Pope Francis, from hospital, prays for Haiti after ‘heinous assassination’ of its president 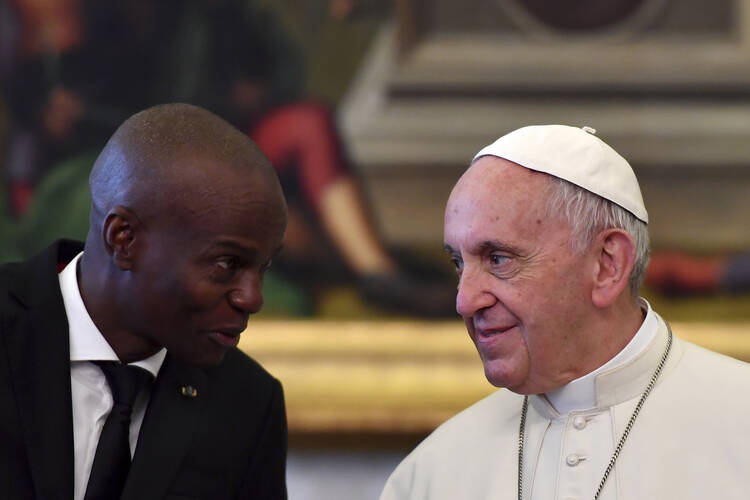 In this Jan. 26, 2018 file photo, Haiti President Jovenel Moise meets with Pope Francis during a private audience at the Vatican. (Alberto Pizzoli/Pool Photo Via AP)

ROME (AP) — Pope Francis on Thursday sent his condolences to Haiti following what he said was the “heinous assassination” of President Jovenal Moïse.

Francis, who is recovering at a Rome hospital from intestinal surgery, condemned “all forms of violence as a means of resolving crises and conflicts,” according to a telegram signed by the Vatican secretary of state

The message said Francis was praying for the Haitian people and for Martine Moïse, the wife of the slain president who also was critically injured in the Wednesday attack at their home. Authorities said that during the gunbattle, police killed four suspects, detained two others and freed three officers being held hostage.

Pope Francis on Thursday sent his condolences to Haiti following what he said was the “heinous assassination” of President Jovenal Moïse.

Prime Minister Claude Joseph assumed leadership of Haiti and decreed a two-week state of siege following Moïse’s killing, which stunned a nation grappling with some of the Western Hemisphere’s highest poverty, violence and political instability.

Francis said in the telegram that he “wishes for the dear Haitian people a future of fraternal harmony, solidarity and prosperity.”

In January 2018, Moïse met with Francis and Vatican officials for talks on social problems afflicting the Caribbean nation, “especially regarding young people, the poor and the most vulnerable,” the Holy See said at the time.

In 2015, Francis convened a special conference on Haiti to mark the fifth anniversary of the devastating earthquake that killed more than 100,000 people.

Francis has been recovering at a Rome hospital since undergoing intestinal surgery Sunday. The telegram was sent in his name and signed by his deputy, Cardinal Pietro Parolin.