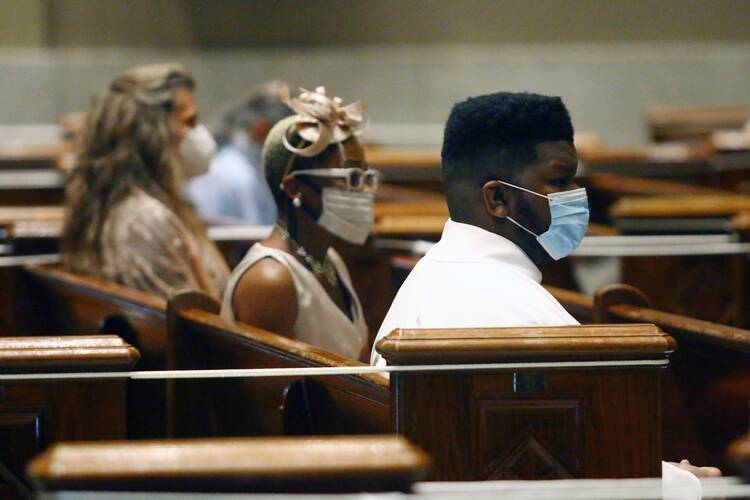 Lamont Gee of Philadelphia waits in a pew at the Cathedral Basilica of SS. Peter and Paul to serve as cantor at a Mass for the end of the 2019-2020 school year. (CNS photo/Sarah Webb, CatholicPhilly.com)

WASHINGTON (CNS) — As news events made headlines across the United States for months last year — particularly the 2020 election, the coronavirus pandemic and racism in America — priests’ homilies did not mention these events nearly as much as did sermons by Protestant preachers, according to a report issued July 8 by the Pew Research Center.

Compared to their Protestant counterparts — whatever the stripe, be it mainline, evangelical or historically Black — Catholics brought up the rear when it came to sharing at least one sermon about the election last fall. Overall, 67% of churches did, but just 41% of Catholics. And just 19% of Catholic parish websites mentioned the election, compared to 28% of all churches surveyed.

While 20% of Catholics’ election-referenced homilies encouraged voting — on par with all Christian sermons surveyed — just 36% discussed issues, candidates or political parties, the lowest percentage of all Christian groups.

Catholics brought up the rear when it came to sharing at least one sermon about the election last fall.

During the time period studied — which not only included the election but the pandemic and months of racial protests spurred by the murder of George Floyd by a Minneapolis police officer — Catholics came up last in those two categories as well.

While 69% of Catholic parishes heard at least one sermon relating to COVID-19, at least 82% of other Christian denominations registered hearing a sermon on it. And just 32% of Catholics heard a sermon mentioning racism, while 44% of Protestant Christians did.

The Pew study, “Pastors Often Discussed Election, Pandemic and Racism in Fall of 2020,” conducted its analysis is based on the texts of 12,832 sermons shared online by 2,143 U.S. religious congregations — nearly all of them Christian churches — delivered between Aug. 31 and Nov. 8, 2020, a period Pew noted that included the presidential election and the Sunday following Election Day.

Just 32% of Catholics heard a sermon mentioning racism, while 44% of Protestant Christians did.

“There are a couple of fundamentals at work” on why Catholic mentions of topics in the news may not be as prominent in sermons as those by Protestants, said Dennis Quinn, a computational social scientist for Pew, who was the principal researcher for the study and a similar one based on sermon texts from 2019.

The Mass, Quinn said, will “by definition be more structured than the services of other groups. That reduces the opportunity for this happening, like an election” mention. Also, “Catholic homilies are by and large shorter than the sermons or homilies of other groups,” he noted, which means priests have “substantially less time” to get a point across.

The Mass, Dennis Quinn said, will “by definition be more structured than the services of other groups. That reduces the opportunity for this happening, like an election” mention.

“Even among Catholics who were the least likely to talk about the three topics we look at in the study, fewer than half of the congregations at least touched on the election,” Quinn told Catholic News Service in a July 7 phone interview.

“All else aside, Americans were essentially deluged with information in 2020 about the issues that dominated the airwaves. We can see here that the hours spent in the pews was not a respite from that informational deluge,” he said.

The 36-page study was split fairly evenly between the results and the methodology.

“Among the congregations included in this study for which researchers were able to identify a religious tradition, 52% were evangelical Protestant; 22% were mainline Protestant; 4% were Catholic; and 1% were historically Black Protestant churches,” the Pew study said.

“Catholic homilies are by and large shorter than the sermons or homilies of other groups,” he noted, which means priests have “substantially less time” to get a point across.

Quinn noted they were weighted to more closely reflect each faith group’s presence in the U.S. population. “Because Catholic congregations are so much larger,” he said, “there are far fewer of them. We could end up with a ton of evangelical Protestant (churches in the study otherwise) because they are so much smaller.”

Compared to the first survey of sermon texts from 2019, fewer homilies from 2020 were examined. Quinn acknowledged that many houses of worship were closed for months last year, yet at the same time — because they lacked the ability to deliver their message face-to-face — churches more aggressively posted sermons online.

Pew included sermon excerpts from Catholics and other denominations without identifying whose words they were.

One Catholic homily, given at the end of the survey period, said, in part: “Today, we are reminded to be ready for anything in life, to be a people prepared not only to deal with the pandemic and a messed-up presidential election, but to remember that we are to follow on the path of those wise virgins. To have not only our own lamps lit, but to have extra oil with us just in case. Like it or not, we need to be prepared to meet the Lord when he does call us home.”

Another, that addressed racism, said: “The murder of George Floyd has blown open the terrible evil of individual and institutional racism that serves the dominant culture so well. Whether blatant or hiding menacingly under the surface, (journalist and author) Roxane Gay wrote that we Blacks live with the knowledge that a hashtag is not a vaccine for white supremacy. We live with the knowledge that, still, no one is coming to save us. The rest of the world yearns to get back to normal. For Black people, normal is the very thing from which we yearn to be free.”