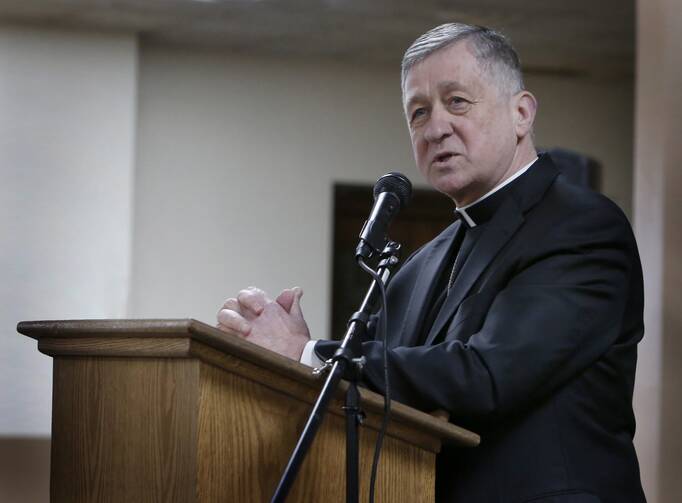 In the latest of a series of visitations of Vatican dicasteries, Pope Francis has asked Chicago’s Cardinal Blase Cupich to lead a team to evaluate the Vatican’s Dicastery for Promoting Integral Human Development, the Vatican confirmed today.

The Director of the Holy See press office, responding to journalists’ questions, said the visit is to be seen “in the context of a normal examination of the activities of the dicasteries,” which aim to get “an updated presentation of the conditions in which they operate.” America has learned from other sources that the visit will begin next week.

As archbishop of Chicago since 2014, Cardinal Cupich has shown considerable organizational talent. The visits will reportedly begin next week.

As archbishop of Chicago since 2014, Cardinal Cupich has shown considerable organizational talent. He played a major role in the organization of the February 2019 Vatican summit on the protection of minors that included presidents of the bishops’ conferences and major religious superiors. Pope Francis personally chose him, Helen Alford, O.P., and Pier Francesco Pinelli to work as a team for this evaluation, according to sources.

Sister Alford, who was born in London and is a member of the Dominican Sisters of Saint Catherine of Siena, will be one of Cardinal Cupich’s assistants. She is vice rector of the Pontifical University of St. Thomas (“the Angelicum”), an ordinary member of the Pontifical Academy of Sciences and a consultor of this dicastery. She has a doctorate in management engineering from Cambridge University. A former dean of the Angelicum’s faculty of social science, and author of numerous publications on management theory and corporate social responsibility, she has taught subjects related to economic ethics and the history of Christian social thought in various universities.

The cardinal will also be assisted by a top Italian manager, Pier Francesco Pinelli, a graduate in engineering from Rome’s La Sapienza University, who has spent much time overseeing and restructuring Italian institutions in the energy sector and in the cultural world. He has wide experience in the field of management consultancy, including with Bain and Company and Netplan Management Consulting. He is said to have been involved in the original structuring of this Vatican dicastery.

As part of the ongoing reform of the Roman Curia, Pope Francis issued a motu proprio in August 2016, creating the new dicastery from the merger of four previously separate pontifical councils.

As part of the ongoing reform of the Roman Curia, Pope Francis issued a motu proprio on Aug. 17, 2016, creating the new dicastery from the merger of four previously separate pontifical councils: Justice and Peace, Cor Unum, the Pastoral Care of Migrants and Itinerant People, and the Pastoral Care of Health Workers. He decreed that the merger would take effect on Jan. 1, 2017, and that the Ghanaian cardinal Peter Turkson would be its prefect.

At the same time, he approved the statutes for that new dicastery for a five-year experimental period. That period is now reaching its end.

Francis has already this year ordered reviews—which he called “visits,” not “evaluations”—of two other major Vatican offices: the Congregation for Divine Worship and the Discipline of the Sacraments and the Congregation for the Clergy, as he prepared to appoint new leadership to both. He entrusted those tasks to Italian bishops. Vatican News recently reported that this would be the likely pattern that the pope would follow for other Vatican offices in advance of a change of leadership.

According to the 2016 statutes, the Dicastery for Integral Human Development is headed by a prefect, assisted by a secretary and at least one undersecretary who could be members of the lay faithful. Appointments to these leadership positions are normally for a five-year period but can be renewed for a second term.

Cardinal Peter Turkson has been prefect of this dicastery since 2017 and is now the most senior African working in the Roman Curia. He will be 73 on Oct. 11. Prior to that he was president of the Pontifical Council for Justice and Peace from October 2009 to December 2016.

The secretary of the dicastery is a French monsignor, the Rev. Bruno Marie Duffé, who will be 70 in August. Vatican sources told America he is resigning from the post on July 1 to return to his homeland.

Pope Francis appointed an adjunct secretary, the Argentine priest, the Rev. Augusto Zampini, 51, in April 2020. One month earlier, the pope had asked the dicastery to create a commission, in collaboration with other dicasteries of the Roman Curia and other organizations, to express the church’s solicitude and care for the whole human family facing the Covid-19 pandemic. Five working groups were subsequently created, which are governed by a directorate consisting of the prefect, the secretary and the adjunct secretary.

Most Vatican dicasteries have one or two undersecretaries, but the Dicastery for Promoting Integral Human Development currently has four: the Spanish monsignor Segundo Tejado Muñoz, 60, and the Italian Nicola Riccardi, O.F.M. who is 55, the Czech-born Canadian Cardinal Michael Czerny S.J., who will be 75 in July, and Fabio Baggio, C.S., who is 56 and a member of the Scalabrini missionary order. The latter two have responsibility for the dicastery’s section for migrants and refugees that responds directly to the pope.

As of today, the dicastery has a total staff (including the prefect) of 49, of whom 23 are women (5 are women religious), 12 are laymen and 14 are clerics. (Source: Annuario Pontificio, 2021). The commission for Covid has additional personnel.