It’s legitimate to debate President Biden receiving Communion. But we should consider our own worthiness, too. 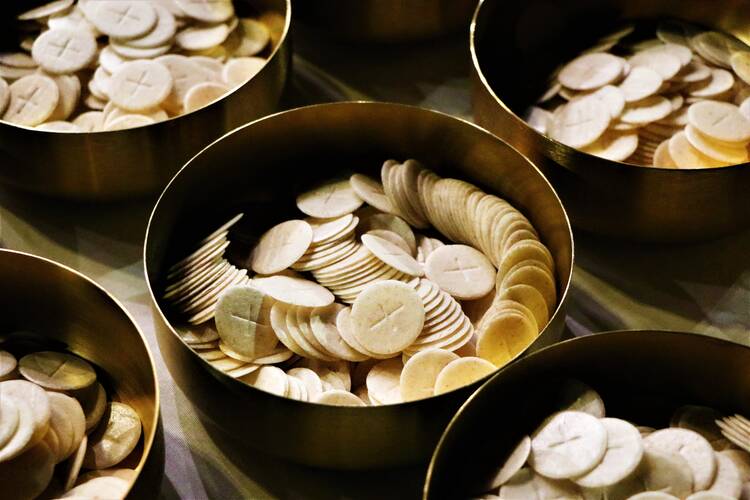 Photo by Eric Mok on Unsplash

One of my favorite quotes comes from St. Pio of Pietrelcina, known affectionately as Padre Pio: “It would be easier for the world to exist without the sun than without the Holy Mass.”

Ponder that for a moment.

Padre Pio was a priest, friar and mystic of the 20th century, whose hands bore the wounds of Jesus Christ’s crucifixion.

People visiting his friary San Giovanni Rotondo near Foggia, Italy, would often report that his hands would bleed when he celebrated daily Mass, which he would celebrate for hours at length.

Much has been written about the U.S. Catholic bishops’ discussion on eucharistic coherence and how it applies to President Biden. Perhaps too much. But I tend to agree with Simcha Fisher, who plainly stated in her recent article for America:

I am not saying that the issues of who can and cannot, should and should not receive the Eucharist aren’t important or relevant. They’re important because the Eucharist is the source and summit of our faith, and if questions about it are not relevant to us, then what possibly could be?

I recommend Simcha’s article and the complete coverage of this story by America because it encompasses an honest and informed discussion about these important matters from different, and at times  diverging, perspectives. It also keeps the Eucharist front and center.

As a lay woman, I have always tried to follow the “3Bs”: Believe, belong and behave.

In April, Archbishop Samuel Aquila of Denver weighed in as part of a series called “The Conversation with America Media.” He reminds all of us that the “Eucharist is a gift, not an entitlement.” He thoughtfully delineates the complicated issues underlying the often contentious debate about the question of who is worthy to receive the Eucharist. He wrestles with the thorny aspects as he strives to find a balance between the prophetic and pastoral roles of a bishop, who is called to teach, govern and sanctify the faithful.

As a lay woman, I have always tried to follow the “3Bs,” which I learned from the late Rev. Charles Green, a former pastor of Saint Augustine Catholic Church in Washington, D.C.: Believe, belong and behave.

Believe what the church teaches; belong to the church through baptism; and behave according to those teachings. The body and blood of Christ is for members of the Catholic Church who are in a state of grace.

Believe what the church teaches; belong to the church through baptism; and behave according to those teachings.

Of course, the behave part is always a challenge for us. On my podcast this week, professor Timothy O’Malley offers this insight: “If you want to know how Timothy O’Malley deals with this question of eucharistic coherence: Timothy O’Malley is very concerned about Timothy O’Malley.” This kind of self-reflection is essential for navigating the current debate.

Dr. O’Malley is the director of education at the McGrath Institute for Church Life and director of the Notre Dame Center for Liturgy at the University of Notre Dame. He is also the author of the book Real Presence: What Does It Mean and Why Does It Matter?

His perspective offers some much-needed nuance to the current debate. On the one hand, the Eucharist is “intrinsically political” because it is a public act committing every Catholic to transforming the world in love. So, the question around President Biden receiving Communion is a legitimate one.

On the other hand, if those Catholics who insist on denying Communion to the president feel vindicated or take delight in the process, it is a clear sign that perhaps they should not receive Communion themselves. The whole debate, according to Dr. O’Malley, is an invitation to each baptized person to reflect on his or her own eucharistic coherence.

I hope and pray that our discussion will help us better know, love and witness our Lord Jesus in the Blessed Sacrament, as Padre Pio did. Whatever happens in this current debate about eucharistic coherence, we should keep the Eucharist at the center of our lives as individuals and as a church.