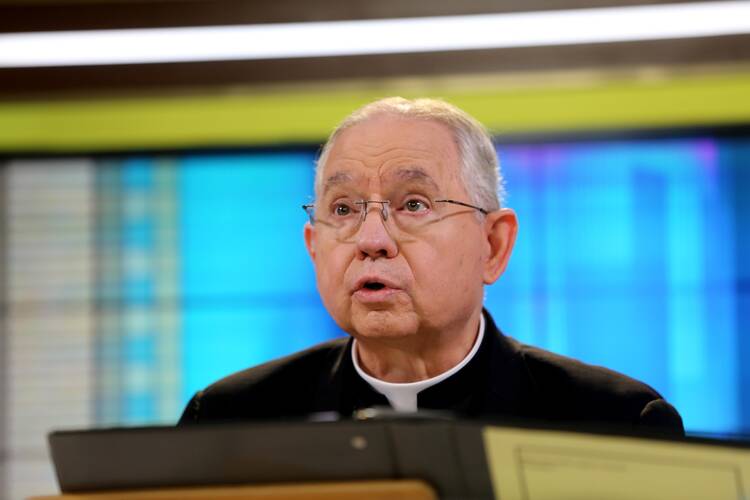 A controversial proposal from the U.S. Conference of Catholic Bishops’ doctrinal committee that seeks approval to begin a process of drafting a document about the Eucharist seems on track to come up for a vote, despite a last-minute effort to give bishops unlimited time to discuss the proposal, a motion that some bishops called “a delaying tactic.”

Critics say the proposed statement, which would touch on the church’s theology about the Eucharist—but also include a section about “Catholics who are cultural, political, or parochial leaders”—could pressure individual bishops to deny Communion to Catholic politicians who support abortion rights. Supporters of the proposal argue recent polls show large numbers of U.S. Catholic either do not agree with or do not understand church teaching on the Eucharist.

Meeting virtually on Wednesday, bishops spent about an hour debating a motion from Archbishop Mitchell Rozanski of St. Louis during what would normally be a routine vote on accepting a draft agenda. But Archbishop Rozanski motioned to grant unlimited time for individual bishops to speak about the proposed document. With just over 260 active bishops registered to attend the three-day long virtual meeting, the motion, if adopted, could have significantly delayed a vote on the proposed statement. Bishops were scheduled to meet in public session for 90 minutes on Wednesday and then again for three hours on Thursday and another 90 minutes on Friday.

Bishops spent about an hour debating a motion from Archbishop Mitchell Rozanski of St. Louis during what would normally be a routine vote on accepting a draft agenda.

Several bishops spoke in favor of Archbishop Rozanski’s motion, but ultimately, the motion failed, with 59 percent of bishops voting against it. A separate vote on accepting the agenda, which includes a vote on the proposed statement scheduled for Thursday afternoon, passed easily with 86 percent support. Bishops are scheduled to debate and vote on the proposed statement on Thursday, though results will not be made public until Friday afternoon.

Some bishops accused Archbishop Rozanski of trying to stall discussion on what has become a contentious proposal.

Archbishop Joseph Naumann, the head of the bishops pro-life committee, called Archbishop Rozanski’s motion “a delaying tactic that will make it impossible to get this document to be voted upon in a timely manner.”

At least one other bishop agreed.

“Allowing every bishop to speak would seem to amount to little more than...a delay tactic or a filibuster,” said Archbishop Paul Coakley, who heads the Archdiocese of Oklahoma City.

Several bishops spoke in favor of Archbishop Rozanski’s motion, but ultimately, the motion failed, with 59 percent of bishops voting against it.

But other bishops took issue with that characterization, with several saying that the virtual format of the meeting made it difficult to engage in meaningful dialogue. During the roughly hour-long debate, several technical glitches were evident, with some bishops being called on to speak who had not requested the floor, bishops having trouble unmuting their microphones and in one instance, an archbishop being caught in a feedback loop that created an eerie robotic noise.

“Rather than see this as a delay tactic, it seems that some of the brother bishops want to rush this discussion, and to focus the emphasis on a teaching document on the Eucharist about whether our Catholic president is able to receive Communion,” said Bishop John Stowe, head of the Diocese of Lexington, Ky.

Bishop Stowe was one of nearly 70 bishops who had signed a letter last month urging the head of the U.S.C.C.B., Archbishop José Gomez, to delay the vote on the proposed statement until bishops gather in person in November.

“At the very minimum, I think we need to be able to hear every bishop on this issue, as Archbishop Rozanski has proposed, and take our time with something that is so important and so delicate,” Bishop Stowe said.

“Allowing every bishop to speak would seem to amount to little more than...a delay tactic or a filibuster,” said Archbishop Paul Coakley.

During the discussion, Archbishop Gomez read from a letter written to him by Archbishop Joseph Augustine Di Noia, adjunct secretary of the Congregation for the Doctrine of the Faith, in which he told Archbishop Gomez his office “looks forward to the informal review of the eventual draft of a formal statement on the meaning of the Eucharist in the life of the church.”

But last month, the head of the Congregation for the Doctrine of the Faith, Cardinal Luis Ladaria, urged bishops to seek consensus before moving ahead with plans to create a teaching document on the Eucharist. At least one bishop suggested that the advice was being ignored.

Bishop Shawn McKnight, the head of the Diocese of Jefferson City, Mo., said it was “unfortunate that there’s been a yoking of too many important decisions in this one document without the proper process and the consultation that needs to take place as clearly identified in the letter of Cardinal Ladaria.”

“Some might perceive how this has been brought to us in this fashion as problematic,” he said.

But Bishop Kevin Rhoades, who heads the doctrine committee, said Cardinal Ladaria’s concerns had been addressed because the committee is “no longer proposing a national policy” on who is eligible to receive the Eucharist, which would require approval from Rome.

“We are not intending to propose any kinds of national norms,” Bishop Rhoades said. “We would propose looking at what eucharistic consistency means and the theological and doctrinal background to the church’s discipline.”

Cardinal Blase Cupich, the archbishop of Chicago, said that bishops must have “a full discussion” of the proposed statement because “the language within the draft does cause concern, particularly in view of articles and statements made by members of the hierarchy in the United States.”

A number of high profile bishops have released letters and statements saying that Catholic politicians who support abortion rights, and in some instances naming President Biden, should be barred from Communion.

In recent months, a number of high profile bishops have released letters and statements saying that Catholic politicians who support abortion rights, and in some instances naming President Biden, should be barred from Communion.

“That has colored the perception of this document,” Cardinal Cupich said.

In an address following the debate, the papal nuncio to the United States, Archbishop Christoph Pierre, delivered a speech via pre-recorded video in which he called on bishops to seek unity.

“A singularly important expression of this unity is the communion between local churches and the See of Peter,” the nuncio said, adding, “we need to be a church that follows the method of Jesus, which is one of accompaniment and dialogue, a dialogue directed toward salvation.”

“Can we be a church that facilitates this encounter with God through our proclamation and patient dialogue?”

In his presidential address, Archbishop Gomez also talked about the need for unity in the church.

“It’s not realistic to expect the church to stay immune from the pressures of division. Those pressures are all around us,” he said. “So, we need to guard against the temptation to think about the church in simply political terms.”

[Joe Biden, the Bishops & Vatican II: The Battle Over the Brand of U.S. Catholicism]