On Juneteenth, look to the biblical prophets and the Black Lives Matter movement 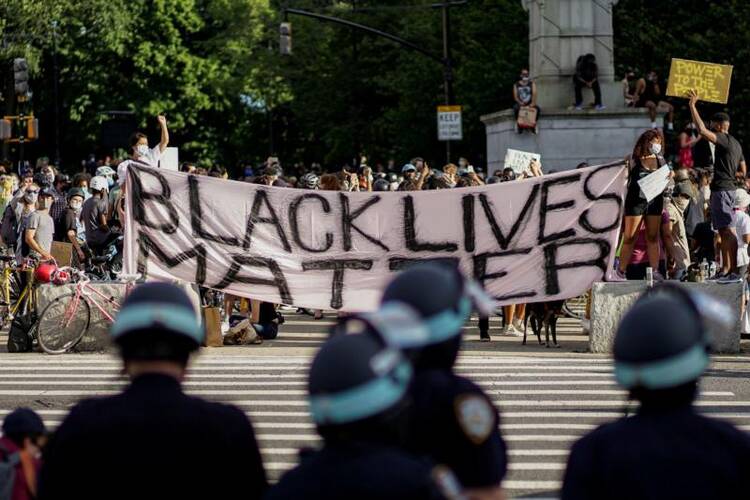 The Black Lives Matter movement began in 2013 after the murder of Trayvon Martin in February 2012, but its attitudes, frustrations and goals are centuries in the making, building on the long history of resistance and resilience of black people. Most recently, the public murder of George Floyd cast another bright light on the racism that persists in the United States, and the calls for change are loud.

Yet, some still balk at the movement, seeing progress as evidence that the fight for racial justice is over. Some even promote a counter-narrative of “All Lives Matter,” which misses the point, intentionally or unintentionally, that the Black Lives Matter movement is a reaction to the fact that many black people have been discriminated against, targeted and disregarded. Black Lives Matter, the civil rights movement and the foundational activism beforehand exist because policies, practices and lived experience reveal that all lives are not treated equally. At this moment of palpable energy and tension, and with so much at stake, we need to finally create a just society for all people. The biblical prophets can help us to understand what is happening now, and they can inspire our continued efforts in the future.

Black Lives Matter, the civil rights movement and the foundational activism beforehand exist because policies, practices and lived experience reveal that all lives are not treated equally.

Many of the biblical prophets were social critics. Their primary work was not to predict the distant future but to be a voice for the present. They confronted pressing issues and gave advice to correct and strengthen relationships between their communities and God. On this Juneteenth, when we celebrate the freedom of slaves in the United States, many are inspired to continue to work for justice and equality that have not been fully realized. This is a good time to reflect on ancient prophets who have much in common with today’s activists.

Huldah was a prophet during a time when many people were worshipping false gods. Altars were erected for these deities. Offerings were made, and people failed to keep the commandments that God had given their ancestors. Concerned, saddened and inspired by legal tradition, King Josiah of Judah sent religious and political officials to consult Huldah. She warned of divine anger and punishment because of the people’s abandonment of God’s laws (2 Kgs 22:16-17). Yet God would deal favorably with the king because of his humility and openness to divine guidance. Moved by Huldah’s prophetic word, Josiah set in motion a series of reforms to dismantle the prohibited religious practices and rectify the community’s relationship with God (2 Kgs 23:1-20).

Huldah’s prophetic critique led to drastic, tangible reforms to a system that had become corrupt. King Josiah had religious leaders tear down altars, pillars and sacred poles used to worship Canaanite gods such as Baal and Asherah. They defiled and burned high places used for unsanctioned practices. Idolatrous priests were deposed and killed.

Josiah’s reformation was an extreme statement against corruption. Physically removing the cultic sites helped his community repair their relationship with God. While Josiah’s techniques were impactful, his killing of idolatrous priests shows a dangerous measure that should not inspire acts today. Nonetheless, there are notable parallels between past and present reforms.

This Juneteenth, when we celebrate the freedom of slaves in the United States, is a good time to reflect on ancient prophets who have much in common with today’s activists.

As a part of the current efforts to combat racism, monuments of historical figures connected to conquest, slavery and inequality are being taken down. Some cities had begun the process years ago, but in this moment, many places have seen activists taking the lead by defacing, destroying and removing statues, many of which were erected as intimidating reminders of white dominance.

While Josiah and his officials took Huldah’s words as a call to action, not all people were eager to listen to prophets. For instance, centuries before Josiah’s reform, King Ahab consulted prophets about going to war but only wanted to hear from people who had good prophecies to share. He initially did not call upon the prophet Micaiah, saying, “I hate him, for he never prophesies anything favorable about me, but only disaster” (2 Chr 18:7). When he finally heard Micaiah’s prophecy, which was unfavorable to Ahab’s vision, he had Micaiah imprisoned.

Ahab’s interest in only good prophecies has many parallels to President Trump and his fixation on good media coverage. Reports that are critical of his policies, rhetoric and actions are often deemed “fake news.” Rather than acknowledge issues and present concrete solutions, the president and his administration often deny or minimize problems and spin bad news to sound good. He even garnered political support by suggesting a rival, Hillary Clinton, be arrested.

Black Lives Matter and the Catholic Church
The Editors

Against all who are working toward justice and equality there will be counter-protesters who refuse to see what is clear because it threatens the status quo and requires change from comfortable norms. The naysayers who lift their voices should not stop the cause, but it is wise to recognize the hurdles, particularly when some of these opponents are in positions of power.

Jeremiah speaks of the adversaries he faced as a prophet. He encountered false prophets who told deceitful prophecies of good outcomes when things were clearly bad (Jer 14:13-16). He was arrested and beaten by Pashhur, a priest who oversaw policing in the temple (Jer 20:1-6). Jeremiah’s own community threatened his life and rejected his prophetic message (Jer 11:18-23).

Despite the difficulties of being a prophetic voice, the struggle before us now is too important not to keep speaking out for justice and change. The prophet Micah is a prime example of this tenacity. Micah spoke out against people who hoarded wealth and had monopolies on land: “They covet fields, and seize them; houses, and take them away; they oppress householder and house, people and their inheritance” (Mic 2:2). He condemned wicked rulers, saying they “abhor justice and pervert all equity” (Mic 3:9). He did not call out only political leaders but also corrupt priests and prophets for taking bribes (Mic 3:11). He prophesied against all people who benefited from injustice and inequality. Micah was fearless, as all great instruments of change must be.

Scripture shows us many examples of the impact of the prophetic voice which can incite change or contempt. The biblical prophets show the power of raising one’s voice, a sentiment that many people realize can be a dangerous but necessary task. It should come as no surprise that the black national anthem begins with a call to raise our collective voice:

Lift ev’ry voice and sing,
’Til earth and heaven ring,
Ring with the harmonies of Liberty;
Let our rejoicing rise
High as the list’ning skies,
Let it resound loud as the rolling sea.
Sing a song full of the faith that the dark past has taught us,
Sing a song full of the hope that the present has brought us;
Facing the rising sun of our new day begun,
Let us march on ’til victory is won.

(“Lift Every Voice and Sing,” written by James Weldon Johnson and set to music by J. Rosamond Johnson)