A spiritual diary about getting the ordinary, miraculous Covid-19 vaccine 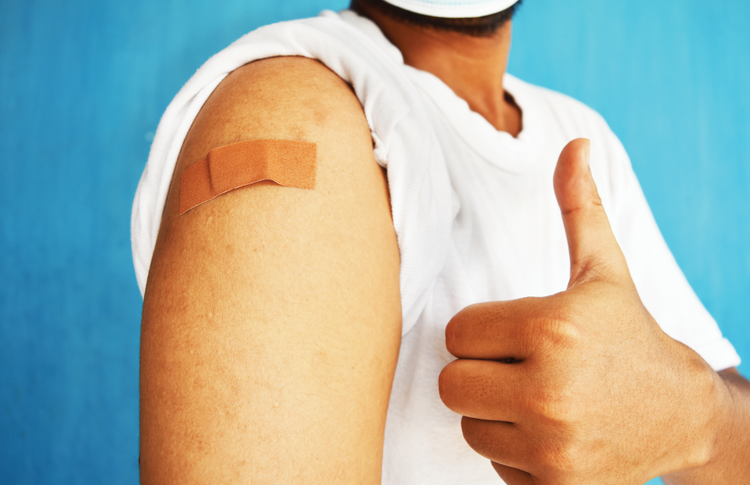 The quickest way to get to vax from Crown Heights is to take the No. 4 or No. 5 train straight to Grand Central. You don’t have to transfer at Atlantic Ave-Barclays like you do getting to the America office near the Diamond District, where jittery men wearing diamonds stand in front of diamond stores to sell passersby diamonds. And where, in making the transfer, you go by a guy slouched on the floor against the wall. Every day he’s there, soiled gray shirt, unshaven, a cartoon-thief-tiptoeing-with-a-money-bag kind of unshaven, who just as you’re about to take the steps down to the B train, bays in a dismal voice, Can anyone help me?I’m hungry, can you please help me get something to eat? He directs his voice straight at you as you go by him, demanding your attention. The same tone, same register, day after day.

But no, on this day you don’t commute past meal pleaders and diamond sellers but go straight to Grand Central to get the No. 7 train, which goes west to the Javits Center where you’ll get vax.

Where the life you save with vax may be the baying man, the diamond men.

And we who were there were not entirely surprised that someone from the street a few minutes before Mass was yelling into the cream and gold nave, flanked by Mychal Judge’s twisted steel and a thousand mute saints. This kind of thing happens in this church on a not entirely irregular basis. And maybe fitting because soon the fire, the water, Christ has died, got no vax, but then was given, you could say, vax, and now he’s back on his feet no matter what anyone says about vax but nevertheless would probably be charmed, Christ, by the brogue warning about suspect national medicines at a church named after St. Francis who himself probably would have invited the Irishman in for some wine.

And after the man is gently ushered out of church they light a tall cauldron in the middle aisle, the room goes dark, a lone voice rises, and men slapping djembe drums dance toward the flame, a roaring South African hymn reclaiming the space. Two years since Vigil fire, cold baptisms, rude salvation and awesome.

You are getting vax for all of them.

Nevertheless, on the No. 5 train to vax, just two days later, Easter Monday, my thoughts all run in one direction: blasé, whatever, not a big deal, just doing this. I try to feel the moment but can’t. Getting vax for distant others? It is not front and center. It is just something I do because now I am eligible.

Getting vax for distant others? It is not front and center. It is just something I do because now I am eligible.

Maybe it is not a big deal because we’re America, we’re the West. We finally figured it out. In the end the science finally won. We took care of business. And besides, in this country Covid only drives 2 percent of the infected into the grave, right? All in all, we got this.

At the Javits Center, four or five aisles were roped off with vinyl bands like an airport. Normal things. I showed my phone, confirmed my appointment. Usual. Sent to a table for further questioning: ID, qualification (over 30), allergies, reactions, defects; just another medical visit.

Then I got up and went where they directed me, down past these rows of information-taking tables, to another line leading to where they give the shots. And it’s then that something wells up. I’m walking to the place where the thing will actually happen, and suddenly I am all but stridingdown a causeway, catwalk, red carpet, to get to vax, life, miracle. Do you realize how insanely quick it was they turned this baby around and conjured up vax? (Like all overnight sensations, of course, it took years of preparation.) It is happening.

I asked Tanya, “How does it feel to be ending a pandemic?”

And while I’m not exactly weeping heading to the nurse’s stations, I am traversing the felt conditions for the possibility of tears. A once-in-a-century American revival tent healing, where everyone running this thing is so nice and calm and orderly, sitting behind very fine black molded plastic tables or standing giving directions near rope lines throughout this vast, glass and girders convention center way out by the river on the edge of town and it’s happening. The rescue of a desperate people in this slow-moving, diffuse way; shot after shot after shot, helping end this insane pandemic and all its unique and particular hells.

Like the opera singer who early on went back to Ohio to live with his family where they didn’t distance, didn’t take it seriously; and after he got Covid and went to the hospital, forced himself to keep his eyes open.For four days. For four days lying in a hospital bed the man did not close his eyes. He was afraid he would never open them again. The only thing that kept him alive, he said, was deep opera breaths. And furious at his family, who had scoffed at the pandemic and now he’s lying there doing warmups for Don Giovanni, eyes open 96 hours and enraged. Covid almost took him to the 2 percent and now here we are with vax and yeah, I guess I’m feeling it.

My nurse wears a pink speckled smock. It’s about to happen. I ask her name. Tanya. I tried to be charming with Tanya (an instant death blow for charm). But no, I wasn’t trying to be charming. I wanted to connect with my nurse, insistent she know how grateful I was for this, my first shot. I asked Tanya, “How does it feel to be ending a pandemic?”

She laughed shyly as if she had never heard that before. A blushing, “Me, putting to route a pestilence?” kind of thing. She did not say what I assumed she would: “Yes, yes, ending a pandemic. I’ve heard it a thousand times from deficient charmers like you.” But no, truly, looking at me like she had never been told You are saving the world. Are you kidding me? Not everyone is saying, “You are saving the world!” to Tanya? What kind of monsters live around here?

Everyone running this thing is so nice and calm and orderly.

I rolled up the left sleeve of the black long-sleeve shirt I wear far too many days of the year, and she gave me the shot.

The vaccine (mine was Pfizer-BioNTech) is what is called an mRNA vax. It shoots into your body material that gives your cells instructions for how to make a spike protein—the crown-like protein that our lung-destroying coronavirus manufactures. This spike protein, though, when by itself, is harmless.

The vaccine shot injects a recipe for your body to make, you could say, something that looks like a wolf, but is actually a sheep in a wolf’s mask. But seeing these sheep in wolf’s clothing, other cells will train themselves to take up arms against a sea of wolves, even though this time around the intruder is harmless, not actually a wolf. But the next time an actual wolf comes, the body will have a memory of how to fight it and destroy it.

Tanya is shooting into my body a lie, a trick, a high-level war game, a fabrication of possibilities maybe never needed, and I take it and love it because the lie put in the body is serving a greater good. And welcome, vax.

Like the welcome I offered as I followed the Communion line at the Easter Vigil and passed a newly baptized guy in the front row, about an hour after the Irish interloper loudly encouraged us not to take the vaccine. “Welcome!” I said to this bearded young man in his cinched and perfect white robe. I just want to offer you my gratitude, my assurance you are saving the world somehow, channeling whatever energy you accrued in that water out to the rest of us. I get vaccinated for you, you get baptized for me; both seeping out into a country that got the science right, and oh so little else—diamond districts mocking one-note beggars and the paranoid lost, the 2 percent stacked with bodies of the poor. But these two medicines, vax and sacred water, training the cells to fight what infects us; to give us all a second chance. A chance to get things right around here, or at least a bit less wrong.