The four Thomas Merton books you have to read 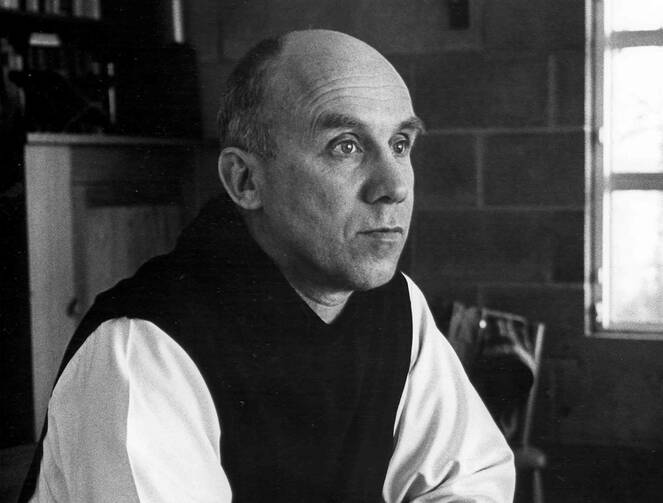 My mind has been occupied by Thomas Merton a lot lately. I wrote a book about his life, Thomas Merton: An Introduction to His Life, Teachings, and Practices, which was published on May 18. My Thomas Merton was one of those “labor of love” projects that had gestated for 35 years, since I first visited the Abbey of Gethsemani over spring break during my sophomore year in college. That is the monastery in Kentucky where this Trappist monk—who is also, I believe, the most important Catholic writer in English in the 20th century—lived from April 1941 until his accidental death in December 1968 at the age of 53, which is the age I am now.

The essential Merton is all of these books taken together. Read them all, and in this order, if you can.

I refer to many of his books in my book. I also talked with Merton experts and enthusiasts as to how they feel about the man and the continued relevance of his writing. And the other day I conducted a poll on my Twitter feed, asking people to select the Merton book they most often recommend. I offered four options, which I will now share with you, along with the results.

This will always be Merton’s most renowned book. It is the confident narrative of a recent convert to the Roman Catholic faith, the story of a monk who felt he had left the world behind in order to find truth. Perhaps its most famous sentence is the following, as the author recalls how he felt upon arrival at the monastery: “So Brother Matthew locked the gate behind me and I was enclosed in the four walls of my new freedom.”

The religious certainty can be surprising to readers who come to Merton first through his later work.

He had gone to the monastery thinking he would stop trying to be a poet and a novelist, but then his abbot instructed him to resume writing. To everyone’s astonishment, The Seven Storey Mountain outsold all other nonfiction books published in 1948-49, and suddenly the monk who had wanted to live anonymously became a famous writer and celebrity.

The storytelling is powerful, and the religious certainty can be surprising to readers who come to Merton first through his later work.

New Seeds is a beautiful book, one of only a handful of Christian spiritual classics of the 20th century. It is here that Merton develops the distinction between the true self and the false self—the most essential of his teachings. Here it is, in essence, in three short sentences:

1. “Every one of us is shadowed by an illusory person: a false self.” Consider all that we do, often daily, even more often than that, not to engage with who we are truly meant to be. Simply on a physical level—we use entertainments, food, sex, overwork, stimulants and other things to evade our true selves.

New Seeds is a beautiful book, one of only a handful of Christian spiritual classics of the 20th century.

2. “This is the man I want myself to be but who cannot exist, because God does not know anything about him.” (You will have to forgive those masculine pronouns in his writing.) While doing those illusory things, we think we are happy, but we are not. Most important, God does not know the person who is evading and escaping. God knows who we truly are.

3. “To be unknown of God is altogether too much privacy.” The false self leads us to being alone without being unique, without discovering how each one of us is, in some vital and real ways, singular before God.

This was Merton’s favorite among his own books, and it still probably shocks some readers today. Why would a Catholic monk devote so much time to understanding and communicating the wisdom of a Chinese philosopher who lived three centuries before Christ? In the preface to the book, he mysteriously says that the right way of life in the world should never be to try finding a way “out” of the world, but also that “Chuang Tzu would have agreed with St. John of the Cross, that you enter upon this way when you leave all ways and, in some sense, get lost.”

In the last decade of Merton’s life, he was becoming willing and able to live in the mystery of things.

So, you can see how evolved this was from what Merton had written earlier in The Seven Storey Mountain (and other subsequent books).

In the last decade of Merton’s life, he was becoming willing and able to live in the mystery of things, finding God in the questions that are without answers. The religions of the East taught him this, and then he went back and found the same teachings in the Catholic spiritual tradition.

One gets an excellent sense of all of these progressions, and more, by reading the private journals of Merton. These are journals that were not released for publication until 25 years after his death, according to the provisions of Merton’s literary estate. They began to appear in the 1990s.

They follow his life in chronological order, from the pre-monastic jazz-clubber in Greenwich Village to the first years in the monastery to the final year traveling throughout Asia, meeting with the Dalai Lama and seeking deeper ways of contemplation. The seven titles of these journal volumes say a lot about their contents: Run to the Mountain; Entering the Silence; A Search for Solitude; Turning Toward the World; Dancing in the Water of Life; Learning to Love; The Other Side of the Mountain. The bestseller by far is volume 6, in which we read the intimate details of Tom’s affair with “M,” a nurse in Louisville, how they were found out, and then how and why he decided to stop seeing her and rededicate his life to his monastic vows.

The essential Merton is, in fact, all of these taken together. Read them all, and in this order, if you can. Meet the over-confident, sometimes reactionary, convert Merton of the autobiography first. Then read his spiritual classic of monastic wisdom for people living anywhere in any era. Follow him next to the East, where he and we may broaden our understanding. Then delve into the details of his life in the journals, where there are so many moments of crankiness and poor judgment (he remained very human), deep understanding and quiet reflection, revealing that Thomas Merton lived a life that was extraordinary, but also ordinary, as each of us may hope to do.

Jon M. Sweeney is the author of many books, including Thomas Merton: An Introduction to His Life, Teachings, and Practices, new from St. Martin’s Press and Penguin Random House Audio.