Lay people have been passing on the Catholic faith for 2,000 years. Now Pope Francis has made it an official ministry 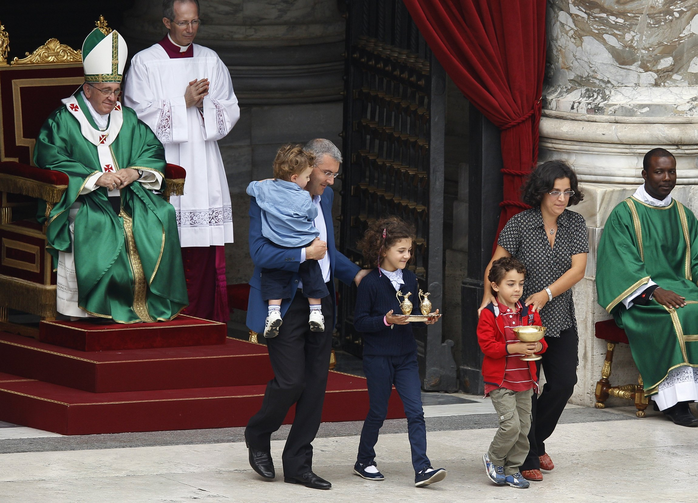 Pope Francis watches as a family carries offertory gifts to the altar during a Mass for catechists in St. Peter's Square at the Vatican in this Sept. 29, 2013, file photo. In a document released May 11, 2021, Pope Francis instituted the "ministry of catechist." (CNS photo/Paul Haring)

Today, Pope Francis established the lay ministry of catechist in the Catholic Church. In the apostolic letter “Antiquum Ministerium” (“Ancient Ministry”), Francis explained that the establishment of this lay ministry does not diminish in any way the mission of the bishop who is “the primary catechist in his diocese.” Rather, it gives “recognition” to “those lay men and women who feel called by virtue of their baptism to cooperate in the work of catechesis.”

The decree takes effect on May 11 and will open the way for many of the more than three million lay women and men catechists around the world to be formally installed into this ministry by the local bishop.

“From the beginning, the Christian community was characterized by many different forms of ministry carried out by men and women who, obedient to the working of the Holy Spirit, devoted their lives to the building up of the Church,” Pope Francis said. “At times, the charisms that the Spirit constantly pours out on the baptized took on a visible and tangible form of immediate service to the Christian community, one recognized as an indispensable diakonia for the community.”

In the apostolic letter “Antiquum Ministerium,” Pope Francis explained that the establishment of this lay ministry does not diminish in any way the mission of the bishop who is “the primary catechist in his diocese.”

He recalled that the Second Vatican Council underlined the fact that “within the broader charismatic tradition of the New Testament, we can see that certain baptized persons exercised the ministry of transmitting in a more organic and stable form related to different situations in life the teaching of the apostles and evangelists.”

Today, too, Pope Francis said, “many competent and dedicated catechists are community leaders in various parts of the world and carry out a mission invaluable for the transmission and growth of the faith.” This reality was highlighted during the Synod of Bishops for the Pan-Amazon Region, in 2019. Remote communities of the Amazon often rely on the leadership of lay women and men because of a shortage of priests.

From the beginning of his pontificate, Francis has sought to implement the teaching and directives of the Second Vatican Council, and he sees the establishment of “the lay ministry of catechist” as doing exactly that. He recalled in the letter that “beginning with the Second Vatican Ecumenical Council, the church has come to a renewed appreciation of the importance of lay involvement in the work of evangelization.”

Since then, he said, popes, bishops’ conferences and individual bishops “have contributed to a significant renewal of catechesis.”

“Today, too, the Spirit is calling men and women to set out and encounter all those who are waiting to discover the beauty, goodness, and truth of the Christian faith,” he said. “It is the task of pastors to support them in this process and to enrich the life of the Christian community through the recognition of lay ministries capable of contributing to the transformation of society through the penetration of Christian values into the social, political and economic sectors.”

He recalled that St. Paul VI, “with great foresight,” had encouraged bishops’ conferences “to promote other ministries” in addition to lector and acolyte, “including that of catechist.” Turning to our own day, Pope Francis said, “the reception of a lay ministry such as that of catechist will emphasize even more the missionary commitment proper to every baptized person, a commitment that must however be carried out in a fully ‘secular’ manner, avoiding any form of clericalization.”

He invited the bishops’ conferences “to render effective the ministry of catechist, determining the necessary process of formation and the normative criteria for admission to this ministry and devising the most appropriate forms for the service which these men and women will be called to exercise in conformity with the content of this Apostolic Letter.”

“Today, too, the Spirit is calling men and women to set out and encounter all those who are waiting to discover the beauty, goodness, and truth of the Christian faith,” he said.

He said the episcopal authorities in the Oriental churches may also adopt what he decreed here.

The four-page decree was presented at a Vatican press conference by Archbishop Rino Fisichella, the president of the Pontifical Council for Promoting the New Evangelization. He revealed that five years ago Pope Francis asked the council to prepare for the establishment of this ministry, and it has consulted the bishops’ conferences on this matter in the intervening years.

He remarked that since Francis comes from Argentina, he knows that catechists often take the lead in a great number of faith communities in Latin America. Responding to questions, the archbishop emphasized that “the catechist has not primarily a liturgical role.” The institution of this lay ministry, he said, “is to valorize the ministry of the catechist.”

He said its establishment today as a lay ministry in the church “should not be seen as a substitute for priests or consecrated persons.” On the contrary, he said, the ministry of catechist is “an authentic lay vocation,” rooted in the person’s baptism.

Francis has instructed the Congregation for Divine Worship and the Discipline of the Sacraments to publish “the Rite of Institution of the lay ministry of Catechist” and said the congregation will publish it “soon.”