‘I realized that it was my purpose to help others’: How Jesuit values led one Cristo Rey alum to fight for health equity 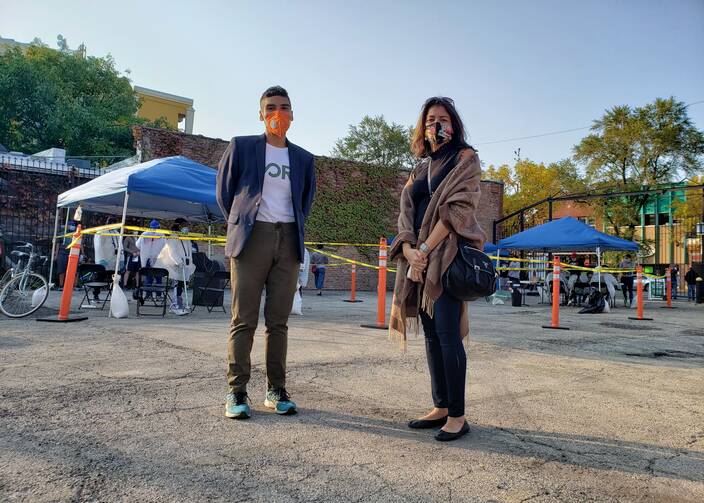 Miguel Blancarte Jr. with Ivonne Sambolin, the Director of Community Engagement at the Chicago Department of Public Health, at a Covid-19 testing site in Chicago's Humboldt Park neighborhood. Photo courtesy of Mr. Blancarte.

In 2020, Miguel Blancarte Jr. became the director of Covid-19 Response and Community Outreach at Esperanza Health Centers in Chicago, Ill. The organization’s five sites provide bilingual health services to primarily minority communities irrespective of immigration status or economic situation. Since the onset of the pandemic, Mr. Blancarte has been instrumental in organizing Esperanza’s efforts to aid the city’s residents.

Mr. Blancarte attended Cristo Rey Jesuit High School on the Lower West Side of Chicago, the founding school in the Cristo Rey Network of affiliated college preparatory institutions. The Cristo Rey Network created a corporate work study program that gives students experience in corporate environments. On five school days a month, students work an entry-level job at organizations like American Express, HarperCollins, JPMorgan Chase and others. Mr. Blancarte credits the program for much of his continued success. He received his B.A. in political science from Brown University in 2009 and graduated from Georgetown University with a joint M.B.A. and M.S.F.S. in international business and policy events in 2018.

This interview has been edited for clarity and length.

How would you describe your time at Cristo Rey, and what was it like being part of the corporate work study program?

One of the drivers behind me going to Cristo Rey was my mother. My mom fell in love with the corporate work model and she tried selling it to me. First, I wasn’t necessarily so keen on it because of where my friends were going to be going, but ultimately I made my way to Cristo Rey. And I’m extremely glad that I did.

My first corporate work study program placement was with Brinson Partners, now part of U.B.S. Global Asset Management. I was working in one of the nicest buildings in the city of Chicago, the Rookery Building, and it was very different from anything I had ever experienced.

My dad went to school until the third grade, and my mom until the sixth grade. I’m a first generation American. I went up to Brinson Partners and got to meet so many different folks, and it was an eye opening experience. It exposed me to the downtown area and corporate America and to a different type of work than was available in my community.

I grew up in a predominantly Latino community. A lot of them are first generation Americans or migrants. Even Cristo Rey was mostly Latino. Downtown, I saw white folks, I saw black folks, I saw Asian folks. It was an experience that really awakened me.

What kind of work did you do?

A lot of it was clerical work. My first year, I worked in the records management department. I also worked in the marketing department of a law firm, and even human resources. It was entry level, but it was experience I received that allowed me to see how processes and different systems work. I definitely enjoyed it.

The people there also wanted to help me. As a teenager, you’re very new to a lot of things. You want feedback and guidance, and my coworkers definitely provided that. They made me see what else was out there. Even managing records or doing H.R., you get to see how all of this works.

How did you bring the experience of doing corporate work study at Cristo Rey with you to college and beyond?

Jesuit values and that tradition were very prevalent at Cristo Rey. When I was growing up, I always tried to do the right thing and help people, but it was going to a Jesuit school like Cristo Rey that made me realize how important those values really were to me. As I became a young adult and I started formulating myself a little more, I realized that it was my purpose to help others.

I remember in third grade my teacher said, “Miguel, you would make a great lawyer.” That was the first time a person mentioned that career to me. It always stayed in the back of my head, especially since people kept telling that to me. I thought that I was going to go to law school, but life kind of happens, right? I can continue helping others but I don’t need to be an attorney. I don’t need to be in a courtroom. My Jesuit education helped me realize that, too.

It was at my time at Georgetown that it all came together for me. The School of Business and the School of Foreign Service had a program that I felt was tailored to me. I fell in love with it. Doing an executive education program at Georgetown, everything came full circle: the education I received at Cristo Rey, the importance of the corporate work program, connecting my purpose with what I wanted to be doing. The program at Georgetown made me realize how important the Jesuit tradition of finding solutions to social problems was to me.

Can you talk about how you started working in community health in Chicago?

Last year in May, Chicago announced that they would be doing community-based testing for the coronavirus. They noted that the first site they were going to open was literally going to be across the street from me. So, I said, “I want to help. I want to do something.” I showed up even before they opened and said I wanted to volunteer.

At first, it was simple stuff: helping the elderly, delivering food to families, things like that. They ended up offering me the position of site director. I wasn’t expecting it. At the time, it was the zip code that was most affected by Covid in the entire state of Illinois.

I did a lot with that site and it was extremely successful. In August, I got a visit from the federal government. They’d heard about the great work I’d been able to do. At the time there was no blueprint for this. There was no roadmap. I had to figure it all out on my own. I was asked to replicate what I did at other sites and throughout the city.

Now [at Esperanza Health Centers], I deal with everything from testing to vaccine distribution. We’re really focused on bringing health equity to our communities. Being in my community, paying it forward, helping out others—it’s just extremely rewarding. I work every day, seven days a week, even holidays. But what drives me are the values that I got from Cristo Rey and from my time at Georgetown.

How an 11-month school year and 10-hour days help prepare boys in Phoenix to be men for others
J.D. Long-García

You’re also not the only Cristo Rey graduate in your family. Your sister also went there and she became a nurse in Chicago, right?

Yes, her name is Alma Yvonne Blancarte. When I started working for the testing site, she was a nurse at Lurie Children’s Hospital and now she’s doing Covid-related work at Rush University Medical Center, where she also went to grad school.

I didn’t realize that Esperanza and Rush were finalizing a grant together, and this grant binds my sister and me. She’s doing it from the Rush side and I’m doing it from the Esperanza side. So, we’ve kind of been working together on a couple of different projects addressing public health.

And it made me feel good about our family. She’s working for one of the major hospitals, I’m working with a federally qualified health center. She received the Pfizer vaccine; I received the Moderna vaccine. It was all very serendipitous. We’re two siblings cut from the same Cristo Rey cloth with different experiences and trajectories but are working together now.