This is not God’s justice: George Floyd and the Derek Chauvin trial 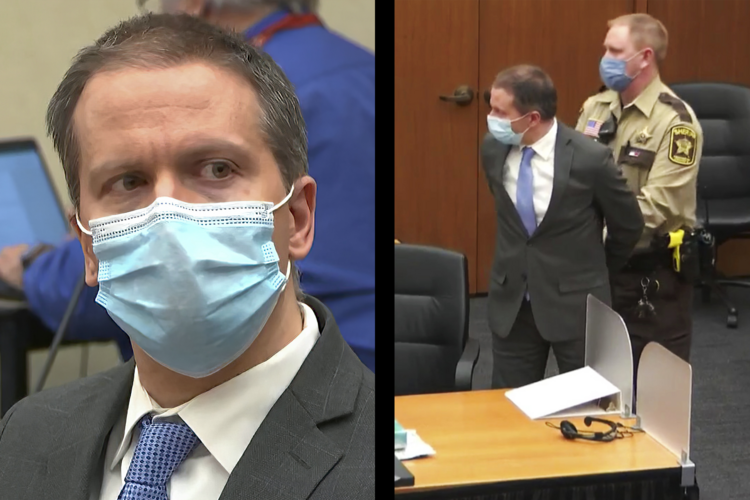 Former Minneapolis police officer Derek Chauvin listens as the verdict is read in his trial for the 2020 death of George Floyd, Tuesday, April 20, 2021, at the Hennepin County Courthouse in Minneapolis. (Court TV via AP, Pool)

Nearly one year after Darnella Frazier, then a teenager, stopped and filmed the final minutes of George Floyd’s life, a nation watched a livestream of three verdicts read out in steady succession. Derek Chauvin will spend up to 40 years in prison for murdering Mr. Floyd.

The images of Chauvin’s eyes darting around the room above his mask as he heard his verdict read, the shot of him walking off camera in handcuffs, the push notifications, the social media feed refreshing. What did it all evoke?

“There is not a word for this feeling,” Doreen St. Felix wrote on Twitter immediately following the reading of the verdict, “but it is extremely painful.”

What is this feeling?

Even if this is justice, it is still a disappointment, at best.

“I would not call today’s verdict justice,” Minnesota Attorney General Keith Ellison, the lead prosecutor in the state’s case against Mr. Chauvin, said. “Because justice implies true restoration. But it is accountability, which is the first step toward justice.”

And herein lies the problem, the restlessness we feel when we are told this is justice. Justice implies true restoration, and there is no way to restore George Floyd’s life or any of the lives robbed by white supremacy. So we are left to settle for this version of justice.

Justice implies true restoration, and there is no way to restore George Floyd’s life or any of the lives robbed by white supremacy.

This justice might be American justice, but it is not God’s justice.

What is God’s justice? I won’t pretend to know or say with any certainty what it will look like. I suspect that whatever it is it would offend all of us in this life, the way that the parable of equal wages and forgiving seventy times over offends the logic and systems that we have devised for our society.

God’s ways are not our ways. Theologians have always stumbled when explaining how Jesus’ crucifixion was “just” in a divine sense. A Catholic politician tried again yesterday: Nancy Pelosi thanked George Floyd “for sacrificing your life for justice.... Because of you and because of thousands, millions of people around the world who came out for justice, your name will always be synonymous with justice.”

Derek Chauvin needed to be convicted. But whether it was for the integrity of the American legal system, our social contract or simply for a modicum of relief for a family, I can’t say. But I cannot call it justice. I don’t know what to call it.

George Floyd has already become larger than one single person, and his legacy will be fought over for generations. But he was also a human being. A particular, individual person who mattered, who could not breathe, who was murdered, who now is with perhaps the only one who knows what to call what happened yesterday.

Zac Davis is an associate editor and the director for audience engagement and analytics America. He also co-hosts the podcast Jesuitical.