Don’t call Dorothy Day a saint. But a ferry? Sure. 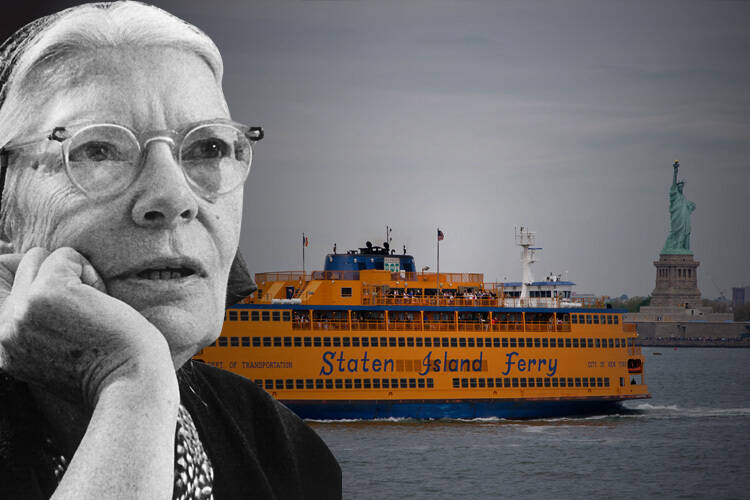 Dorothy Day may be under consideration for sainthood, but should that not pan out, at least a new Staten Island Ferry will soon bear her name.

Mayor Bill de Blasio announced on March 25 that a 4,500-passenger ferry boat, the third in a new fleet being added to the city’s transportation arsenal, will be named for Day, the founder of the Catholic Worker Movement whose cause for sainthood is being considered by the Vatican.

Dorothy Day is one of Staten Island’s proudest daughters, and we’re dedicating a NEW Staten Island Ferry to her. She believed in her borough, her neighbors and taking care of each other. pic.twitter.com/A92UVhMZWS

“My grandmother loved Staten Island and treasured her trips on the Staten Island Ferry, the rare time when she could relax and be free of her many responsibilities,” Kate Hennessy, the author of Dorothy Day: The World Will Be Saved by Beauty, said in a press release from the mayor’s office. “While we in her family may find it difficult to line up her selfless work with honors such as this, we nevertheless thank Mayor de Blasio and Staten Islanders for this generous consideration.”

Day founded The Catholic Worker newspaper and served at a number of hospitality houses in New York, serving the poor without reliance on government aid. In 2000, the church declared her a “servant of God,” putting her on the path to sainthood, and in 2012, her cause received support from the U.S. Conference of Catholic Bishops.

Dorothy Day may be under consideration for sainthood, but should that not pan out, at least a new Staten Island Ferry will soon bear her name.

Speaking to Congress in 2015, Pope Francis singled out a handful of exemplary Americans, including the Rev. Martin Luther King Jr., Abraham Lincoln and Day.

“In these times when social concerns are so important, I cannot fail to mention the Servant of God Dorothy Day, who founded the Catholic Worker Movement,” the pope said. “Her social activism, her passion for justice and for the cause of the oppressed, were inspired by the Gospel, her faith and the example of the saints.”

Cardinal Timothy Dolan, archbishop of New York, welcomed the news about the new ferry being named for Day.

“How providential that the ferry from lower Manhattan to Staten Island should be named after a brave, loving woman who cherished both those areas of our city and the people who live there,” he said. “How appropriate that a ferry transporting people would honor a believing apostle of peace, justice, and charity who devoted her life to moving people from war to peace, from emptiness to fullness, from isolation to belonging.”

Called to Be Saints: Why I support the canonization of Dorothy Day
Robert Ellsberg

Day was born in Brooklyn in 1897 and moved to Staten Island as an adult. She joined the Catholic Church while living there and maintained a small cottage on the island until the end of her life.

Various Catholic Worker ministries were located on Staten Island, and Day described her time there as a retreat from her busy ministry in Manhattan.

“One of the joys of Staten Island is that one can get down there after a grueling day in New York, and for thirty-five cents find oneself on a deserted beach,” she wrote in one of her newspaper columns.

Starting in 2022, those seeking to escape Manhattan for Staten Island will be able to make the trip for even less than 35 cents: Trips aboard the Dorothy Day, like all rides on the Staten Island Ferry, will be free.