‘It is our duty to love and defend’ LGBT Americans: Bishop Stowe breaks with U.S. bishops on the Equality Act 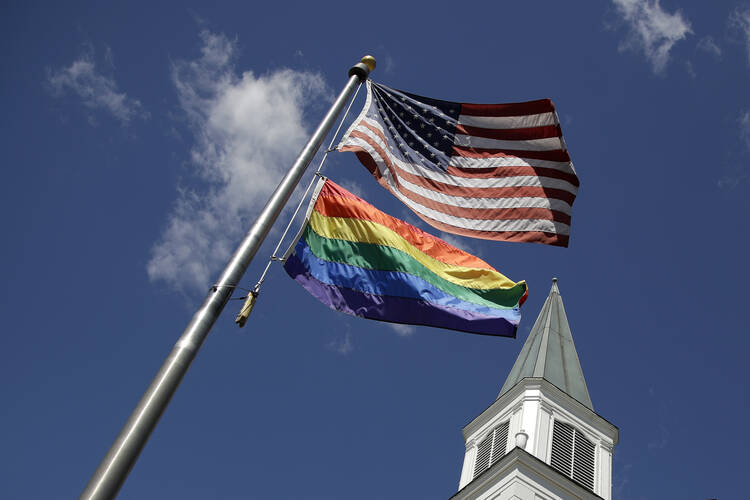 While the U.S. Conference of Catholic Bishops has made defeating the Equality Act a priority, citing concerns over religious freedom, at least one U.S. bishop has thrown his support behind the ban on discrimination against lesbian, gay, bisexual and transgender people, saying that fighting the measure sends the wrong message to L.G.B.T. Catholics and their families.

“LGBTQ people reflect the image of likeness of God, just as anyone else, and so it is our duty to love and defend them,” Bishop John Stowe, the head of the Diocese of Lexington, Ky., wrote in a March 19 letter to Senator Dick Durbin and Senator Chuck Grassley, the two highest-ranking members of the Senate Judiciary Committee. “As a Catholic bishop, I hate to see any form of harmful discrimination protected by law and it is consistent with our teaching to ensure that LGBTQ people have the protection they need.”

Bishop Stowe, one of about a dozen bishops who recently signed a statement in support of an effort to curb bullying against L.G.B.T. people, said in his letter, obtained by America, that he is “grateful for many LGBTQ Catholics who serve and lead their communities with distinction. Their perseverance, their grace, and devotion to the common good has made Catholic communities holier and has edified our nation.”

The U.S. bishops’ conference has made defeating the Equality Act a priority, citing concerns over religious freedom.

He continued, “It is deplorable that, while LGBTQ persons contribute to our society in many ways, they can be denied basic protections in housing, employment, and in many other areas of life.”

Last year, in a 6-3 ruling, the Supreme Court said the Civil Rights Act of 1964 applied to L.G.B.T. workers when it comes to barring discrimination on the basis of sex. Civil rights groups have encouraged Congress to pass legislation following up on that decision. The Equality Act would prohibit discrimination in housing, employment, public accommodations and health care by making sexual orientation and gender identity protected classes.

Some Catholic critics of the legislation, including the U.S.C.C.B., say the bill would limit religious liberty by forcing faith-based institutions, including hospitals, schools and charities, to provide services that go against their religious beliefs. Last month, five bishops who lead U.S.C.C.B. committees wrote a letter to members of Congress urging them to vote against the Equality Act, arguing that provisions in the law would “discriminate against people of faith.”

Cardinal Timothy Dolan, the archbishop of New York who heads the U.S.C.C.B. religious liberty committee, put it more sharply, writing in an essay on March 16, “The Equality Act seems to go out of its way to target religion.”

Bishop Stowe: ‘As a Catholic bishop, I hate to see any form of harmful discrimination protected by law.’

“The Equality Act goes far beyond the noble desire to protect vulnerable people,” he added. “It burdens consciences and severely curtails the rights of religious people to be free to practice their faith.”

Twenty-nine states offer some protections for L.G.B.T. people, and the Equality Act would extend protections to all Americans. But the U.S.C.C.B. questioned if discrimination against L.G.B.T. people existed to such an extent that it warranted federal action.

In a briefing paper on the Equality Act, the bishops’ conference said that Catholics support “appropriate” nondiscrimination measures for people “regardless of their sexual inclinations.”

“However,” the paper continues, “‘LGBT’ people are not subject to systemic discrimination on the scale that has historically warranted the creation of a new federal policy, such as was necessary when the Civil Rights Act was passed. Widespread patterns of segregation or denial of basic goods, services, or opportunities to people who identify as ‘LGBT’ are not evident.

In a briefing paper, the bishops’ conference said that Catholics support “appropriate” nondiscrimination measures for people “regardless of their sexual inclinations.”

“On the contrary, ‘LGBT’ people today are often held in high regard in the market, as well as the academy, local governments, and media. Some studies suggest that people who identify as homosexual earn higher incomes than the national average,” it reads.

Other critics of the bill say that it could force Catholic hospitals and medical workers to provide services that go against church teaching.

Mary Haddad, R.S.M., who heads C.H.A., wrote: “Certain services directly related to gender transition could present a potential conflict for some faith-based health care providers. The Equality Act could be found to mandate such services.”

She said the Equality Act “lacks conscience protection language and precludes application of RFRA” and worries “there may be no opportunity to find a balance between the free exercise rights of health care providers and others with moral or religious objections to providing certain health care services and the ability of those who seek such services to receive them.”

Under the bill, faith-based agencies that receive federal funding would not be permitted to discriminate against L.G.B.T. people.

The bill maintains longstanding exemptions for houses of worship and other religious institutions—for example, they could limit employment to people who shared their faith’s beliefs and could refuse to perform same-sex marriages.

But faith-based homeless shelters and adoption or foster-care agencies that receive federal funding would not be permitted to discriminate against L.G.B.T. people. And it would be more difficult for a wide range of businesses to justify anti-L.G.B.T. discrimination, regardless of personal or religious beliefs.

That could mean that Catholic charitable organizations might not be eligible for government contracts, putting things like shelters, food pantries and adoption agencies at risk unless they comply with the law, the U.S.C.C.B. argues.

For his part, Bishop Stowe wrote in his letter that he understands fears about religious liberty.

“I naturally must insist that the right to practice and live in accord with the teachings of one’s faith must be protected and churches should not be forced to enact practices in violation of their tenets,” he wrote. He added that he “cannot condone any expansion in abortion access or threats to the sanctity of life” but concluded that he “must be forthright in stating this, I do not believe that the Equality Act would compromise our beliefs on this matter.”

In an interview with America, Bishop Stowe said, “it’s a difficult thing to take a stance against what the U.S.C.C.B. published,” but he said that after consulting with a number of theologians, ethicists and other church leaders, the question for him came down to: “How can we take a position against equality?”

Bishop Stowe said he understands the fears about how the bill could infringe on religious liberty should it become law. But he was uncomfortable with what message was being sent to L.G.B.T. Catholics by bishops working to block the Equality Act, especially in light of church teaching that prohibits “unjust discrimination” against gay and lesbian people.

Bishop Stowe said he understands the fears about how the bill could infringe on religious liberty should it become law.

“I wish we could influence the writing of the law in ways that would better protect everybody’s interest,” he said. “In this circumstance, I do believe that the provision of equal justice under law is more important.”

While few high-profile Catholic leaders have endorsed the Equality Act, Bishop Stowe is not alone.

Sister Simone Campbell, who wraps up her tenure of the social justice advocacy organization Network later this month, told The Washington Post that supporting nondiscrimination laws is a pastoral position even if it leads to organizational headaches.

“The frustration is, it seems to me we’re being called to be more pastoral and less bureaucratic,” she said. “My problem is: Why do you want to exclude? In my tradition, Jesus included everyone.”

A report released March 23 by the Public Religion Research Institute says that a majority of Americans, including U.S. Catholics, support measures included in the Equality Act.

U.S. Bishops: If the Equality Act is passed it will ‘discriminate against people of faith’
Catholic News Service

“The data is clear: the vast majority of Americans support LGBTQ nondiscrimination protections no matter where they live, the party they belong to, or the church they belong to,” Natalie Jackson, director of research at P.R.R.I., said in a press release.

According to the report, which is based on a survey of more than 10,000 adults conducted in 2020, when asked if “you strongly favor, favor, oppose, or strongly oppose laws that would protect gay, lesbian, bisexual, and transgender people against discrimination in jobs, public accommodations, and housing,” majorities of Hispanic Catholics (81 percent), white Catholics (77 percent) and other Catholics of color (74 percent) said they do.

Last month, the House of Representatives passed the Equality Act with a mostly party-line vote. Republicans broadly opposed the legislation, with only three voting with their Democratic colleagues to pass the measure. On March 17, the Senate Judiciary Committee held a hearing on the measure, though it is unclear when a vote may occur. At least one Republican senator, Susan Collins of Maine, has pressed for more religious exemptions.

Following the House vote, President Biden said in a statement, “The Equality Act provides long-overdue federal civil rights protections on the basis of sexual orientation and gender identity, locking in critical safeguards in our housing, education, public services, and lending systems—and codifying the courage and resilience of the LGBTQ+ movement into enduring law.”