Remembering Janice McLaughlin, the Maryknoll sister who found freedom in the struggle for African liberation 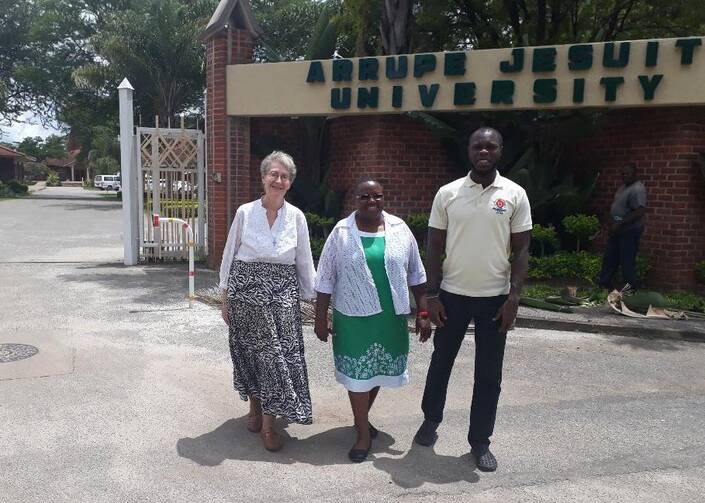 Janice McLaughlin, M.M., former president of the Maryknoll Sisters, died at 79 in the congregation’s motherhouse in Ossining, N.Y., on March 7, following a long illness. Her passing was mourned not only at home but in many parts of Africa, particularly in Zimbabwe, where her role in the struggle for liberation and her tireless service to the people was remembered with honor.

Even as a child she sensed that Africa was her destiny, the roots of her mission vocation found in a fourth-grade geography textbook that pictured giraffes loping across the plain. She joined the Maryknoll Sisters at 18 (as soon as they would take her), and in 1970, after graduating from Marquette University, she received her dream assignment to Kenya.

There she worked for several years in communications and in running courses on journalism for church-sponsored programs. But she was also studying the struggles against colonialism and apartheid in southern Africa. In Rhodesia, as Zimbabwe was then called, a white minority government had seized power following independence from Britain and imposed an apartheid-style system. After years of peaceful protests, Africans had launched an armed struggle, answered by the government with brutal violence.

Janice McLaughlin, M.M.: "I felt bigger than myself. I was suffering for a cause, and the pain and fear no longer mattered. I was not alone."

This was the situation in 1977 when Sister McLaughlin accepted a position as director of communications for the Peace and Justice Commission in Harare, Rhodesia. Much of her work was documenting massacres and other government atrocities. Only three months into her job, her office was raided. Two of her colleagues were released on bail, but she was singled out as a dangerous terrorist sympathizer because of entries in her diary expressing support for the liberation struggle. In the most incriminating line, she had written, “If I had black skin I would join ‘the boys.’” While denying that she was a communist, she told reporters that she supported the freedom fighters and that she believed a revolution was needed “to redress the injustices of the present society. There should be a fairer distribution of wealth and equal opportunities for all.” She was held in solitary confinement for 18 days.

She later referred to this time as the best retreat of her life. With only a Bible to occupy her, she read the Gospel with new eyes: “I felt part of something bigger than myself. I felt bigger than myself. I was suffering for a cause, and the pain and fear no longer mattered. I was not alone. I was with the oppressed people, and God was there with us in our prison cells.” Support came from many sources, including the Vatican, the United Nations and the U.S. State Department, but also from many of her African guards, who quietly whispered words of encouragement. After almost three weeks, she was taken to the airport and deported. A photograph taken as she boarded a plane in what was then called Salisbury shows her waving joyfully, with not a sign of her ordeal.

But as soon as she could she returned to Africa—this time to the forests of Mozambique, where she lived for some years with refugees and exiles from the war in Rhodesia. In April 1980, she was present in Harare to celebrate the installation of Jesuit-trained Robert Mugabe as the new president of the newly renamed Zimbabwe. He asked her help in rebuilding a new educational system in the country, a task she accepted.

From the Shona people of Zimbabwe, Sister McLaughlin had learned one of the names of God: “The One Who Turns Things Upside Down.”

In her many years in Zimbabwe, interrupted by terms of service as communications director for the Maryknoll Sisters and later in 2008 for six years as president of the congregation, she engaged in many forms of service, all aimed at empowering the poor. She earned a doctorate from the University of Harare; her dissertation was on the role of rural Catholic missions in the liberation struggle. She witnessed the fruits of many of her efforts, but also the sad, moral downturn of the Mugabe government, as corruption and repression became prevalent features of the regime. When Mugabe was finally driven from power, she noted that he was still declared a hero by many regional leaders, but she doubted “if his own people will be so forgiving—nor will I. A man who had raised such high hopes for peace, reconciliation, and development in 1980 [had] instead left a legacy of violence, poverty, corruption, hunger, and hopelessness.”

Nevertheless, upon her death, she was memorialized by Mugabe’s successor, President Emmerson Mnangagwa, as “a devout Catholic for whom faith meant the quest for human freedoms.” He noted among other things her arrest and deportation from Zimbabwe and said, “She chose to leave an otherwise quiet life of an American nun to join rough and dangerous camp life in the jungles of Mozambique where she worked with refugees in our education department.”

From the Shona people of Zimbabwe, Sister McLaughlin had learned one of the names of God: “The One Who Turns Things Upside Down.” That was certainly her own experience of God. She had entered deeply into the hearts of, and yearnings of, the African people, a reality deeper than the schoolbook pictures of giraffes. From the people of Kenya, Zimbabwe and Mozambique, she had learned that “people are more important than things; that being is more important than doing; that God and relationships are at the heart of everything.”

Janice McLaughlin, M.M.: “I am a wiser, gentler, more outgoing, more religious, and freer person because of Africa.”

She carried those lessons into a book she published with Maryknoll’s Orbis Books in 2009: Ostriches, Dung Beetles, and Other Spiritual Masters: A Book of Wisdom from the Wild.  Reflections on the traits of various African animals—the solitude of the cheetah, the unconditional love of the hornbill and the caution of the ostrich—led into inspiring meditations drawn from her life in in Africa, including experiences of hardship and struggle: working with AIDS patients and victims of human trafficking, war and exile.

Reflecting on the “courage of the owl,” she turned to her experience in prison: “Never again have I experienced such a sense of solidarity and support. The memory alone continues to give me courage, helping to cast out fear. May the owl remind us that our fears may be baseless and that our worst nightmares may turn out to be our best friends. What we don’t understand and fear may teach us that we are stronger than we thought. If we unite with others for a just cause, we can gain strength from each other.”

Even when illness brought her back to the Maryknoll motherhouse, Africa remained in her soul: “I am a wiser, gentler, more outgoing, more religious, and freer person because of Africa.” She had mastered the flexibility of the giraffe, the humility of the hippo, the perseverance of the dung beetle and the friendship of the velvet monkey.

Robert Ellsberg is the publisher of Orbis Books. Parts of this piece draw from a chapter about Janice McLaughlin in Penny Lernoux’s Hearts on Fire: The Story of the Maryknoll Sisters (Orbis Books, 1993), which he completed after Lernoux’s death in 1989.