The bishops were divided on how to approach Joe Biden. It’s not the first time a dispute has gone public. 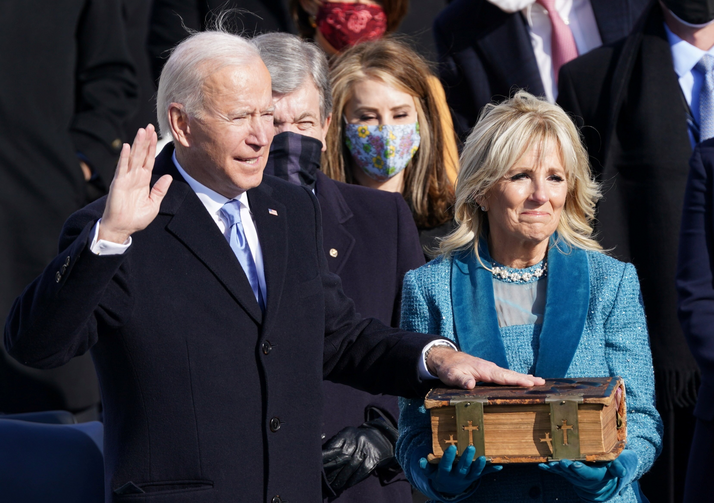 Following the inauguration of President Joseph R. Biden Jr., the head of the U.S. Conference of Catholic Bishops, Archbishop José Gomez, released a lengthy statement, in which he laid out areas in which the bishops may work well with the new administration. But it also included a stinging rebuke of the president’s support for “policies that would advance moral evils and threaten human life and dignity, most seriously in the areas of abortion, contraception, marriage and gender.” Archbishop Gomez’s letter was unusually lengthy and struck some Catholics as tone-deaf, given the present opportunity for a fresh start with a new president.

Among these critics was Cardinal Blase Cupich, archbishop of Chicago, who released his own statement calling Archbishop Gomez’s statement “ill-considered” and said other bishops should have been given an opportunity to weigh in on the statement before it was released. By the end of the day, at least one other cardinal made comments and one other bishop released a statement that was more conciliatory toward Mr. Biden.

In an article for America, I called the public disagreement “rare”; another journalist called it “unusual”; and yet another described it as “unprecedented.”

Bishops in the United States do disagree with one another, however, as evidenced by the floor debates at their twice-yearly national gatherings. Recent examples include the quadrennial discussion about revising the U.S. bishops’ voting guide, how to respond to allegations of mismanagement from a disgruntled former Vatican official and even the amount of money dioceses should pay to support the bishops’ conference. But when the time comes to vote, bishops tend to land mostly on the same page. Still, while disagreeing publicly is indeed rare, it is not unprecedented.

The Rev. Stephen M. Koeth, who studies U.S. church history at the University of Notre Dame, said there have been several high-profile disagreements among the U.S. hierarchy in recent decades.

He points to the 1960 gubernatorial contest in Puerto Rico, when a group of three Catholic bishops frustrated over public education around birth control helped form a political party and released a pastoral letter condemning Catholics who planned to support a rival party. There was public disagreement among bishops as to the wisdom of such a move, especially in light of the pending U.S. presidential election.

In the 1980s, similar disagreements played out on a range of issues.

In 1983, for example, there was a back-and-forth over the drafting of a pastoral letter on nuclear weapons. An early version of the letter said nations must never use nuclear bombs and called for a halt in their production. After pushback from some church leaders sympathetic to the Reagan administration, the document was reworked. The letter still condemned nuclear weapons but softened the language about their outright prohibition.

Perhaps the situation most similar to the disagreement over how to welcome President Biden came in 1987, in a contentious debate about the church and AIDS—albeit with an important distinction that shows just how much the U.S. church has changed in just three decades.

Perhaps the situation most similar to the disagreement over how to welcome President Biden came in 1987, in a contentious debate about the church and AIDS—albeit with an important distinction.

As I recount in my forthcoming book about the Catholic Church’s response to H.I.V. and AIDS, Hidden Mercy, the bishops’ conference released a pastoral letter in December 1987, “The Many Faces of AIDS,” encouraging Catholic entities to respond to the growing epidemic.

By that time, nearly 41,000 Americans had died from AIDS. Public health officials had backed the idea that condoms were effective in the fight against the spread of H.I.V., putting them at odds with Catholic leaders, who pointed to church teaching that prohibits the use of artificial contraception. (Some Catholic theologians argued that if the intended use of the condom was to prevent the transmission of a virus and not to stop a pregnancy, then they could be morally licit.)

The AIDS letter, spearheaded by Cardinal Joseph Bernardin, drafted by a working group of bishops and approved by the conference’s administrative committee before its release, upheld church teaching on sexual morality and condoms. But there was one paragraph that suggested Catholic health care ministries might be able to partner with public health organizations that promoted the use of condoms to fight H.I.V.

Days later, Cardinal John O’Connor, the archbishop of New York, held a press conference at Saint Patrick’s Cathedral to announce that he found the letter’s release to be “a very grave mistake.” He said the church could not bend on moral teaching and said he would lead an effort to retract the document, promising a number of other bishops would join his cause.

Nearly 41,000 Americans had died from AIDS. Public health officials had backed the idea that condoms were effective in the fight against the spread of H.I.V., putting them at odds with Catholic leaders.

Leaders of the bishops’ conference stood by their document, with a few expressing disappointment that Cardinal O’Connor would disagree in such a public manner. A handful of other bishops supported Cardinal O’Connor’s efforts, including Cardinal Bernard Law of Boston and then-Archbishop Theodore McCarrick of Newark. Battle lines were drawn and bishops debated, in private, how to move forward.

The religion scholar Anthony Petro wrote in his 2015 book, After the Wrath of God: AIDS, Sexuality, & American Religion, that the episode was a turning point in how the U.S. church and its leaders related to society, “sacrific[ing] for the sake of a consistent moral vision the church’s reputation as a reasonable contributor to the public discussion concerning AIDS.” Cardinal O’Connor had put U.S. bishops back “in the good graces of the Vatican,” he writes, “but “did so by replacing compromise with absolutism, pluralism with universal truth, and science with good morality.”

The incident also helps demonstrate just how much the U.S. hierarchy has changed since 1987.

In the 1980s, “you probably had more bishops in the conference that you would describe as slightly left of center or center and then a smaller group that you might describe as conservative,” Father Koeth said. “I do think that over time, with John Paul II appointing as many bishops as he did over 27 years, and [Pope Benedict XVI] appointing a number of bishops, that that balance has shifted a little bit.”

In the 1980s, “you probably had more bishops in the conference that you would describe as slightly left of center or center and then a smaller group that you might describe as conservative,” Father Koeth said.

In 1987 Cardinal O’Connor led a small group of bishops in a revolt against the bishops’ conference because of its perceived openness to working with groups that promoted condoms in the fight against H.I.V. The Vatican initially refused to get involved, but Pope John Paul II, who counted Cardinal O’Connor as a key U.S. ally, eventually weighed in and ordered the bishops to be more firm in stating the church’s opposition to condoms. While the original letter was never retracted, Cardinal O’Connor prevailed in the stand-off.

In 1989 the bishops’ conference issued a new letter, “Called to Compassion and Responsibility,” reiterating many of the same themes of the earlier letter but adding a clear denunciation of artificial contraception.

Today, the dynamics have flipped.

But they represent a smaller group of bishops protesting against the priorities of a conference dominated by bishops who have emphasized abortion and religious liberty in recent years.

Similarly to the way Pope John Paul II supported Cardinal O’Connor in 1988, Pope Francis recently met with Cardinal Cupich in a private audience. The meeting, which the Vatican made public, was seen as a signal of support for the cardinal following the dust-up over Mr. Biden. (Then again, days later, the pope also praised Archbishop Gomez during a meeting with journalists from Catholic News Service.)

Whereas the Vatican clearly picked a winner in 1987, it appears the bishops’ conference will continue to debate the best way to engage the new administration without explicit instructions from Rome.

The analogy between the confrontation over “The Many Faces of AIDS” and the more recent standoff over the greeting to the president, however, is imperfect. Whereas the Vatican clearly picked a winner in 1987, it appears the bishops’ conference will continue to debate the best way to engage the new administration without explicit instructions from Rome. The possibility of more public disagreements remains likely.

In recent days, heads of various committees have released a number of supportive statements in response to executive orders signed by Mr. Biden, ranging from the environment (“resonate deeply with an integral ecology that listens to the ‘least of these’”) to immigration (“will help to ensure that immigrants and refugees are treated humanely and in accordance with their God-given dignity”) to food and housing (“a strong commitment to those in need”).

In 2019, ahead of the U.S. presidential election, bishops voted to declare abortion as their “pre-eminent priority.” Some bishops have challenged this understanding of Catholic social teaching, but now that this declaration has been made, finding common ground with the Biden administration may prove elusive.

As Thomas Reese, S.J., wrote in a recent column, the dueling statements from various committees signify a “split in the conference itself.” But he argues it would be a mistake to think the bishops are incapable of finding common ground.