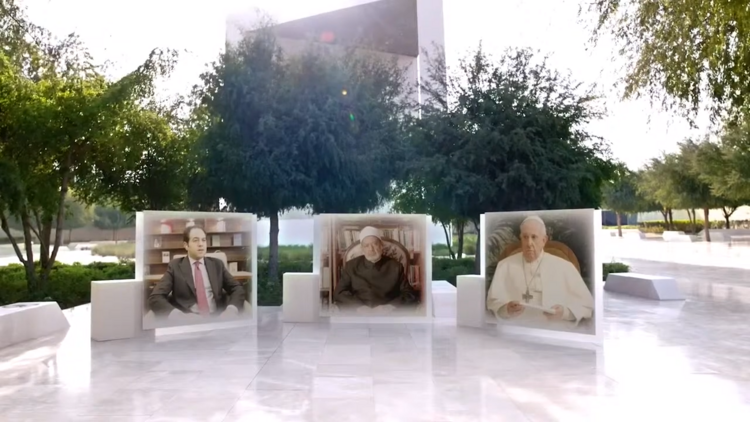 “Fraternity is the new frontier for humanity. It is the challenge of our century, the challenge of our times. There is no time for indifference. Either we are brothers and sisters or we will destroy each other.... A world without fraternity is a world of enemies.” That was the essence of what Pope Francis said as he joined the Grand Imam of Al-Azhar, Ahmad Al-Tayyeb, today, Feb. 4, in an inspiring virtual conference to celebrate the first-ever International Day of Human Fraternity.

The head of the Catholic Church and the head of Al-Azhar gave the world yet another powerful witness of their friendship and commitment to work together for peace among the nations. Speaking at the event, from Rome and Cairo respectively, the religious leaders reaffirmed, as they had done in Abu Dhabi two years ago, the fundamental teaching of their respective religious traditions: that all human beings are created by the one God and are called to live together as brothers and sisters. The event was hosted in Abu Dhabi by Judge Mohamed Abdel-Salam and transmitted worldwide by Vatican Media.

Pope Francis addressed the Grand Imam in words almost certainly without precedent in the relations between a pope and a Muslim leader, greeting him as “my brother, my friend, my companion of challenges and risks in the struggle for fraternity.” The pope thanked the Grand Imam for his “companionship in the journey of reflection and drafting of the document,” which they presented and signed exactly two years ago on Feb. 4 in Abu Dhabi. The document bears the title: “A Document on Human Fraternity for World Peace and Living Together.”

“Your courageous witness has helped me a lot,” Pope Francis said in Spanish to Grand Imam Al-Tayyeb. Even though it was not easy to write the document, “we were able to do it together, helping each other,” the pope said. “The most beautiful thing is that our desire for fraternity was consolidated into true fraternity.”

The Grand Imam, speaking in Arabic, said the document “calls for cooperation, the rejection of intolerance and hatred, an end to wars and the promotion of tolerance and harmony as the path to fraternity and peace.”

He expressed the hope that the annual celebration of the International Day of Human Fraternity “would sound an alarm bell for the world and its leaders” and urge them to “entrench the principles of human fraternity” in society.

He told the global audience, “I am committed for the rest of my life to working with Pope Francis and my brothers and sisters [throughout the world] to make fraternity a lived reality” in the conviction that all people, as brothers and sisters, in spite of their diversity “have a right to live in peace.”

The document on human fraternity has inspired at least three significant initiatives worth noting.

The document led to the establishment of the Higher Committee for Human Fraternity to promote and implement the core agenda of that important text, which, the committee says, “calls for the reconciliation of people of goodwill in service of universal peace.” Judge Abdel-Salam, the host of Thursday’s event, was appointed as the committee’s secretary general. In that role he has involved the European Commission and the United Nations as well as the Vatican. At the event, Pope Francis jokingly hailed the judge as “l’enfant terrible” for his dynamic, creative contribution in assisting him and the Grand Imam in drafting the document.

Pope Francis addressed the Grand Imam in words almost certainly without precedent in the relations between a pope and a Muslim leader, greeting him as “my brother, my friend, my companion of challenges and risks in the struggle for fraternity.”

Thanks to the generosity of Sheikh Mohammed bin Zayed, the crown prince of the Emirate of Abu Dhabi, the document on human fraternity has also led to the institution of the Zayed Award for Human Fraternity. The winners of the prize are decided by an international jury that includes religious and civil leaders. The first recipients of the prize were the pope and the Grand Imam.

At today’s virtual celebration, the 2021 winners of the Zayed Award were honored: António Gutteres, the Portuguese-born secretary general of the United Nations, and Latifa Ibn Ziaten, a Moroccan-French woman who lost her son, Imad, in a terrorist attack in France and went on to found the Imad Association for Youth and Peace in her son’s honor. A third and far-reaching initiative was the proclamation last December by the United Nations General Assembly that the International Day for Human Fraternity be celebrated on Feb. 4 every year, by states and civil society throughout the world, marking the date that the pope and the Grand Imam first signed the human fraternity document in Abu Dhabi last year.

The World Council of Churches invited its member churches to join in today’s virtual celebration.

In his intervention at today’s event, the Most Rev. Justin Welby, the archbishop of Canterbury, described the document as “inspiring” and said that “it points to what we can do together.” He underlined also that “it is friendship that matters in changing what we do.”

Charles Michel, the president of the European Council, speaking from Brussels, thanked the pope and the Grand Imam for inspiring this International Day. “A day of human fraternity is needed today more than ever, as the world battles the Covid pandemic,” he said. “Today reminds us that the only way out of this global crisis is through greater fraternity—and solidarity—between peoples.” Mr. Michel added: “The more we see each other from afar, the more we see our differences. The more we look each other in the eye, the more we see our own reflection. Our common humanity.”

To mark the day, the Pontifical Council for Interreligious Dialogue has launched a special website, making content available in English and Italian.

Today’s celebration is another milestone on a journey that started in the Vatican when Pope Francis and the Grand Imam first met on May 23, 2016. It continued with Pope Francis’ visit to Cairo in April 2017 and reached a high point with their joint-signing of the human fraternity document in Abu Dhabi two years ago today. Judge Abdel Salam has documented this journey in a book that will be published later this year in Arabic and English. It is a journey that, as the words of these two religious leaders make clear, is far from over.