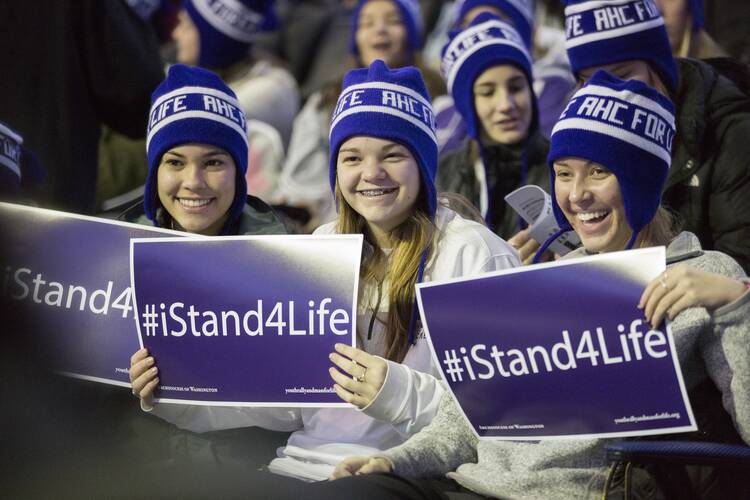 Students from the Academy of the Holy Cross in Kensington, Md., hold signs during a pro-life youth rally and Mass at Capital One Arena in Washington Jan. 19 before the annual March for Life. (CNS photo/Jaclyn Lippelmann, Catholic Standard)

Washington, D.C., is usually buzzing at this time of year with groups of high school students who have flocked to the nation’s capital for the March for Life. But the event will be held virtually this year due to public health and safety concerns, so schools and their students are marking the 48th anniversary of Roe v. Wade a bit differently. When the march’s organizers announced on Jan. 15 that they would move the event online, Jesuit high schools across the country sought to find creative ways to help students honor life at all stages.

Boston College High School made a plan to bring the community together to consider life and dignity issues even while they were doing remote instruction, tailoring practices that are already a regular part of student life to the occasion. As John Mark, the director of the school’s Center for Ignatian Identity and Formation, told America, “we focused our morning prayer and the community-wide Examen on life—protection for the unborn as well as those on death row.”

In Aurora, Colo., a group of faculty and students at Regis Jesuit High School will participate in a two-day retreat “to reflect on what it means to build a culture of life,” according to Catherine Cole, a theology teacher and retreat coordinator at the school. “Students will discuss, pray and reflect on where their hearts are calling them to be a person who promotes the dignity of life.”

When the march’s organizers announced on Jan. 15 that they would move the event online, Jesuit high schools across the country sought to find creative ways to help students honor life at all stages.

The retreat’s first day will also offer students an opportunity to hear from speakers and to participate in a service project, making gift bags for new mothers in need. On the second day, participants will virtually attend Georgetown University’s Cardinal O’Connor Conference on Life.

Students from St. Ignatius College Prep in Chicago also plan to attend the Cardinal O’Connor Conference. Community prayer has been a central feature of their celebration of life this year, and according to Adam Gonzalez, the junior class chaplain and a moderator of the school’s Respect Life club, it is important that all students have the opportunity to safely participate in their programs even in a modified Covid-19 learning environment: “We are...in the midst of offering both Mass and a Holy Hour for students over the course of two school days, which would allow any student who would like to attend one or the other to do so based on our current hybrid schedule.”

Because Covid-19 safety protocols prohibit them from organizing group outings as they would in other years, Mr. Gonzalez said that students and staff at St. Ignatius College Prep have been engaging on an individual basis with the Chicago March for Life team, connecting students to their local community. Students and community members attended a pro-life car rally, where they heard from a religiously and politically diverse set of speakers and a car parade that led them to the South Side of Chicago, where a truckload of diapers was donated to a women’s center.

“The students explored what it means to be pro-life today, how the movement has been hurt by extremism...and how to balance the call to protect life at all stages without glossing over the acute issue of abortion.”

Even though the March for Life’s usual stomping grounds are right in their own backyard, high school students in Washington, D.C., will also keep their social distance from the event. Over 100 students from a handful of D.C.-area schools, including Jesuit schools Gonzaga College High School and Georgetown Preparatory School, participated in a program for prayer and discussion on Jan. 28.

Patrick Sullivan, a religion teacher and co-moderator of the Eagles for Life Club at Gonzaga College High School, described the students’ discussion: “The students explored what it means to be pro-life today, how the movement has been hurt by extremism, why empathy is paramount to discussions surrounding abortion and how to balance the call to protect life at all stages without glossing over the acute issue of abortion.”

Mr. Sullivan described the collaboration between the schools as an asset to the program, sharing that they were able to hear a variety of perspectives on crucial life issues as they interacted with conversation partners from beyond their own school communities.

While he helped to moderate the event, Mr. Sullivan said that the students really took the lead. Their active engagement was encouraging to him. “For me and the other adult facilitators, hearing their hope and genuine desire to promote goodness was uplifting and, I think, a needed challenge to the cynicism and gridlock that has plagued the political conversation around pro-life issues,” he said.