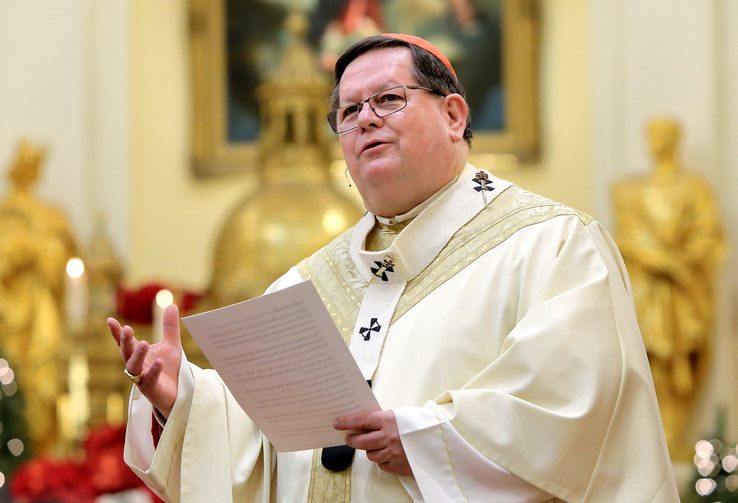 Cardinal Gerald Lacroix of Quebec is pictured in a file photo at the Cathedral-Basilica of Notre-Dame de Quebec. (CNS photo/Philippe Vaillancourt, Presence)

QUEBEC CITY (CNS) — The Archdiocese of Quebec announced its intention to reorganize its parishes to focus on local missionary activities. This move comes as human and material resources continue to diminish.

At least 75% of the parishes will be affected by this change, in both urban and rural areas.

In a video, Cardinal Gerald Lacroix stressed that the church of Quebec was born out of mission. But, he said, it is now clear that the parish system that had a strong impact on French Canadian society is not sustainable and needs to evolve.

“We can no longer be satisfied with giving good pastoral services to the people who faithfully participate in our assemblies and movements,” said Cardinal Lacroix. “These people now represent a tiny part of the population entrusted to us.”

Cardinal Gerald Lacroix: It is now clear that the parish system that had a strong impact on French Canadian society is not sustainable and needs to evolve.

Quebec Auxiliary Bishop Marc Pelchat added that in recent years, the life of the parishes has relied on teams that have carried out “almost everything” of the daily functioning, often focusing on “expected services.”

“We must now reorient our pastoral teams toward a more intensely missionary activity, turned toward the people and groups that we reach too little,” said Bishop Pelchat.

This call to go beyond the usual frameworks aims at “freeing energies” to better reach out to the population that is currently not reached by the church’s message.

Priests, deacons and laypeople must “envisage working to spread the Gospel message outside our usual frameworks,” with new means, in new territories, Cardinal Lacroix said.

Priests, deacons and laypeople must “envisage working to spread the Gospel message outside our usual frameworks,” with new means, in new territories, Cardinal Lacroix said.

Over the past decade, the number of parishes in the Archdiocese of Quebec decreased from 200 to 38. These 38 parishes were then organized into 29 large “pastoral units.”

“For a long time now, the resources available have not allowed us to appoint pastors and other pastoral collaborators in sufficient numbers to meet the needs of all the communities,” confirmed Marie Chrétien, diocesan pastoral coordinator. “We now lack the resources to assign a pastoral team to each of these large units.”

From now on, the diocese will constitute expanded pastoral units, which will be articulated around new teams that will collaborate with people involved in the various areas.

Cardinal Lacroix raised the possibility that eucharistic celebrations could eventually be centered around “a few central churches.”

These changes will be made for the pastoral year that begins Aug. 1. In the meantime, the diocese intends to continue consultations to “clarify the roles and responsibilities of each one” and to determine according to which new financial and administrative agreements the parishes will continue to operate.

Cardinal Lacroix said he believes it will be necessary to get used to a “new face of the organization of the church.” He called on employees to welcome these changes and invited them to see how they can collaborate.

He also announced other changes anticipated for the church of Quebec. He raised the possibility that eucharistic celebrations could eventually be centered around “a few central churches.”

“The use of our places of worship and other buildings will have to be reevaluated, for the financial weight of these has increased and considerably restricts our ability to fulfill our essential mission,” he said. “The number of eucharistic celebrations will also have to be reviewed, because priests, far fewer in number than before, cannot limit themselves to multiplying sacramental celebrations while neglecting other forms of presence.”

He said he also expected the diocese will have fewer paid personnel and more volunteers.

[Read this next: Does it matter if a charity calls itself ‘Catholic’? The church in Montreal faces a question at the heart of its mission]

Philippe Vaillancourt - Catholic News Service
Provide feedback on this article
Join the conversation: Login or create an account
Before you can comment, you need to update your profile to include your first and last name, as required in our comments policy. Then reload this page and you'll be set up for commenting. Update your profile