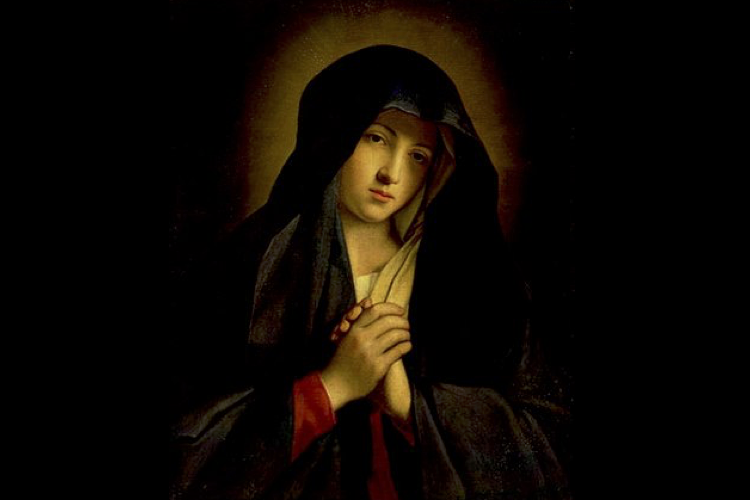 A Reflection for the Fourth Tuesday of Advent

A Reading from the Gospel of Luke

“My soul proclaims the greatness of the Lord;
my spirit rejoices in God my savior.

For he has looked upon his handmaid’s lowliness;
behold, from now on will all ages call me blessed.

The Mighty One has done great things for me,
and holy is his name.

His mercy is from age to age
to those who fear him.

He has shown might with his arm,
dispersed the arrogant of mind and heart.

He has thrown down the rulers from their thrones
but lifted up the lowly.

The hungry he has filled with good things;
the rich he has sent away empty.

He has helped Israel his servant,
remembering his mercy,
according to his promise to our fathers,
to Abraham and to his descendants forever.”

Mary remained with her about three months and then returned to her home.

Mary reminds us that God’s heart is close to those the world might least expect. While the powerful seem to thrive on earth, Mary has insistent faith that God has a preference for the poor and the weary. And her prayer does not simply suggest that suffering will make for an eventual reward in heaven; her strong language about casting down the powerful suggests that God’s power will bring justice to the oppressed not just after death but also in the here and now.

Mary reminds us that God’s heart is close to those the world might least expect.

After this challenging year, it is natural that our faith might be shaken. We have lost loved ones, lost livelihoods, seen our brothers and sisters hurt and oppressed. Through it all, we have been isolated, unable to rely on our support systems in the same way we would otherwise.

It is Mary, though, who reminds us that God’s holiness makes itself manifest in justice. She speaks as a poor young girl who has the responsibility of the whole world on her shoulders, whose reputation has been compromised, who can find no one else who can relate to her situation. But Mary knows the greatness that is on the horizon for her. As she sees it, God has done it before. She reminds us that, for us, he will do it again.

How can I call to mind the good that God has already done in my life and the lives of others?

Do I recognize God as a disrupter, a reformer, a revolutionary—all for the sake of justice?

@MollyKCahill
Provide feedback on this article
Join the conversation: Login or create an account
Before you can comment, you need to update your profile to include your first and last name, as required in our comments policy. Then reload this page and you'll be set up for commenting. Update your profile