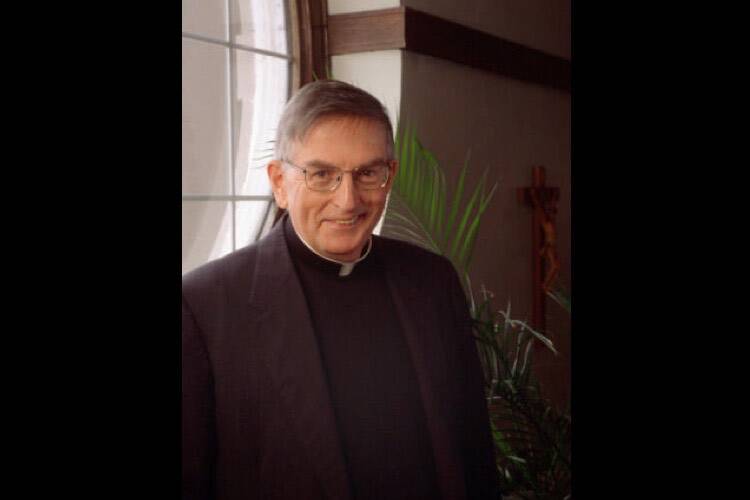 A great Jesuit priest, dear friend and valued mentor has died: William A. Barry, S.J. Bill was 90 years old when he died at the Jesuit infirmary at Campion Center in Weston, Mass., on Saturday. He was a towering figure in Catholic spiritual circles, a pioneer in the practice of spiritual direction and a revered spiritual master. What I, and the Catholic Church, owe him is beyond measure. And he has been with me, in a sense, from the moment I entered the Jesuits.

When I was a first-year novice in the old New England Province in 1988, I had no idea how to pray. What was supposed to happen when I prayed? How did you start?

At the peak of my frustration, a week or two after I entered, the assistant novice director handed me a slim book with the title God and You: Prayer as a Personal Relationship. No single book has influenced my spiritual life so profoundly. It is not a stretch to say that it changed my life.

In his long career as a Jesuit priest, Bill Barry was many things, all demonstrating the high regard in which he was held in the Society of Jesus and his native New England Province: assistant novice director, formation director, provincial and, finally, tertian director (in charge of the final stage of Jesuit formation).

But it was as a spiritual director, a teacher of spiritual direction and an author on Christian spirituality that Bill was best known. He was the editor of Human Development magazine, which focused on the intersection between spirituality and psychology, and one of the founders and directors of the Center for Religious Development in Cambridge, Mass., which for many years trained dozens of spiritual directors in the Ignatian way. His landmark book, co-authored with William J. Connolly, S.J., The Practice of Spiritual Direction, is a classic in the genre. It is fair to say that Bill Barry is one of the main reasons for the growth in spiritual direction, the popularity of Ignatian spirituality and the spread of individually directed retreats in the wake of the Second Vatican Council.

His many books, however, were not all written for spiritual directors per se, but for a general audience. Their titles telegraph the main theme of his writings: God desires a relationship with you: God’s Passionate Desire, A Friendship Like No Other, Letting God Come Close and Seek My Face.

His friends sometimes teased Bill that he wrote the same book over and over, but that was not true at all. Each book took a different approach to the topic (and some were more focused on topics like the Spiritual Exercises and Ignatian spirituality), and in later years, he filled them more with wonderful stories taken from the lives of his “directees” (anonymous, of course), his Jesuit brothers and his own life. His background as a trained psychologist also informed his books deeply. Bill’s last book, which I had the chance to read a few months ago, will be published next year by Loyola Press, his longtime publisher. The day before Bill died, Loyola settled on the title: God’s Great Story for the World—and You.

I find all of Bill’s writing inviting, accessible and frequently brilliant, and I cannot count the number of people to whom I have recommended God and You. It is the first book I recommend to any newcomer to prayer.

I cannot count the number of people to whom I have recommended God and You. It is the first book I recommend to any newcomer to prayer.

Bill was also a great mentor to me, not simply as my superior but also as an experienced author, reviewing nearly all my books and offering wise advice. I treasured his insights, edits and corrections. And I learned a lot from Bill about how to write about prayer.

His Jesuit brothers will remember that Bill, many decades ago, had a reputation for being rather gruff. In later decades, for a number of reasons, that changed dramatically, and he became as warm and kind and gentle as his prose had always been.

And things were not always smooth between us! When I was a young Jesuit, during my “regency” in Kenya, I had fallen in love in a serious way. Consequently, Bill, as the provincial of the New England Province, delayed my moving on to theology studies, the next stage of formation, for a year. I was furious with the delay and almost left the Jesuits as a result, but eventually, I accepted his decision under obedience. (To put this in perspective, nearly any provincial would have asked for a delay in this situation as well.)

Decades later, at a Jesuit meeting, I said to Bill, rather sheepishly: “You know, I have to admit: You were right about that all those years ago. I wasn’t ready at all.”

I expected Bill to say, “Yes, in hindsight now, I can see that this was indeed a wise move.” Instead, he laughed and said, “I knew I was right back then!” We both had a good laugh.

I was so moved to think of him finally encountering, face to face, the God that he helped others meet in prayer for so many years.

And his mission for me in that intervening year: America magazine, which is where I’ve worked ever since ordination. So you could say that if it weren’t for Bill, you would not be reading these lines.

Over the past few years, Bill would send me the most generous and thoughtful emails, supporting me in my ministry, complimenting me on a book or an article or just saying that he was praying for me. I treasured his friendship and his warm advice. Last year, he reviewed my latest book, Learning to Pray, correcting and amplifying things here and there.

That new book is dedicated to Bill, and I am grateful that I was able to tell him that before he died. It reads: “For William A. Barry, SJ, whose books, and life, have helped countless people to pray.”

Last week, when word came that Bill was failing, I was so moved to think of him finally encountering, face to face, the God that he helped others meet in prayer for so many years.

Rest in peace, Bill, with the God who loved you into being, who accompanied you in prayer and who always desired your friendship.