George Floyd died crying out to his mother. So did Jesus. 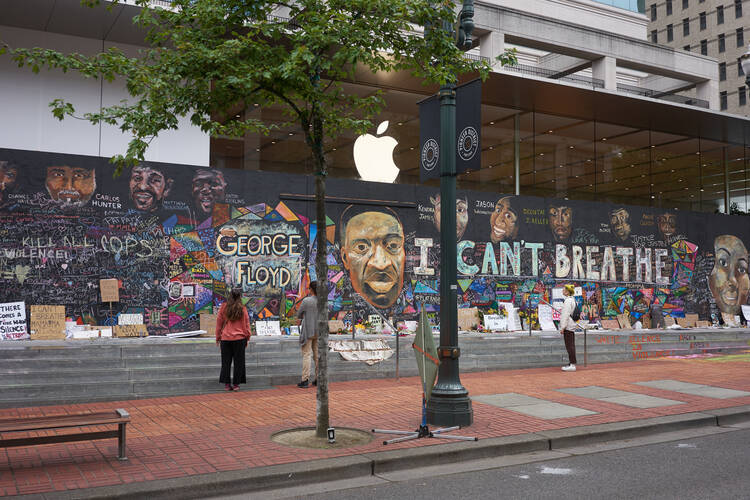 Portland, OR, USA - Jun 12, 2020: Passers-by stop and take a look at the boarded-up Apple Store in downtown Portland's Pioneer Place, which has become unofficial canvases for peaceful protest. Artists have also joined to promote peace over violence.

A Reflection for the Fourth Sunday of Advent

He was only 2 years old when his parents separated. His mother, Cissy, then moved her four children into Cuney Homes, Houston public housing. Standing at about six feet by adolescence, sports appeared as the young man’s path to prosperity. Playing power forward, he co-captained his high school basketball team. He played tight end for the football team that won the 1992 Texas State Championship.

The first of his siblings to go to college, he received a football scholarship from South Florida Community College and went on to play basketball at Texas A&M. Miss Cissy, as he called her, had good reason to be proud of the young man, whom his family and friends called “the gentle giant.” He considered his mother the center of his world. Her name was tattooed on his torso.

He was recently unemployed at the time of his death, having lost his job as a bouncer at a bar and grill that had been shuttered due to Covid-19 restrictions. Passing a counterfeit $20 bill brought him into contact with four Minneapolis policemen and led to his death by asphyxiation. Officer Derek Chauvin’s knee was on his neck for eight minutes, far longer than department regulations permitted. Sixteen times George Floyd gasped that he could not breathe. He also called out “Momma” and “Momma, I’m through.”

Anyone who has read close accounts of battles knows that young men often die calling upon their mothers. Truth be told, they are calling upon God.

Miss Cissy had died two years earlier, but anyone who has read close accounts of battles knows that young men often die calling upon their mothers. Truth be told, they are calling upon God. As their worlds close in upon them, they cry out the name of the presence that first opened those worlds to them: the smile, the embrace, the voice they learned to call “momma.” It is not sacramental theology to say that mothers act in the person of God. It is basic anthropology.

Each Advent, the church cries out for the final coming of Christ. And every year, she surrenders those calls to ponder the Christ who came at Christmas, perhaps because she realizes that her own work in receiving him is not yet complete. And so, each Fourth Sunday of Advent, she ponders the woman who brought forth the savior.

Mary bore the Christ-child, nursed his flesh with her own. But, like other mothers, she continued to be the dwelling place of her son. Why? Because she was not only his shelter and support; she was the source of what would become his world.

Yes, at first good St. Joseph was there, protecting them both. He was all that a father and a spouse should be. But the very law of our humanity demands that we emerge from others, not only physically but psychologically as well. The woman is the dwelling who makes man possible, who shelters and sups him into the world.

The basic humanity of each of us comes forth from a woman.

The basic humanity of each of us comes forth from a woman. In the ancient world, to name someone was to reveal their essence, their deep identity. It is Mary who names her son Yeshua, Hebrew for “salvation.”

Behold, you will conceive in your womb and bear a son,
and you shall name him Jesus (Lk 1:31).

Christ and his mother are the initiative of God, not of man. We do not build a dwelling that God then deigns to enter.

When God determines to dwell with us, the genesis of this new creation lies deep within the humanity of the virgin mother, the sealed garden, the place from which Christ could come forth to claim humanity, having never surrendered it. “Lo! o’er ancient forms departing/ Newer rites of grace prevail.”

The Holy Spirit will come upon you,
and the power of the Most High will overshadow you.

Therefore the child to be born
will be called holy, the Son of God (Lk 1:35).

Remember that the Scriptures are terse, stylized testimonies of faith. They contain great truths about the nature of the church and the meaning of discipleship. They also address each of us in the depths of our own person. If we pray over them, they speak directly to each of us, telling us who we are meant to be. The abbot Blessed Isaac of Stella wrote:

“I can’t breathe.” “Momma.” “I can’t breathe.” “Momma, I’m through.” From the cross, Christ calls out to his mother. He asks the church to shelter her and her to cradle the church. She becomes the exemplar of the church, the new Ark of the Covenant, God’s dwelling among us. But beneath all of this is the misty and fertile ground of truth, that a very human Christ dies calling out to his mother, calling out to us.

— Advent 2020: Reflections, podcasts and more
— Read: Pope Francis on how prayer reveals our common humanity
— Why does God allow suffering? A meditation