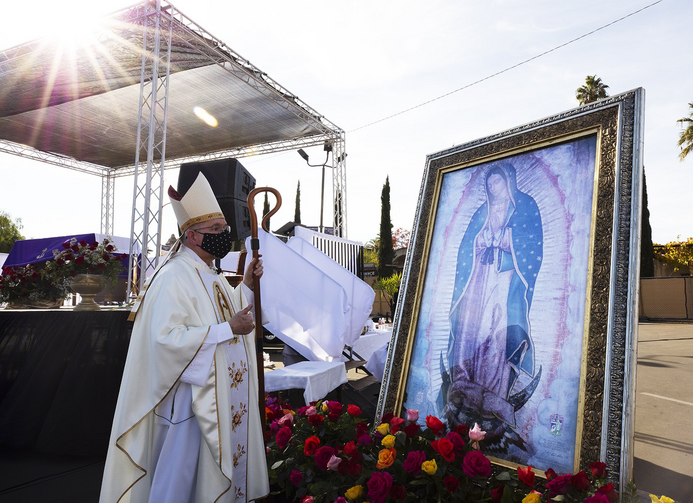 The doctors told her it was over. Maria Aranda’s battle with cancer had come to an end, and there was no reason for her to receive the final two treatments of chemotherapy. She would do well to go home and get her affairs in order.

Ms. Aranda heard the news on the anniversary of her mother’s death. She took this as a sign not to give up. She prayed to God and asked for the intercession of Our Lady of Guadalupe.

“I asked God for the opportunity to continue living, and I told him I would serve him with my life,” she said. “I knew God would do something for me.”

That was six years ago. Ms. Aranda attributes her healing to the intercession of la Guadalupana, the Marian apparition to St. Juan Diego Cuauhtlatoatzin in 1531 in modern-day Mexico City. The Blessed Mother first appeared to Juan Diego on the hill of Tepeyac on Dec. 9 and asked that a church be built there in her honor.

It has always been a communal celebration, with processions, mariachi and dancing. But this year, for example, everyone stayed in their cars during the drastically scaled-down Guadalupe procession in Los Angeles.

Juan Diego, a member of the indigenous Chichimeca people, relayed the message to the local bishop. But the bishop did not believe him. To convince the bishop, days later, Mary asked Juan Diego to retrieve roses from the top of the hill. They were not in season, but Juan Diego nevertheless found roses. The Blessed Mother arranged the roses in Juan Diego’s tilma, or cloak.

Juan Diego went again to the bishop, this time with his cloak full of roses. When the roses fell from his cloak, they revealed the miraculous image of Our Lady of Guadalupe. In awe, the bishop was convinced. A church was built on Tepeyac. Christianity has never been the same.

The image left on Juan Diego’s tilma endures despite being exposed to the elements for centuries. It even survived a blast from a bomb in 1921. The Basilica of Our Lady of Guadalupe, which attracts 20 million visitors each year, is the most popular Catholic pilgrimage site in the world.

The tilma depicts la Virgen Mestiza, a Mary of mixed race for all people. Indigenous symbolism within the image communicates Our Lady of Guadalupe’s message to the Americas and is believed to have inspired millions to convert to Christianity. St. John Paul II called Our Lady of Guadalupe “a model of perfectly inculturated evangelization.”

As Ms. Aranda spoke over the phone, she was working on her home altar dedicated to Our Lady of Guadalupe in Whittier, Calif. She has been leading a virtual rosary prayer group each day since Oct. 28. Every year, many who are devoted to la Guadalupana will pray 46 rosaries leading up to the celebration of her feast day, Dec. 12. The number of rosaries corresponds with the number of stars on her mantle.

Before the pandemic, Ms. Aranda had formed a group dedicated to Our Lady of Guadalupe that prayed together every Tuesday, visiting different families each week. The group now meets virtually.

“We cannot be detained in our evangelization efforts,” Ms. Aranda said.

Celebrations for Our Lady of Guadalupe will look different this year. It has always been a communal celebration, with processions, mariachi and dancing. But this year, for example, everyone stayed in their cars during the drastically scaled-down Guadalupe procession in Los Angeles. California enacted strict measures on Dec. 6, including a ban on public and private gatherings, to curb the spread of Covid-19.

“I have that excitement that comes every year as the date approaches, but I also have a sadness that we will not be able to celebrate together.”

“This year, everything is different,” Miguel Cuevas said. “I have that excitement that comes every year as the date approaches, but I also have a sadness that we will not be able to celebrate together.”

Mr. Cuevas said he always prays to God and Jesus first. But then he asks for the intercession of la Virgen. “We always have her image there, next to the front door,” he said, and he always carries a small image of Our Lady of Guadalupe with him. Her image is so sacred to him that he describes it like a person.

Years ago, Mr. Cuevas recalled fondly, he was charged with welcoming an image sent from the Basilica of Our Lady of Guadalupe at the Los Angeles airport. He described the image as an exact replica, in detail and size, of the original apparition.

Every year, this image, along with an image of St. Juan Diego, are brought to parishes throughout the Los Angeles area. In years past, Mr. Cuevas would drive the images to more than 40 parishes starting in October. It is common for hundreds to gather at each parish when the image arrives, he said.

On one such trip, one of his 20 grandchildren accompanied him. “It’s really important to transport this image,” he remembers his grandson saying to him. “It’s so good we’re doing this, abuelito.”

“My faith tells me that yes, this was because of her intercession,” Mr. Cuevas said. “My faith has always told me that it was my mother, my protectress.”

Like Ms. Aranda, Mr. Cuevas believes in the healing and protective power of Our Lady of Guadalupe. He has been involved in three car accidents that resulted in trips to the hospital. In two cases, he had to be pried out of his vehicle by the paramedics. In the other, he was about to put something into his trunk when he heard approaching police sirens in pursuit of another vehicle. He tried to avoid the oncoming car, pressing his body against his own car. But when the fleeing car struck him, Mr. Cuevas was launched many feet into the air and fell flat on the pavement.

“My faith tells me that yes, this was because of her intercession,” Mr. Cuevas said. “My faith has always told me that it was my mother, my protectress.”

His devotion began nearly 70 years ago when, at 11, his mother brought him to visit Juan Diego’s tilma on the hill of Tepeyac. Bertha Hernández also learned the devotion at an early age when her mother and grandmother would bring her to church for rosaries and processions in honor of Our Lady of Guadalupe. She, in turn, has handed the devotion down to her five children.

“In the morning, I tell my children to give thanks to God for waking up that day,” she said. “Pray an Our Father for all those people who have Covid. Don’t forget. God is great and he helps us.”

“You’re there in gratitude to God for all that he has given you. It doesn’t matter how you dance. What matters is what you have in your heart.”

In Los Angeles, Ms. Hernández coordinates a group of matachines, traditional Mexican dancers who perform for Our Lady of Guadalupe. “The dance is a way of prayer, to give thanks to God and to ask help from God and the Blessed Virgin. It’s a way to grow closer to God,” she said.

“When you’re dancing, you forget about everything around you, and you focus on God and la Virgen,” Ms. Hernandez said. “You’re there in gratitude to God for all that he has given you. It doesn’t matter how you dance. What matters is what you have in your heart.”

Groups of matachines dance at many churches and in processions during the days leading up to Dec. 12. But this year, matachines are “mostly prohibited,” Ms. Hernández said. Her group will dance in a church, but it will only be for a short time and it will be a small group.

“It’s hard to describe the feeling,” she said. “You get depressed because you cannot celebrate, but it’s not just this. There are a lot of day-to-day things that you can’t do because of Covid. We would want to do what we usually do this year and ask la Virgen for help.”

But out of caution, they will not, Ms. Hernández said. There is always a fear of contracting Covid-19 and giving it to others. “You feel powerless,” she said.

But Ms. Hernández believes Our Lady of Guadalupe can intercede for the world during the pandemic. She believes the Blessed Mother has interceded for her personally in the past.

In 2014, as she and her son took a walk at a local park, a large branch fell from a tree and struck them. They were trapped underneath it, and it was doubtful that she would walk again. Today, though, she not only walks but dances.

“To me, these are miracles, wonders of God,” Ms. Hernández said. “Our Lady of Guadalupe is always with us.”

At another time, her husband was in a coma and the doctors gave him a 10 percent chance of survival. She asked for Our Lady of Guadalupe’s intercession. Two days later, he woke up and the doctors could not explain it, Ms. Hernández said. She also credits her husband’s return to the faith to his participation in the Guadalupe dance group.

This year, her daughter contracted Covid and, while she is young, she had a severe case. She had trouble breathing. But she, too, was healed.

“To me, these are miracles, wonders of God,” she said. “Our Lady of Guadalupe is always with us.”

During her apparitions to Juan Diego, Our Lady of Guadalupe is believed to have consoled Juan Diego about his uncle, who was gravely ill.

“Do not fear this sickness of your uncle or any other sickness, nor anything that is sharp or hurtful,” she said. “Am I not here, I, who am your mother? Are you not under my shadow and protection? Am I not the source of your joy? Are you not in the hollow of my mantle, in the crossing of my arms? Do you need anything more? Let nothing else worry you, disturb you.”

Those words still echo in the hearts of those devoted to Our Lady of Guadalupe.

—Mexico’s Guadalupe celebrations move online to prevent a potential Covid-19 catastrophe
—2020 felt like a yearlong Advent. But we can still make this season of waiting special—pandemic or not.
—The Supreme Court ruled you have the right to worship in person. That doesn’t mean you should.