Pope Francis’ strength is in surprises 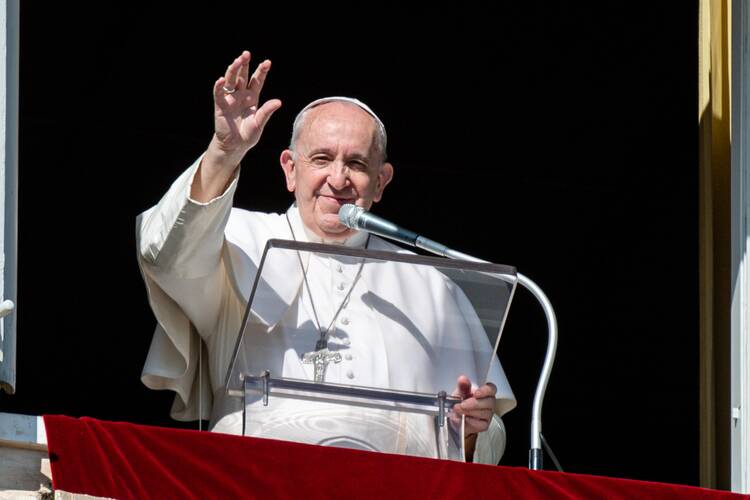 Pope Francis greets the crowd as he leads the Angelus from the window of his studio overlooking St. Peter's Square at the Vatican Nov. 8, 2020.

A Reflection for the 33rd Sunday in Ordinary Time

Pope Francis was only newly elected when he determined a fundamental priority of his pontificate: receiving Christ in the stranger. We live in a time of unprecedented global migration, most of which is forced upon refugees who flee violence, oppression and poverty. Yes, nation-states require borders, and we are far from outgrowing nationalism. But refugees require reverence. We cannot tolerate policies that treat people simply as problems.

Like any other leader, each pope possesses personal strengths and weaknesses. One of Francis’ strengths is his willingness to surprise, to take the unexpected path. In The Outsider: Pope Francis and His Battle to Reform the Church (2020), Christopher Lamb, the Vatican correspondent for The Tablet, fills in the touching and telling background to the Holy Father’s first public trip as pope, which was to receive refugees at the port of Lampedusa in southern Italy.

In contrast to politicians who stoke fear about migrants to gain power, Francis’s policy can be summed up in one line from Scripture:

The outsider pope had decided to associate his papacy with the “outsiders” seeking to enter Europe.

Francis initially faced some resistance from Vatican officials with his plan to visit Lampedusa. Papal trips, inside and outside of Italy, require planning and a good deal of organizing and liaising with civil officials and local bishops. Some in the Curia felt there wasn’t sufficient time to organize a trip given that the pope was due to fly to Rio de Janeiro for World Youth Day, July 22-29, 2013.

But he was insistent. Francis called Alitalia to book himself a seat on a flight to Lampedusa as “Jorge Mario Bergoglio.” An official from Alitalia, the airline that flies the pope when he goes abroad, later rang the Vatican to say they had someone claiming to be the pope trying to book himself onto a flight. Given that, as a head of state, the pope cannot just book a regular airline ticket, the Vatican then agreed to arrange an official visit, and the trip to Lampedusa occurred on July 8, 2013.

We have a pope who is hard to pin down. We should be prepared to be surprised.

We have all heard the expression: “Expect the unexpected.” The Christian version is “stay awake for the surprise.” St. Paul wrote to the church in Thessalonica, warning them about a “sudden disaster,” saying that it was coming “like a thief in the night.” He urged them “to stay awake.”

In his wonderful contribution to the Catholic Commentary on Sacred Scripture series (2019), Nathan Eubanks points out that each of these expressions is found on the lips of Jesus in the synoptic Gospels. Why is that significant? It tells us that “stay awake for the surprise” is not simply a policy of this pontificate—it has always been fundamental to the Christian message.

To be Christian is to expect the unexpected, to allow the Lord to lead us where we would not go.

Be sure of this: if the master of the house had known the hour of night when the thief was coming, he would have stayed awake and not let his house be broken into. So too, you also must be prepared, for at an hour you do not expect, the Son of Man will come.

In the Gospel of Luke, there is talk of a “sudden disaster”:

Beware that your hearts do not become drowsy from carousing and drunkenness and the anxieties of daily life, and that day [fall upon you suddenly as] a trap. For that day will assault everyone who lives on the face of the earth. Be vigilant at all times and pray that you have the strength to escape the tribulations that are imminent and to stand before the Son of Man.

And, just like St. Paul in his letter to the Thessalonians, St. Mark speaks of setting sleep aside:

Watch, therefore; you do not know when the lord of the house is coming, whether in the evening, or at midnight, or at cockcrow, or in the morning. May he not come suddenly and find you sleeping. [See also the parable of the faithful or unfaithful slave: Mt 24:45-51; Lk 12:42-46.]

“Stay awake for the surprise” is both Christ’s prediction of what will come and his pointer for Christian discipleship. We will be just as surprised by Christ’s advent at the end of history as we are with his daily arrival—but only if we stay awake for both, if we remain spiritually alert. To be Christian is to expect the unexpected, to allow the Lord to lead us where we would not go.

Taken as a whole, the message of the New Testament is that God is ever new, a thief in the night; that God’s activity is always unprecedented, a sudden disaster; and that everything depends upon our being ready to be surprised, our staying awake.

We have a pope who is hard to pin down. We should be prepared to be surprised. That is, though, a constant teaching of the church that can be traced to its very beginning.