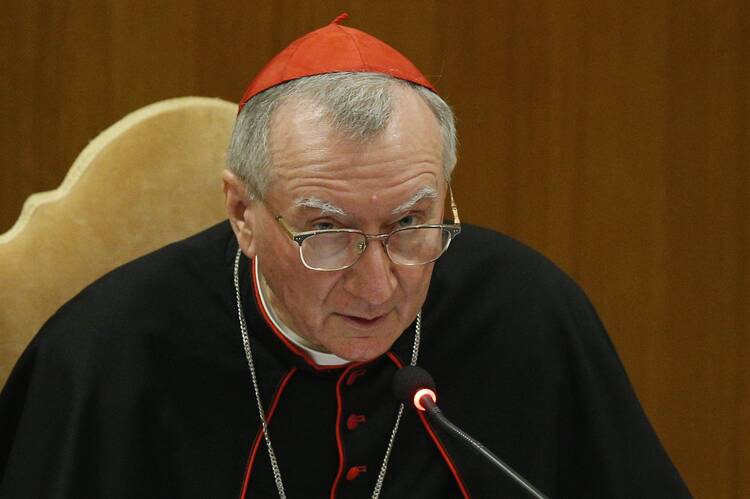 Cardinal Pietro Parolin, Vatican secretary of state, speaks at a press conference for the release of Pope Francis' new encyclical, "Fratelli Tutti, on Fraternity and Social Friendship," in the synod hall at the Vatican Oct. 4, 2020. (CNS photo/Paul Haring)

Pope Francis has taken another decision of critical importance in the ongoing reform of Vatican finances. He has taken away from the Secretariat of State the management and administration of all financial funds and real estate assets and transferred this task to the office of the Roman Curia that deals with the Administration of the Patrimony of the Apostolic See (A.P.S.A.) and serves as the treasury and central bank of Vatican City and the Holy See.

The Secretariat of State is the central oversight and controlling department (dicastery) of the Roman Curia and works directly with the pope. It has three sections: The first deals with the general affairs of the church, the second handles relations with states, and the third is responsible for the diplomatic personnel of the Holy See. The Secretariat is headed by the cardinal secretary, currently Pietro Parolin.

Pope Francis has taken away from the Secretariat of State the management and administration of all financial funds and real estate assets.

Soon after his election in 2013, Pope Francis set about responding to the wishes of the cardinals in the pre-conclave assemblies to clean up Vatican finances. He began the complicated and difficult task of reforming all Vatican finances, and he established the Secretariat for the Economy in 2014 for this purpose. Subsequently, he introduced wide-ranging legislation, removed personnel as malpractice or scandals emerged, and asked Vatican prosecutors to intervene when necessary and “follow the evidence wherever it leads.”

As part of that ongoing effort at reform, he took this new decision, also in the light of the recent scandal related to the purchase of the Sloane Avenue property in central London that was conducted by the Secretariat of State and has led not only to loss of money but also to embezzlement, corruption, blackmail, the resignation of a cardinal, the removal of two persons from the Holy See’s diplomatic corps and a judicial investigation that is expected to lead to prosecution. The scandal has also damaged the image and reputation of the Vatican, impacted negatively on its evangelizing mission, and caused concern among the faithful who give money to the pope’s charity, which also is managed by the Secretariat of State.

The Vatican announced the pope’s decision today when it published a letter that Pope Francis had written to Cardinal Pietro Parolin, the Secretary of State, on Aug. 25, informing him of this decision and requesting that he arrange a meeting with relevant Vatican personnel dealing with finances to make it operative.

The Vatican announced the pope’s decision today when it published a letter that Pope Francis had written to Cardinal Pietro Parolin, the Secretary of State, on Aug. 25.

Francis began the letter by explaining that in the process of reforming the Roman Curia he had “reflected and prayed” on the most appropriate way to provide a better organization for the Vatican’s economic and financial activities so that they become “more evangelical, transparent and efficient.”

As part of this reform, he said, “it is of the utmost importance to define in a clear manner the mission of each entity [of the Vatican and the Holy See] in the economic and financial area, and the corresponding manner for carrying out the administration and control” so as to avoid overlap, duplications and fragmentation “that does damage to the proper functioning of the Roman Curia.”

He underlined the fact that “the Secretariat of State is without any shadow of doubt the dicastery that most closely and directly sustains the activity of the Holy Father in his mission, and represents an essential point of reference for the life of the Curia and the dicasteries that are part of it.” At the same time, he said, “it is neither necessary nor opportune” that the Secretariat “should carry out all the functions that are attributed to other dicasteries.” For this reason, the pope said, “the principle of subsidiarity” should prevail in the Vatican also “in financial and economic matters.”

The pope said “the principle of subsidiarity” should prevail in the Vatican also “in financial and economic matters.”

He decreed that the Secretariat of State transfer to the A.P.S.A. “the management and administration of all the financial funds and real estate assets.” He instructed that the Vatican “exit as soon as possible” from the London investments and the Centurion Global Fund that has for many years managed Vatican investments, “or at least dispose of them in a way that eliminates all reputational risks,” meaning to the reputation of the Holy See. The Centurion fund charged the Vatican for its services, and also incurred losses in 2018. Its value to the Holy See is questionable.

He asked that “all the funds that have hitherto been administered by the Secretariat of State be incorporated into the consolidated balance sheet of the Holy See.” This is significant, because up to now they were not included in that balance sheet and were for the most part unknown to the public. Cardinal George Pell, when he was prefect of the Secretariat for the Economy, was blocked by Archbishop (now cardinal) Angelo Becciu—then Substitute, or chief of staff—when he tried to have these funds audited by an outside firm.

Pope Francis also specified that “in economic and financial matters,” the Secretariat of State should operate with “an approved budget” like all other Vatican departments and offices, except for the funds for “reserved matters” that are then subject to approval and control by a commission set up earlier to deal with such issues. This would seem to suggest, though it has yet to be clarified, that the Secretariat of State would no longer control the funding for such entities as the nunciatures and other Vatican diplomatic missions.

Pope Francis specified that “in economic and financial matters,” the Secretariat of State should operate with “an approved budget” like all other Vatican departments.

He decided that the Secretariat for the Economy, now headed by a Spanish Jesuit, Father Juan Antonio Guerrero, should “exercise control and vigilance over financial and administrative matters in all the entities of the Roman Curia, as well as those linked to it or those that refer to it.”

Pope Francis decreed that “in economic and financial matters,” the Secretariat of State “will no longer have responsibility of vigilance and control of any entity of the Holy See, or of those linked to it or those that refer to it.”

He concluded that since the Secretariat of State will no longer have to administer or manage financial or other assets, it should redefine the role of its administrative office and, indeed, evaluate whether it needs to exist. It is worth mentioning that this is the office that handled the London property,\ and responded directly to Archbishop Becciu, and whose then employees are under a judicial investigation that could end in a court case.

That meeting, presided over by Pope Francis, was held yesterday, Nov. 4, to implement the pope’s decision for organizing the transfer of the management and administration of the above-mentioned funds, and for handing over the control of these same funds to the Secretariat of the Economy. The total transfer is to be completed within three months.