I voted for Donald Trump in 2016. This is my message for his Catholic supporters today. 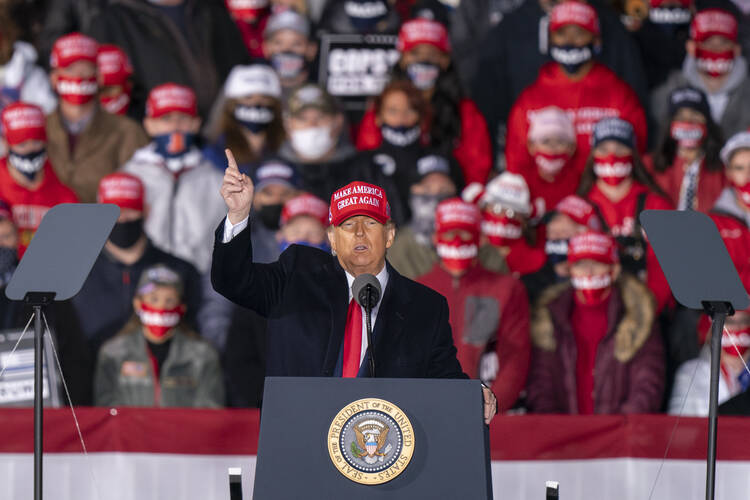 I have held this a secret from many for four years: In 2016, I voted for Donald J. Trump. While he was not my first choice, I saw him as the lesser of two evils. I was aware of the danger that Mr. Trump posed to the nation from the very beginning, but like too many Catholics, I was led to believe that Mr. Trump was “pro-life” and that Catholics must vote for the anti-abortion candidate.

When the infamous “Access Hollywood” tape was released just weeks before the election, I asked my parents not to mail in the absentee ballot I had filled out. Unfortunately, it was too late. My vote for Mr. Trump had been cast.

But by the time Nov. 8 rolled around, I had let go of my previous disdain for Mr. Trump’s chauvinism and lack of morality and instead rejoiced in the fact that he beat out Hillary Clinton and would be a pro-life president.

I have held this a secret from many for four years: In 2016, I voted for Donald J. Trump.

At the time, I was a first-year student at the University of Virginia and canvassing for a Republican House candidate. I went to class as usual and then went to the polls and held up signs. On Tuesdays, I had a class entitled “Religion and Politics in the 2016 Election.” During class on Election Day, I predicted a Trump victory because of the “secret Trump voters” that have since become infamous in polling.

I was, to some extent, a secret Trump voter. I didn’t agree with his stances on immigration, I didn’t approve of his treatment of women, and quite frankly I didn’t think he was qualified. I was not a MAGA kid. But I knew two things: I really didn’t like Hillary Clinton, and Donald Trump was against abortion. And that was enough for me. If a pollster had asked who I was voting for, I probably would have been a bit shy about it as well.

On election night, I can remember the moment I knew Mr. Trump would win. I celebrated with the fellow Republicans with whom I was watching the returns, and we were booed by the shocked and dismayed Democrats in the room. I went back to my dorm, chanting “Trump” with some Republican hallmates. Looking back, I was a bit uncharitable toward my Democratic hallmates.

The next two days, I woke up, put on one of my two Republican-branded shirts and walked to class, receiving countless dirty looks along the way. I thought nothing of it. I was being a sore winner, and they were being sore losers. I had friends who struggled to get out of bed on Nov. 9; and quite frankly, I couldn’t understand it. In fact, I even posted on Facebook about it, saying that we should all join together as a country and be united. While my Republican family and friends were quick to like and support this post, some other people were less than charitable. Again I could not understand why. I thought I was being “bipartisan.” I thought I was being “American.” Because that is what Americans do: We accept differences and strive to make the country better than when we found it.

When Trump said “Make America Great Again,” I thought of a booming economy and ending abortion, not of a return to a time when members of marginalized communities were denied their rights.

Today, I understand that the women who were upset, the Black people, Indigenous people and people of color who were upset and the L.G.B.T. community members who were upset knew a different world than I did. When Mr. Trump said “Make America Great Again,” I thought of a booming economy and ending abortion, not of a return to a time when members of marginalized communities were denied their rights. In 2016 I did not understand how the world worked for people who didn’t look like me. I had a diverse group of friends composed of men and women of all different backgrounds, socioeconomic statuses, gender identities and sexualities, but I failed to see that the election of this man posed a very real threat to their sense of belonging in this country.

It was not until Jan. 27, 2017, that I began to understand the threat posed by the Trump administration. That was the day that President Trump enacted the first of many openly anti-life policies: the Muslim travel ban. Although I was not directly affected, I knew people who were. I saw the worry on people’s faces. Though that first attempt at a ban failed, in the years since, this administration has not only blocked immigration from six predominantly Muslim countries; it has also brought the number of refugees settled in the United States to a historic low and enforced a cruel and anti-Christian family separation policy for undocumented immigrants. And in the years since, I have worked to atone for my vote, which I now consider a sin.

I have educated myself on life and social justice issues beyond abortion, and I continue to do so. I continue to practice active allyship and work toward creating a more equitable society. This led me to campaign for Elizabeth Warren, one of the most progressive candidates for the Democratic ticket in the primaries, and I continue to work to elect Joe Biden and Kamala Harris to be the next president and vice president of the United States.

I would not have gotten to this place, however, without the remarkable love and compassion that I have been shown over the years. Many people knew that I voted for Donald Trump, and yet they did not shun me. I lost one friend because of my vote, but the rest showed me compassion—the kind of compassion I failed to show on Election Day. One professor of mine, who vehemently disagreed with me on politics yet continued to serve as a mentor, remarked that she admired my commitment to my beliefs. Another professor of mine and an America contributor, Nichole Flores, continued to have the hard conversations with me about what it means to be a “pro-life” Catholic Democrat. Once, while walking to class after the election and ranting about Donald Trump and Hillary Clinton, my best friend simply said, “Grant, I love you, but shut up, because we don’t agree.”

Yet as my views have developed through education as well as hard conversations with friends, spiritual leaders and professors, that same compassion has not been shown by my conservative friends and family. The same Republicans who “stood up for me” in the Facebook comments section now call me a disgrace and a traitor. While writing this essay will surely stoke the flames of those critics, I am proud to vote for progressive policies that I believe are most in line with my Catholic faith.

To my fellow Catholics who have also seen the fear and sadness in people’s eyes over the last four years: It doesn’t have to be this way.

To my fellow Catholics who have also seen the fear and sadness in people’s eyes over the last four years: It doesn’t have to be this way. I understand your positions and concerns because I lived them. As a Catholic convert and former Republican, I know how difficult it can be to change and learn about the other side; and God knows, I am far from done learning. What I do know is that there is no party that directly aligns with the teachings of the Catholic Church. So I implore you to listen to your conscience, to listen to the rhetoric of each candidate, to listen to the deafening silence of every person mourning the over 210,000 people dead from the coronavirus pandemic.

I know how important the sanctity of life is, and it is important to realize that the church’s teachings are far more complex than opposing abortion. Let’s turn to the faith that calls on us to show compassion to our neighbor, to our Black brothers and sisters being killed by the police, to the undocumented children yearning for the tender embrace of their mothers. At the end of the day, neither I nor a priest can or should tell you how to vote. But what I can tell you is that after more than a yearlong examination of conscience, I know which candidate best embodies my Catholic faith. 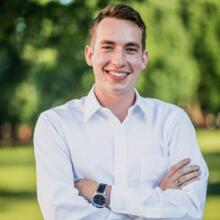 Grant Tabler is a graduate of the University of Virginia, a Catholic convert and an avid traveler. He is interested in Catholicism in the public sphere, issues of the common good and exploring cross-cultural values.