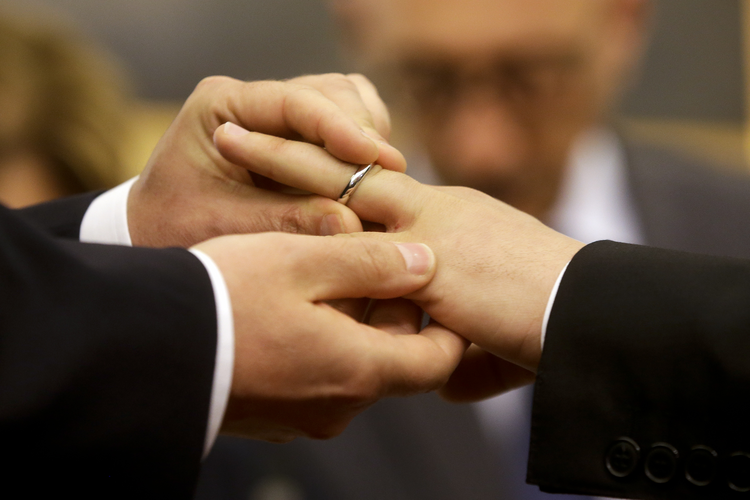 In this May 21, 2015 file photo, Mauro Cioffari, left, puts a wedding ring on his partner Davide Conti's finger as their civil union is being registered by a municipality officer during a ceremony in Rome's Campidoglio Capitol Hill. (AP Photo/Gregorio Borgia, file)

MEXICO CITY (AP) — A Mexican television broadcaster confirmed Thursday that Pope Francis' bombshell comments endorsing same-sex civil unions were made during a May 2019 interview that was never broadcast in its entirety.

Broadcaster Televisa said Thursday that the emphasis of its interview was on clergy sexual abuse and suggested it didn't consider the comments on civil unions as newsworthy because Francis had previously indicated support for them.

The Vatican, which had the full interview in its archives, apparently allowed the comments to be aired now in the documentary "Francesco," which premiered Wednesday.

A Mexican television broadcaster confirmed that Pope Francis’ bombshell comments endorsing same-sex civil unions were made during a May 2019 interview that was never broadcast in its entirety.

In the movie, which was shown at the Rome Film Festival, Francis said gays shouldn't be kicked out of families or made miserable. "What we have to have is a civil union law; that way they are legally covered," Francis said.

But a source in Mexico familiar with the interview said the original raw footage the Vatican provided to Televisa from the interview did not include the quote on civil unions. The source spoke on condition of anonymity because he was not authorized to speak to the press.

The Vatican did not respond to requests for comment.

When the pope consents to such interviews, the Vatican television unit films them and provides the full footage to the correspondent in question to edit and choose what to use. The Vatican takes that edit and the final product goes out simultaneously via the broadcaster and Vatican media.

The civil union comments caused a firestorm, thrilling progressives and alarming conservatives, given that official Vatican teaching prohibits any such endorsement of homosexual unions.

While serving as archbishop of Buenos Aires, Argentina, the then-Cardinal Jorge Mario Bergoglio endorsed extending civil union protections to gay couples as an alternative to moves by the country to approve same-sex marriage, which he firmly opposed. However, he had never come out publicly in favor of legal protections for civil unions as pope, and no pontiff before him had, either.

One of Francis' top communications advisers, the Rev. Antonio Spadaro, insisted Wednesday the pope's comments were old news, saying they were made during the May 2019 interview with Televisa.

"There's nothing new because it's a part of that interview," Spadaro told The Associated Press as he exited the premiere. "It seems strange that you don't remember."

But Televisa didn't air those comments when it broadcast the interview — nor did the Vatican when it put out its own recordings and a transcript of it.

A source in Mexico familiar with the interview said the original raw footage the Vatican provided to Televisa from the interview did not include the quote on civil unions.

The broadcaster, in a statement to AP, said it chose to highlight the pope's more "journalistically relevant" comments on sexual abuse in the comments it did air, which came just months after Francis hosted bishops from around the world for a child protection summit at the Vatican.

"The mention of unions between people of the same sex was something that the pope had already mentioned on other occasions prior to our interview in 2019," Televisa's statement said.

The Vatican frequently edits the pope in official transcripts and videos, especially when he speaks on sensitive issues. Yet a version of the full footage was apparently still available in the Vatican archives, which were opened to filmmaker Evgeny Afineevsky.

Apparently referring to Francis' position in Argentina, the documentary used the previously unbroadcast quote about Francis' support for a law governing same-sex civil unions, or "a law of civil cohabitation" as it was referred to in Argentina.

The Vatican frequently edits the pope in official transcripts and videos, especially when he speaks on sensitive issues.

Further muddying the waters was the fact that Afineevsky, when pressed by reporters late Wednesday, said the pope made the comments to him directly, through a translator, but declined to say when.

The AP was provided with a preview of the documentary under condition it not report on the film until Wednesday's premiere. In an interivew Oct. 14 with the director, AP asked if he realized that Francis' comments were going to grab headlines.

Afineevsky dodged the question about the origin of the quote and seemed to not appreciate its significance. But he said he hoped journalists would take more away from the film.

"If journalists will be focusing on this movie only on that, then it will be a pity," he said. "But I think that's one of the issues that our world needs to understand, that we're all equal."

The head of the Vatican communications branch, Paolo Ruffini, refused to speak to reporters who attended an award ceremony Thursday in the Vatican gardens for Afineevsky, and the director himself kept his distance.

The head of the Vatican communications branch, Paolo Ruffini, refused to speak to reporters who attended an award ceremony Thursday in the Vatican gardens.

The Catholic Church teaches that gay people must be treated with dignity and respect but that homosexual acts are "intrinsically disordered." A 2003 document from the Vatican's doctrine office stated the church's respect for gay people "cannot lead in any way to approval of homosexual behavior or to legal recognition of homosexual unions."

Doing so, the Vatican reasoned, would not only condone "deviant behavior," but create an equivalence to marriage, which the church holds is an indissoluble union between man and woman.

Afineevsky, who is gay, had expressed surprise after the premiere that the pope's comments had created such a stir, saying Francis wasn't trying to change doctrine but was merely expressing his belief gay people should enjoy the same rights as heterosexuals.

On Thursday, he declined to take any further questions and sought to put attention on the main issues dealt with in the film: climate change, refugees and poverty.

"I am so proud that finally 'Francesco' is on its way to the road to change hearts and minds," he said at the prize ceremony in the Vatican gardens. "Finally, I am happy that I can bring voices from the Rohingya refugees, refugees from Syria, the voices of victims of sexual abuse, voices from different points from different corners of the world."

Provide feedback on this article
Join the conversation: Login or create an account
Before you can comment, you need to update your profile to include your first and last name, as required in our comments policy. Then reload this page and you'll be set up for commenting. Update your profile
More: Pope Francis / LGBT / Vatican