This Catholic doula wants to broaden our understanding of ‘reproductive justice’ 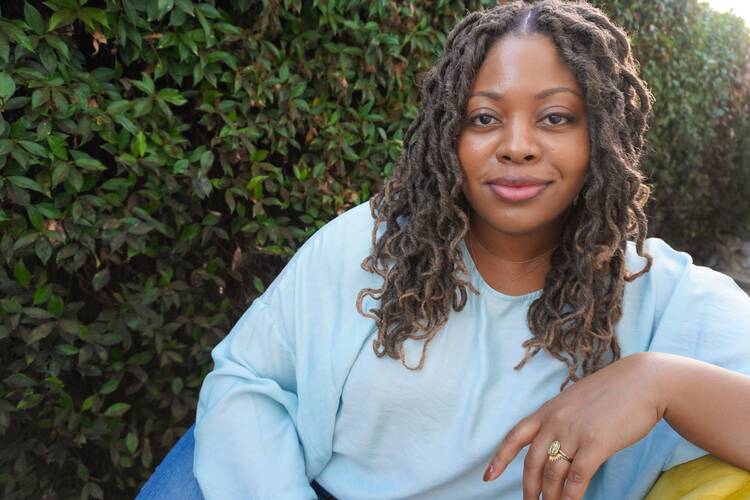 Rebecca Christian’s work as a doula has convinced her of the importance of reproductive justice, a term she hopes people fully understand, whether they are advocating for it or criticizing it.

In a preview clip of her upcoming talk at FemCatholic’s Women, Sex, and Empowerment Summit, which will be held virtually on Oct. 24, she attempts to paint a picture of how far-reaching the term “reproductive justice” really is. She speaks directly to listeners, saying, “You have the right to dignified health care that affirms the integrity of your body, no matter who you are.”

Ms. Christian pointed out that for many younger people “reproductive justice” suggests advocacy for abortion access and birth control, a limited focus often shared by the pro-life community. But in her upcoming presentation, Ms. Christian plans to explore a broader understanding of reproductive justice that might surprise people who only know the term from popular discourse.

Rebecca Christian offers a broader understanding of reproductive justice that might surprise people who only know the term from popular discourse.

Ms. Christian is a birth and postpartum doula, and she supports families after miscarriages through their bereavement. As she explained, doulas provide “physical, mental and spiritual support to families during pregnancy, birth and the postpartum period.” She has also recently been certified as a lactation counselor and educator.

The Covid-19 lockdown in California briefly put some of her work on hold, but as restrictions have lifted, Ms. Christian said, her schedule has been filling up. Some of the other businesses families would have enlisted for pregnancy support are no longer open. Now many are scrambling for assistance as soon as possible, and she has been hired much earlier in the course of some pregnancies than she was before the pandemic.

As a student at Loyola Marymount University, a Jesuit university in Los Angeles, Ms. Christian could not have imagined the ways in which she would be working for justice today. She studied screenwriting and theology, and she worked in the entertainment industry for several years before deciding it was time for a change. She resisted suggestions from a close friend, who is also a doula, to get trained and work in that field for a long time before she finally gave in.

Almost five years later, she runs Fiat Doula Services, which she named to honor Our Lady. (Fiat, the Latin word meaning “let it be done,” is often used to refer to Mary’s total acceptance of God’s will for her when she heard she would give birth to Jesus.) But the name also grounds Ms. Christian’s approach to her work. “I think it’s appropriate thematically on how I view my role in terms of helping women say yes to motherhood and the maturity becoming a parent demands,” she said.

Ms. Christian shares her faith on her website: “I am a Catholic Christian doula, and work with women of all backgrounds. I tell you about my faith because it informs my philosophy on how I think women and babies should be treated: with respect, awe, and reverence.”

“I have this new person being born into the world and people who are becoming parents, and God chose them to be together. It’s my job to help them realize that and find some confidence in being a new family.”

In dealing with some of the difficulties of her work, Ms. Christian has found her faith to be an asset, even though most of her clients and fellow workers in the medical field and women’s health care are not at all religious. “What I’ve found is that my faith is what brings me through. It’s what helps me to be a steady rock in some of these situations.”

That has been especially true when she has been supporting families who have experienced the pain of miscarriage. She works in a caregiving profession that suffers a rate of burnout so high she was told she would likely last just two years.

But almost five years later, Ms. Christian has found a way to remain grounded. “I attribute that to my strong support system and to my faith because I have something else pouring into me as I pour out for other people.”

Even so, not everything about being a practicing Catholic working in women’s health care has been easy. Having grown up in traditional Catholic circles and around pro-life culture, Ms. Christian has experienced tension because of the hard-earned insights she gleaned on the job: “While I still totally affirm the right to life, this job has shown me the depth and the breadth of problems with the pro-life movement, especially as a political movement.”

She has been surprised to learn that even Catholic and pro-life clients struggle with some of the same hurdles that prevent many people from “treating their babies as people, in the womb and out of the womb. That is sometimes difficult to do…. It’s a cultural thing; we treat children like objects.”

It is important to Ms. Christian to help all clients, regardless of religious background—or none at all—to recognize the humanity of their children and then to connect with them: “I have this new person being born into the world and these one or two people who are becoming parents, and God specifically chose these people to be together. It’s my job to help them realize that and find some confidence in being a new family.”

Ms. Christian will join 13 other speakers at the Women, Sex, and Empowerment Summit, which aims, its website states, to “kickstart a conversation among Catholic women…. around sexuality, from a perspective centering women’s experiences and working to reconcile with the teachings of our Catholic faith.” The title of Ms. Christian’s talk at the summit is “The Right to Know Yourself: Fertility Awareness & Reproductive Justice.”

The church doesn’t talk enough about postpartum depression. These Catholic women are changing that.
Kerry Weber

She will share her beliefs about each individual’s right to information about their health and access to care and explore the social history that has led to serious problems in the U.S. health care system, especially inequities that lead to poor health outcomes for many communities. She said her perspective will be informed by her experience as a Black woman working in women’s health care and the fuller understanding of reproductive justice that finds its roots in Black feminism.

Catholics, she said, are waking up to the ways the U.S. health system fails new families, particularly in marginalized populations. In September, she was a guest on the UnCommon Good, a podcast from Iowa Catholic Radio, and discussed Black maternal mortality rates in the United States. That was a subject no Catholic group had ever asked her to talk about before. Especially since it is common for pro-life supporters to discuss Black abortion statistics, Ms. Christian was grateful to provide broader context on that problem.

One hallmark of reproductive justice she will discuss at FemCatholic’s conference is the concept of autonomy—an important idea that she believes Catholics still need to incorporate into their discourse on birth and family. In Ms. Christian’s view, “you can be pro-autonomy and still be pro-life.”

While she notes that reproductive justice, as a secular theory, will necessarily have limitations, she does not think that should mean that Catholics write it off. “Our responsibility as Catholics is to live [our] intention, engage with these ideas and parse out the truth and parse out solutions where we can and work with people where we can. I don’t think it’s my job as a Catholic to only work with people who think exactly like me.”

[Read this next: The church doesn’t talk enough about postpartum depression. These Catholic women are changing that.]