Sister Simone Campbell, of ‘Nuns on the Bus’ fame, to step down as head of Network 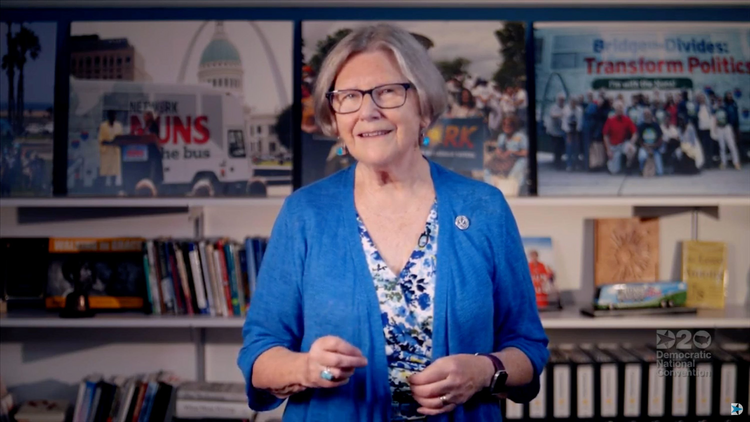 Simone Campbell, S.S.S., the Catholic sister and social justice activist made famous by headlining “Nuns on the Bus” tours, announced she will step down from her post leading Network Lobby this March, the social justice organization said in a press release Oct. 20. Sister Campbell, a fixture in progressive Washington circles, has led the organization since 2004.

“I could not be more proud of what NETWORK has accomplished,” Sister Campbell said in a statement. “From economic justice to immigration; peace building to expanding health care coverage; the environment to voting rights, NETWORK is doing the work needed to protect the most marginalized people among us.”

In a press release, Network listed several accomplishments it achieved under Sister Campbell’s leadership, including launching “Nuns on the Bus,” a public advocacy initiative that hosted more than 350 events since its inception in 2012, as well as organizing Catholics to pressure lawmakers to pass the Affordable Care Act in 2010. Speaker of the House Nancy Pelosi praised Sister Campbell’s work on behalf of the health care measure.

Simone Campbell, S.S.S., the Catholic sister and social justice activist made famous by headlining “Nuns on the Bus” tours, announced she will step down from her post leading Network Lobby this March.

“Sister Simone Campbell is a champion for justice whose life and leadership have blessed our nation,” Speaker Pelosi said in a statement. “Today, as we face the unprecedented coronavirus crisis, Sister Simone and the Nuns on the Bus continue to be key partners in safeguarding the ACA and ensuring its lifesaving protections continue to keep our frontline heroes and all Americans safe and healthy.”

A familiar face in national politics, Sister Campbell spoke at two Democratic National Conventions in 2012 and 2020. Earlier this year, Network launched a campaign against the re-election of President Trump, the first time the organization has taken aim at a specific candidate, though the organization stopped short of endorsing former Vice President Joseph Biden.

Sister Campbell said Network’s decision to oppose Mr. Trump was made after a careful consideration of recent papal teaching.

“Pope Francis makes abundantly clear that we need to care for the marginalized, the victims of trafficking, the hungry, the destitute, the ill,” she said. “Pope Francis goes on and on about who is equally sacred to the care for the unborn.”

The organization created a scorecard comparing the records of both candidates. On abortion, Mr. Trump received a check of approval on the scorecard. But on every other issue, including expanded access to health care, opposition to the death penalty and protecting the rights of workers, Mr. Biden is presented as being more in line with Catholic teaching.

“We see that Vice President Biden has a long history of working for those who are at the margins of our society, of ensuring that they have access to health care and food, that they have access to housing, of caring for victims of domestic violence,” she added. “I’m honored to be a supporter for Vice President Biden for president in this 2020 election.”

Network was founded in 1971 by a group of Catholic sisters who wanted to highlight Catholic social teaching at the federal level.

In 2012, Network was called out by the Vatican following an investigation into the doctrinal orthodoxy of U.S. sisters. A report chronicling the investigation said that Network was “silent” when it came to the church’s fight against abortion, euthanasia and same-sex marriage, which was then illegal in the United States.

“I would imagine that it was our health care letter that made them mad,” Sister Campbell told The New York Times in 2012, referring to a 2010 letter from the organization to lawmakers in support of the Affordable Care Act. The U.S. Conference of Catholic Bishops opposed the legislation because they said it included provisions that went against Catholic teaching. “We haven’t violated any teaching, we have just been raising questions and interpreting politics.”

The Vatican withdrew its sanctions against U.S. nuns in 2015, ahead of Pope Francis’ visit to the United States.

Sister Campbell said that following her retirement she will continue to be active in political advocacy, a passion inspired by watching young people take on white supremacist Bull Connor in the 1960s.

“There are more Bull Connors in this life that we must oppose, and we must work together to seek fairness, justice and equity for the least among us,” Sister Campbell said. “This is work I know Network will continue to lead and I will continue to do in my personal capacity.”

[Listen and subscribe to “Voting Catholic,” a podcast on the top issues in the 2020 election.]