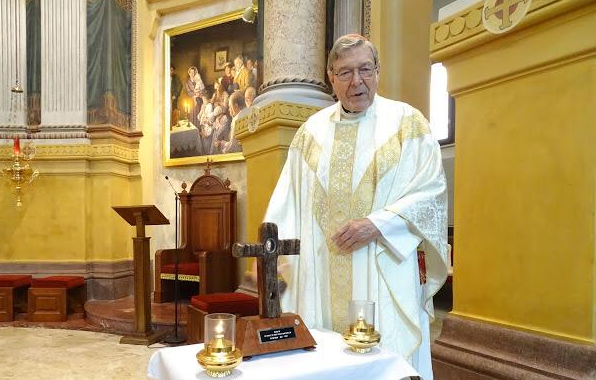 After being received in private audience by Pope Francis last Monday, Cardinal George Pell concluded an unforgettable week by celebrating his first public Mass in Rome since his return to the Vatican on Sept. 30.

Cardinal Pell left the Vatican in July 2017 to face trial in Australia, where he was subsequently convicted and imprisoned for over 400 days on historical charges of the sexual abuse of minors, before finally being totally acquitted by the country’s High Court last April.

He celebrated Mass in the chapel of Domus Australia, a boutique four-star guesthouse for Australian pilgrims, refurbished on the site of a former monastery near the Porta Pia, which he was mainly responsible for establishing in 2010 and which Benedict XVI blessed.

Cardinal Pell celebrated the Mass on the 10th anniversary of the canonization of Mother Mary MacKillop, an Australian religious sister who was born in Melbourne in 1842 and is the country’s first saint. She founded the Sisters of St. Joseph of the Sacred Heart, which established schools and welfare institutions, especially for the education of the rural poor throughout Australia and New Zealand. She was canonized by Benedict XVI on Oct. 17, 2010.

Cardinal George Pell concluded an unforgettable week by celebrating his first public Mass in Rome since his return to the Vatican on Sept. 30.

In his homily, the cardinal recalled that Mother MacKillop’s canonization was warmly welcomed throughout Australia, not only by Catholics but also by many who were not of the Catholic faith. While he spoke about the situation the church is facing today in the midst of the coronavirus pandemic, he made no reference to his ordeal over these past three years. A person present at the celebration, who wished to remain anonymous, told America that the cardinal’s face was marked by a peace and joy that revealed his inner feelings of vindication.

The celebration was Cardinal Pell’s first public Mass in the eternal city since June 29, 2017, when that faculty was removed from him following his being charged for the sexual abuse of minors by the Victoria police in Australia. He protested his innocence then and, with the permission of Pope Francis, left his senior Vatican post as prefect of the Secretariat for the Economy and returned to Australia to face trial and clear his name. He returned to Rome on Sept. 30.

Today’s celebration crowned a memorable week that began last Monday, Oct. 12, when Pope Francis received Cardinal Pell in the private library of the Vatican’s apostolic palace and thanked him for his “witness” of steadfast faith over these past three years as he sought to affirm his innocence.

The Mass was hosted by Domus Australia and its rector, Msgr. John Boyle, with organizational support from the Australian embassy and its new ambassador, Chiara Porro.

The congregation of some 45 persons, in attendance by invitation only from the Australian Embassy and limited in number due to Covid-19 restrictions, included the former Australian prime minister, Tony Abbott, a friend and strong defender of the cardinal who happened to be in town on other business, and the U.S. ambassador to the Holy See, Callista Gingrich, and her husband, Newt. Also present were the rectors of the Venerable English College, Msgr. Philip Whitmore, and of the Beda College, Canon Philip Gillespie, and the Rev. Robert McCulloch, an Australian friend of the cardinal and the procurator general of the Columban Fathers, who has spent much of his life in Pakistan.

A prayer was said during Mass for the late Australian ambassador to the Holy See, Tim Fischer, a close friend of the cardinal who headed the country’s diplomatic mission at the time of the canonization of Mother Mary MacKillop.

At the end of Mass, Ambassador Porro thanked the cardinal for the celebration. Recalling the extraordinary commitment of St. Mary MacKillop in responding to the need for education of so many in her day, especially among the poor, she highlighted the pressing need to give attention to the education of the millions of young poor people in our own day, especially during this time of pandemic and economic crisis.

After the celebration, the cardinal greeted each of those present at the Mass. He is expected to stay in Rome at least until his 80th birthday on June 8, 2021, and possibly much longer.

Correction, Oct. 18, 2020: The original article stated incorrectly that the Mass was organized by the Australian embassy.  Domus Australia organized the event.