Can Ignatian spirituality teach us to engage prayerfully in civic life? 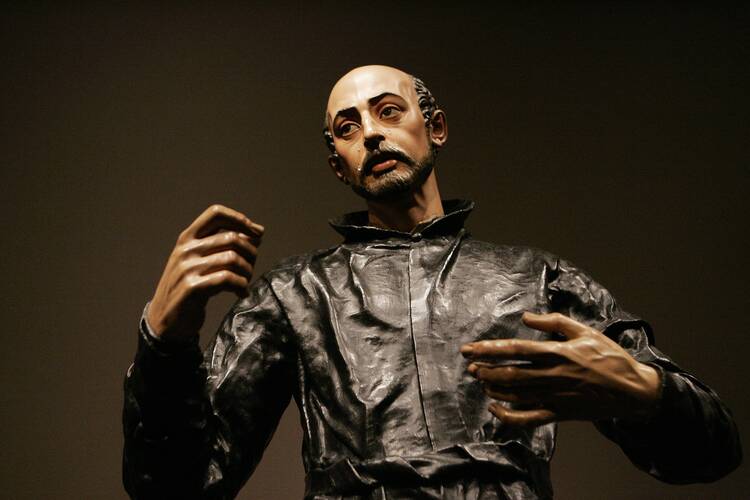 On Tuesday, the Jesuit Conference of Canada and the United States released a new document, “Contemplation and Political Action: An Ignatian Guide to Civic Engagement.” Not quite a voting guide but not only a spiritual document, this resource provides an alternative approach to engagement in the public square through the lens of prayer and reflection.

The authors of “Contemplation and Political Action” said they believe that Ignatian spirituality has something important to add to civic life in the United States.

“Part of what turns some people off to any mix of religion and politics is a potential presentation of God on one side and [the belief that] if you’re not there, you’re against God. This is not the Ignatian approach,” said Ted Penton, S.J., secretary of the conference’s Office of Justice and Ecology. “The question is not about which side God is on; it’s about how God is at work in the hearts of all people. We can examine how that might be the case, even in working with those with whom we disagree profoundly.”

Some of the minds behind the document spoke to America about its development and purpose. They include Tim Kesicki, S.J., president of the conference; Father Penton; and Mike Jordan Laskey, senior communications manager.

A conversation last year between Father Kesicki and Father Penton left them wondering what tools for reflection and political engagement they could offer to the Jesuit network of schools, parishes and other ministries in the United States and Canada. Their vision was a broad one, stretching far beyond one election and highlighting voting as only one of many important ways for Catholics to be involved in the political process. Their idea was also inspired by the Universal Apostolic Preferences, a set of priorities announced by Superior General Arturo Sosa and the Society of Jesus in 2019.

The authors of “Contemplation and Political Action” said they believe that Ignatian spirituality has something important to add to civic life in the United States.

Father Kesicki and Father Penton put together a team, which included Mr. Jordan Laskey, to work on the project. What they came up with used Ignatian spiritual tradition as a foundation for engagement in the public square.

Using Pope Francis’s own words, the first section of “Contemplation and Political Action” suggests to readers that “a good Catholic meddles in politics.”

This is not a new idea for the Jesuit Conference. It has released strong statements in the recent past and throughout its history on a number of topics, including a public statement on abortion and a forceful position on DACA, which protects undocumented immigrants who came to the United States as children from deportation.

Members of the conference have also spoken to Congress about a variety of issues. The Jesuits comply with the Johnson Amendment, which prevents nonprofit organizations from endorsing political candidates. But that does not diminish their commitment to speaking out on important matters without partisanship.

While the document’s authors know that many Catholics are reluctant to mix faith and politics, they hope that its approach will resonate with that audience. The guide does not include lists of political positions to take as a Catholic, but it suggests opportunities for personal engagement through reflection questions, prayer prompts and anecdotes.

Father Penton suggested that one way to prevent political discourse from becoming hostile is to turn to the Ignatian spiritual practice of detachment.

“Catholics can sometimes be seen as politically homeless,” Mr. Jordan Laskey explained. “As people with this beautiful consistency of protecting human life and dignity across the whole spectrum, we are left feeling not all that comfortable with any party platform. It’s important to keep in mind that we want our faith to lead us to our political views, as opposed to our political allegiances leading us to our moral beliefs, which we see happening a lot in this political climate.

“The beauty of detachment comes in recognizing our attachments and being able to set them aside in humility, asking ourselves primarily what is best for our human communities right now,” he added. “What does our country, state or smaller community need to ensure the good of all? It takes some real spiritual maturity to say, ‘I can put my party allegiance aside and really think about what is the best vision forward.’”

“As people with this beautiful consistency of protecting human life and dignity across the whole spectrum, we are left feeling not all that comfortable with any party platform."

The Jesuits’ apostolic preferences make special mention of caring for our “common home,” and the new document reflects this attentiveness to the stewardship of our planet. Father Penton said he is dismayed at the way that U.S. partisan politics have shaped this issue.

“For some reason, it’s seen as conservative to be opposed to environmental protections. To me, there’s nothing more conservative than conserving the planet we live on,” he said. “In other countries, there have been conservative leaders that have been very ecologically inclined and sensitive, so it’s unfortunate that this has become a partisan issue. To me, if there’s anything we should all be able to agree on, caring for the home we all share should be a high priority.”

Father Kesicki draws from what he has heard Pope Francis himself say. “I remember, at our 36th General Congregation, the pope was explicit that ‘Laudato Si” is not only an environmental encyclical; it is a social encyclical. There is a very anthropological, systematic approach to this. The pope has said and written that if you are pro-life, you have to be pro-environment.”

Explainer: Can a priest or a member of a religious order publicly endorse a political candidate?
James T. Keane

Mr. Jordan Laskey agreed, saying, “We care about damages to air, land and water not simply for their own sake, even though they themselves are important. We care also because of their impact on humans, particularly those who are already vulnerable and marginalized.”

"The pope has said and written that if you are pro-life, you have to be pro-environment.”

Returning to the broader issue of respectful dialogue in politics, Father Kesicki pointed to the Ignatian spiritual practice called agere contra, meaning “to act against” in Latin. “Sometimes in discernment, you try on the position that is opposite to your own,” Father Kesicki explained. “You listen to the other side, not just with your pad and pencil ready to refute it, but to ask yourself why someone might hold this position.

“You sit with that, and then you go back to the position you had. More often than not, we revert back to what we originally believed,” he said. “But sometimes we believe differently, perhaps not with as much certitude but with a new understanding.”

Molly Cahill
@MollyKCahill
Show Comments ()
Join the conversation: Login or create an account
Before you can comment, you need to update your profile to include your first and last name, as required in our comments policy. Then reload this page and you'll be set up for commenting. Update your profile