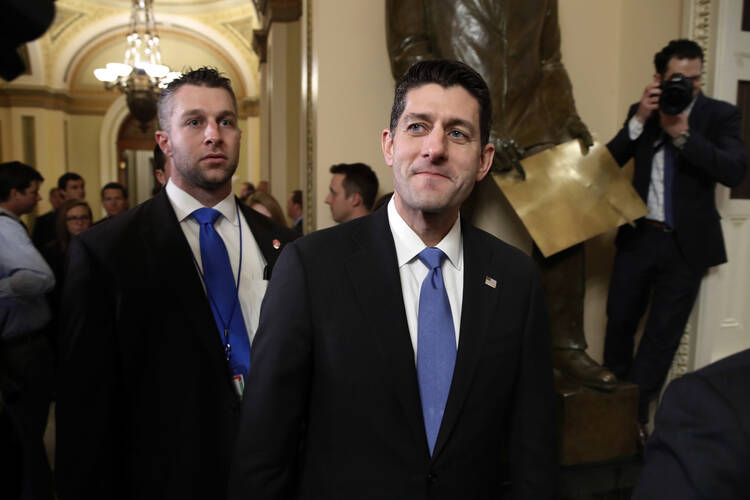 House Speaker Paul Ryan of Wis., center, leaves the House Chamber after voting on the Republican tax bill, Tuesday, Dec. 19, 2017, on Capitol Hill in Washington. Republicans muscled the most sweeping rewrite of the nation's tax laws in more than three decades through the House. (AP Photo/Jacquelyn Martin)

WASHINGTON (CNS) -- A regulation that bars nonprofits and houses of worship from making political endorsements remains on the books after it was dropped from the Republican tax reform bill.

A provision that would have repealed the Johnson Amendment, a 1954 law that bans churches and nonprofit organizations with tax-exempt status from taking part in partisan political activity, had been inserted into the House version of the Tax Cuts and Jobs Act, but not the Senate version.

It was omitted from the final bill that was to be voted on by both chambers before Christmas.

Should churches be able to endorse politicians? Clergy aren't so certain.
Mark Pattison - Catholic News Service
The provision was dropped during discussions as lawmakers worked to reconcile the House and Senate versions of the legislation after the Senate parliamentarian determined it did not meet the chamber's rules.

Despite the move, advocacy groups on both sides of the issue expect another attempt to roll back the amendment's restrictions on political speech for federally recognized nonprofits to occur in 2018.

The final version of the tax cut bill was headed for a vote in the House Dec. 19. The Senate vote was to follow. With passage expected in both chambers, the bill was expected to be on President Donald Trump's desk by Dec. 22.

The Johnson Amendment was named for President Lyndon Johnson, who inserted the measure in tax code legislation in 1954 when he was Democratic senator from Texas. It banned all federally recognized nonprofits, including religious organizations, from endorsing candidates and other participating in partisan political activity at the risk of losing their tax-exempt status.

The U.S. Conference of Catholic Bishops has taken no stance on the amendment.

In May, Cardinal Daniel N. DiNardo of Galveston-Houston, USCCB president, told Catholic News Service that the amendment was likely more important to evangelical Christians than Catholics.

He explained that the U.S. Catholic Church "has the tradition of 'Faithful Citizenship,'" the bishops' quadrennial document on political responsibility, which puts the Johnson Amendment in a bigger context.

"Forming Consciences for Faithful Citizenship" guides voters not according to the stances of specific political candidates but Catholic social teaching.

Groups including the Alliance Defending Freedom and the Family Research Council have argued that the Johnson Amendment infringes on free speech. They have pushed Congress for years to abolish IRS rules that bar churches and nonprofits from advocating on behalf of a specific candidate.

A May 4 poll by the Public Religion Research Institute found that 71 percent of Americans favor the amendment, as do all major U.S. religious groups.

Trump called for repeal of the amendment during his 2016 presidential campaign and has repeated his desire to see it rescinded since becoming president.

While it would take congressional action to entirely do away with the regulation, Trump can direct the Internal Revenue Service not to enforce it.

Critics of repealing it have said churches would be flooded with political contributions that would taint their integrity.

Catholics can be both grateful for, and proud of Cardinal DiNardo for the explanation he offered with respect to the Johnson Amendment. And we should value the fact that his rationale refers, implicitly, to the distinction between ideology and truth so eloquently expressed by Pope John Paul II in Centesimus Annus and re-expressed in various forms by every pope since then.

As a reminder, the encyclical states:

“Nor does the Church close her eyes to the danger of fanaticism or fundamentalism among those who, in the name of an ideology which purports to be scientific or religious, claim the right to impose on others their own concept of what is true and good. Christian truth is not of this kind. Since it is not an ideology, the Christian faith does not presume to imprison changing sociopolitical realities in a rigid schema, and it recognizes that human life is realized in history in conditions that are diverse and imperfect. Furthermore, in constantly reaffirming the transcendent dignity of the person, the Church's method is always that of respect for freedom.”