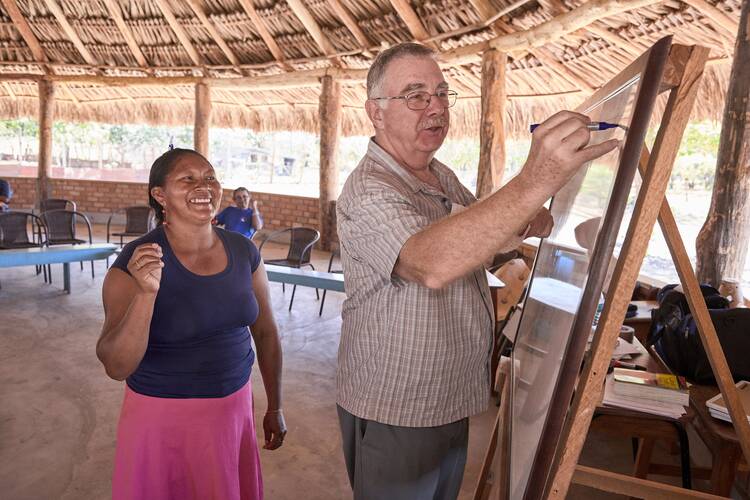 Father Ron MacDonell, a Scarboro missionary from Nova Scotia, writes on a whiteboard in July 2019 as he leads a workshop in St. Ignatius, Guyana. Based in Brazil, the Canadian is a linguist who helps indigenous people in the Amazon region improve their reading of the Scriptures in their own languages. (CNS photo/Paul Jeffrey)

After just over a century of activity, the Scarboro Foreign Mission Society, aging and declining in membership like many other religious communities in Canada, is preparing for its end. Founded in 1918 with a focus on China, the society trained hundreds of ordained and lay missionaries. Their work eventually spread across the globe in 19 countries. Like the Maryknoll missionaries, their U.S. counterparts, Scarboro missionaries are known for living the Gospel and contributing powerfully to social justice efforts in some of the most impoverished regions of the world.

In 2017, however, the mission told its supporters that with few applications and facing challenges as the members of the society grew older, it would no longer accept lay or priest candidates for missions.

Yet while they are going through this profound change, Canada’s Scarboro priests still have plenty of life left in them, and they plan to continue their work for justice, bringing all their experience to bear on their efforts. “I don’t see the decline in membership or candidates coming forward as a reflection on us,” said Jack Lynch, S.F.M., general superior of the Scarboro missionaries. “It’s a call in the spirit to move us on to something else.

“I’m 52 years ordained. I’ve had a chance to do things I never dreamt,” said Father Lynch. “I’ve been to China; I’ve been through Asia and Latin America. I’ve seen the world, peoples, the church and faith experience of many. But that also gives me an obligation to make known what I’ve learned or experienced, not just sit back and retire. So I see that the mission is ongoing.”

Scarboro missionaries are known for living the Gospel and contributing powerfully to social justice efforts in some of the most impoverished regions of the world.

But what happens when a missionary priest retires? For many Scarboro priests, retirement will mean coming back to Canada after years immersed in a different culture on another continent.

“There’s a variety of experiences,” said Father Lynch. “Some find it very difficult to readjust to a culture they thought they knew. When they come home, the changes are so dramatic and radical that they have to really go through another enculturation process.”

Father Lynch, originally from Toronto, has done his fair share of adjusting. He began his ministry in Canada in 1968 and went to Peru as a parish priest in 1975. In 1982, he returned to Canada for six years before moving to Panama to serve as the executive director of the Interamerican Cooperative Institute, a hub for social movements and theological reflection. Elected to leadership of the society in 1997, Father Lynch came back to Canada, where he has lived ever since.

Coming back to Canada, of course, means more than reacclimating to winter for the returning missionaries. “I think it’s very difficult when you become accustomed to being in an environment in the [Global] South," Father Lynch said. "Most people have worked in the Philippines or Latin America, where clerics are held in high esteem. In Canada, that’s not the case. They have to realize what they have lived and what’s expected of them now.”

Father Lynch insists, though, that while these contexts are different, “the mission is the same.” He said the key to navigating these changes is to be a good listener, something he learned in his own work in the field. “I find myself listening constantly. When I look back, people say I evangelized, but I say I was also evangelized at every moment when I was in Latin America. The spirit of God is present in the other and not just in me or my reality.”

Not all Scarboro priests have decided to live out their retirement in Canada. Omar Dixon, S.F.M., came to Brazil in 1968 and chose to remain there, living in a house built by the people of Itapiranga, Amazonas. He died last year and was buried there.

“When I look back, people say I evangelized, but I say I was also evangelized at every moment when I was in Latin America. The spirit of God is present in the other and not just in me or my reality.”

For some Scarboro priests, however, retirement does not mean choosing between Canada and their adopted homes. “I could see a both/and, snowbirding in the Amazon,” said Ron MacDonell, S.F.M., at 62 still abroad in the Diocese of Roraima in Brazil. “Many Canadians will go to Florida and sit around shopping malls,” he said. “Why not come to Brazil?”

Apart from some time in Mexico and Canada, Father MacDonell has spent most of his ministry in Brazil, where he cut his teeth as a parish priest, getting involved in local struggles defending lake access and fishing rights. Feeling a call to be with indigenous people, he returned to Canada to complete a master’s degree in linguistics and went to Roraima, where he started work on language revitalization efforts with the Makushi, an indigenous people.

After working with the Makushi for a few years, he returned to Canada to finish a doctorate in sociolinguistics in Quebec, writing a dissertation on the Makushi language. Today, he works among the Makushi, helping to prepare Makushi grammar books, dictionaries and radio programs.

When Father MacDonell returns, he intends to continue his efforts in a Canadian context. “I would be extremely interested in getting involved in indigenous issues, both cultural and linguistic,” he said.

Scarboro missionaries have a long history of working with indigenous peoples across the Americas, including bringing communities from Canada and the Global South together. Father Lynch said this has sometimes raised “alarm bells,” including among the Royal Canadian Mounted Police, Canada’s federal police force. The R.C.M.P. once surrounded the mission’s former residence in response to an event bringing indigenous leaders together.

“We have, over the years, tried to set up solidarity networks,” said Father Lynch. “There have been a number of occasions when we’ve met people, seen the precariousness of life and have been profoundly touched by it.”

Father MacDonell himself had already started learning Cree when he lived in Toronto between 2012 and 2017, when he served on the Scarboro Missions’ General Council. He said he is interested in also learning Punjabi, Mandarin or Cantonese, some of Canada’s other common immigrant languages.

“When someone makes the effort to learn someone else’s language, it’s unexpected,” said Father MacDonell. “Most Canadians aren’t interested in learning these languages, so it’s a way of affirming people in their cultural identity. It’s the same here over the years with the Makushi people. It’s like a key that opens their heart. Let’s say you’re in Asia and someone speaks to you in English; it’s an automatic closeness that you feel.”

Regardless of where the Scarboro priests finally end up, the end of the society is a profound loss for Canadian Catholicism, according to Michael Attridge, a professor at the University of St. Michael’s College in Toronto. “There are far more religious communities in Quebec, but in upper Canada [the region that preceded modern day Ontario], where Catholicism was a minority, it’s the loss of one of the very few religious communities that are indigenous to that area,” he said. “To me, that’s significant for the history of social Catholicism in upper Canada and Ontario.

“It’s also a loss of a presence that worked for social justice, that was dedicated to social justice,” Mr. Attridge said. He added that the loss is palpable as people from religions other than Christianity have become more and more present in metropolitan and urban areas, increasing the need for interfaith dialogue and outreach, which the Scarboro priests have made a priority. “That’s the lament. The loss of a persistent presence, through a religious community.”

At the same time, Mr. Attridge emphasized that the Scarboro priests have “done a terrific job of dispersing their charism,” including funding a diploma program at St. Michael’s in interfaith dialogue. As communities like the Scarboro Foreign Missions decline, Mr. Attridge thinks that Canadian Catholicism is entering “a period where the laity will need to find ways of continuing that legacy, to respect, preserve, and promote the work that the Scarboro Foreign Missions has done.”

As a Christian, Mr. Attridge said, he has hope that the Holy Spirit will guide the church through this transition. “Although we lament the loss, we see all sorts of signs of hope for the future.”

Father Lynch also remains hopeful. He described the decline of the society as a “paschal death.”

He added, “I want to live the rest of my life being as consequential as possible, keeping my eyes and mind open. I want to be able to be vulnerable, to say, ‘Yes, there’s something else here.’”

Father Lynch said he wants to be able to say the Scarboro priests have passed on a spirit of hope and trust, even as the future is unknown. “We want to encourage young people and anybody who’s searching to try to live out the Gospel,” he said.

“It’s not always going to be the way I think it should or could be, but let them search. Let them go forth. I want to see something happen, and I’m willing to let that happen.”

Correction: The Scarboro Foreign Mission Society is a society of apostolic life, not, as originally reported, a religious order. The article has been updated throughout to correct the error.

@deandettloff
Provide feedback on this article
Join the conversation: Login or create an account
Before you can comment, you need to update your profile to include your first and last name, as required in our comments policy. Then reload this page and you'll be set up for commenting. Update your profile