Explainer: What is an invalid baptism? 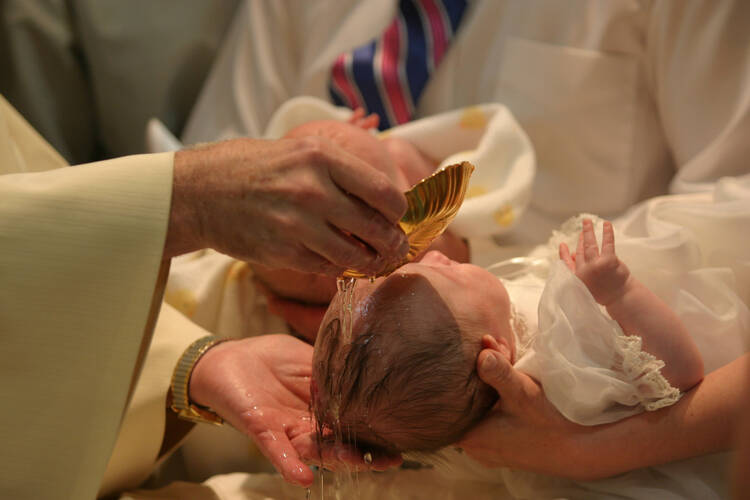 The Rev. Matthew Hood of the Archdiocese of Detroit recently discovered that his baptism as an infant had been invalid when he watched a family video that showed Deacon Mark Springer saying, “We baptize you in the name of the Father, and of the Son, and of the Holy Spirit.” The Congregation for the Doctrine of the Faith had recently made an official statement deeming this language improper for the conferral of baptism.

Not only did this affect Father Hood himself and the many people who had received sacraments from him, but it also brought about significant questions from the people of the church about what the case means for sacramental life.

The person acting as minister must intend to do what the church intends to do with the sacrament.

Most prominent among these questions are the sacramental validity of the baptisms, confessions, marriages and more that Father Hood performed during his priestly ministry. John Baldovin, S.J., a sacramental theologian and professor at the School of Theology and Ministry at Boston College, offered America explanations for many of the important questions that have arisen as a result of Father Hood’s case.

Father Baldovin noted that the Congregation for the Doctrine of the Faith has the authority to say what is and is not valid when it comes to sacramental language and form. Theologians, however, also have the right to raise questions, he said.

It is important to recognize, Father Baldovin noted, that other forms of baptism have been used validly in the church throughout history. Even today, some Eastern churches, both Orthodox and those Eastern Catholic churches in union with Rome, use a different form. Some early churches used an interrogatory form in which the baptismal candidate was asked a set of questions about his or her belief in the Father, the Son and the Holy Spirit, and was immersed in the baptismal font after each affirmative answer.

It is important to recognize, Father Baldovin noted, that other forms of baptism have been used validly in the church throughout history.

Baptism is unique in that any person can be its minister. Father Baldovin points out, though, that the person acting as minister must intend to do what the church intends to do with the sacrament. Importantly, that intention must be expressed both internally and externally. While it could reasonably be assumed that Deacon Mark Springer baptized Father Hood with good will in his internal intention, his external expression of the sacrament—even if its aberration from the essential form was an honest mistake—is what the statement from the C.D.F. invalidates.

The central question of the case lies in the matter of sacramental validity—in other words, the church guarantees that God’s grace is present in the sacramental act. Father Baldovin makes an important suggestion about validity’s meaning and impact: “Too many people think invalid means unreal.”

While we can be sure that God acts in sacraments properly conferred, Father Baldovin said, the boundaries of God’s grace and power are not delineated by the sacraments alone. The deacon’s errors were meaningful and should not be repeated, he noted, but they do not necessarily limit God’s power to act.

Father Baldovin takes heart from seeing that so many Catholics have been asking questions about Father Hood’s case. “The good news here is how seriously Catholics take their sacramental life,” he says.

He acknowledges, though, that focus on validity alone can cause Catholics to forget what the sacraments are ultimately for. Remembering God’s expansive grace, in and beyond the sacraments, can ground our questioning.

“Very often we tend to think the worst of God instead of the best,” he says. “I don’t mean that we should take God for granted, but we can give God the benefit of the doubt.”

[Read this next: Interview: Father Matt Hood, the priest who discovered he was invalidly baptized (and ordained)]

Molly Cahill is a Joseph A. O’Hare Fellow at America Media.