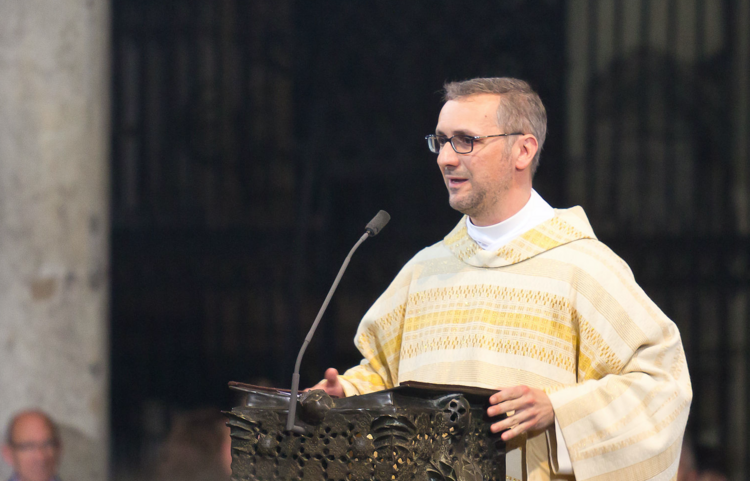 The archbishop of Hamburg, Stefan Hesse, has called for an open debate on the ordination of women in the Catholic Church.

“One has to be permitted to think about and discuss the issues,” the German archbishop said on Aug. 19. He argued that “Ordinatio sacerdotalis,” St. John Paul II’s 1994 letter that stated the church cannot ordain women as priests, was positioned as a response to those who considered women’s ordination “open to debate” and affirmed the male-only priesthood “in order that all doubt may be removed regarding a matter of great importance.”

Archbishop Hesse said new arguments had emerged in the conversation around women’s ordination that needed to be addressed. “The historical perspective is one thing—but it isn’t everything,” he said.

Archbishop Hesse said new arguments had emerged in the conversation around women’s ordination that needed to be addressed.

Archbishop Hesse is a member of the forum on “Women in Ministries and Offices in the Church” in the “synodal journey” reform project launched by the Catholic Church in Germany. The project places laypeople—represented by German’s prominent lay organization, the Central Committee of German Catholics—in dialogue with that country’s bishops on a range of topics relevant to the church today, including sexuality, priestly celibacy and women’s roles. The lay committee openly supports ordaining women both as deacons and priests.

The archbishop said he hoped the reform talks would examine controversial issues and that the bishops would convey the results to Rome. “But I also hold the realistic view that this will not answer or resolve the issues,” he said.

The reform project, announced in 2019 as a “binding synodal process” in response to a 2018 report on sexual abuse in the German church, has caught the attention of Pope Francis and the Vatican. In June 2019, prior to the group’s first meeting, Pope Francis wrote a letter to the group that has been interpreted as suggesting the church in Germany take a separate, similar “synodal journey” focused on evangelization. This was followed by a Vatican legal review last September, which stated that the synodal journey’s plan to reach binding decisions meant the meeting was actually a “plenary council,” which would require approval from the pope.

A German bishops’ conference spokesman dismissed the Vatican’s concern, saying that Rome had not seen up-to-date planning documents that omitted “some passages to which the assessment refers.” The spokesman said Cardinal Reinhard Marx, then-president of the German bishops’ conference, planned to meet with Cardinal Marc Ouellet, whose letter accompanied the legal review, to “clear up any misunderstandings.”

When asked whether he supported the priestly ordination of women and people who do not identify as men, Archbishop Hesse said he was entering the reform talks with an open mind.

In the end, it was concluded that the synodal journey’s decisions are not canonically binding and will not need to be approved by Rome. But, as Francis stated in his letter, any reforms must follow Catholic teaching. Implementing the decisions will be up to each German bishop and diocese.

The German church’s new president, Bishop Georg Batzing, has called for a church-wide synod to be held in Rome to discuss the synodal journey’s conclusions.

Some participants have stepped back from the synodal journey, including International Theological Commission member Marianne Schlosser and an auxiliary bishop of Cologne, who cited concerns that the group endorses or is fixated on changing church teachings.

At 54, Archbishop Hesse is Germany’s youngest bishop and has been particularly outspoken on climate change and the European migrant crisis. On behalf of the German bishops, Archbishop Hesse distributed 100 million euros in aid to migrants and designated 800 unused church-owned buildings for migrant housing.

When asked whether he supported the priestly ordination of women and people who do not identify as men, Archbishop Hesse said he was entering the reform talks with an open mind. “If the results are already fixed at the beginning, then I have no interest in the [synodal journey].”

Correction, Aug. 20: The original news story from KNA used for this report included a sentence about theological reflections about the Incarnation that was not attributed to any source. Because the source remains unclear, the line has been removed.