The Vatican and China may renew their secret deal soon. Here’s where their relationship stands. 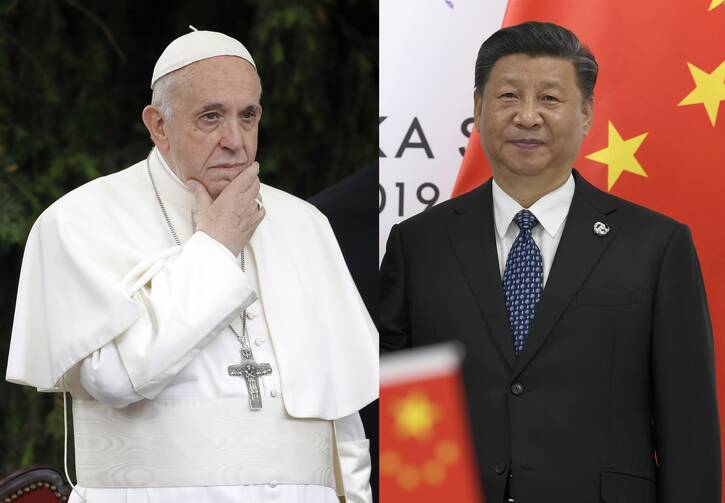 VATICAN CITY (RNS) — Aboard the papal flight returning from Japan in late 2019, Pope Francis told reporters about his hope to visit China one day.

Since then, the tensions surrounding China have only increased after the revolts in Hong Kong, reports of human rights violations in the country and the COVID-19 pandemic.

The renewal of a secret deal between the Vatican and China, to be signed in September, is already splitting Catholics and risks heightening tensions further.

Vatican officials believe a deal with China could improve the lives of Chinese Catholics, especially those in the underground church. But critics fear the deal is already keeping Pope Francis silent on human rights abuses by the Chinese government, including its crackdown on Muslim Uighurs.

The contents of the deal are for the most part unknown.

A provisional agreement was signed in September 2018 between Chinese and Vatican officials but most of its details have remained under wraps.

That agreement allowed the Chinese Patriotic Catholic Association to select nominees for bishops, whose names would then be submitted to the pope for approval.

Such deals have not been unheard of in the history of the Catholic Church, especially when countries have feared the excessive political and territorial influence of foreign clergy.

Sino-Vatican relations have been difficult from the beginning.

Catholic missionaries came to the country starting in the 13th century and converted large numbers to their faith. When the Communist Party took over China in 1949, all Christian missionaries were expelled.

As a result, the Vatican and China interrupted diplomatic relations. The Chinese government created the Chinese Patriotic Catholic Association to oversee Catholics in the country, but the association was not recognized by the Holy See.

There are now 9 million Catholics in China, according to a 2011 study by the Pew Center; 5.7 million of them are under the umbrella of the C.P.C.A. The sheer size of the Catholic population in the country has motivated efforts by numerous pontiffs to bridge the divide.

There are other reasons why brokering a deal with China would be beneficial to the Catholic Church.

A significant portion of Catholics in the country are part of an “underground church” that is not recognized by Chinese state authorities and risks being sanctioned or persecuted.

As an olive branch to push forward mediations, Pope Francis recognized eight bishops chosen by the CPCA who had previously been excommunicated by the Catholic Church.

In turn, the Chinese government recognized three bishops from the “underground church” over the summer.

There are still more bishops who guide the undercover Catholic community in China and whose situation—as well as that of their followers—is at risk.

Securing a deal between the Vatican and China might be the only way to ensure their safety and the possibility of openly professing their faith.

Talks between the Vatican and Chinese officials began in July. According to the vice chairman of the Chinese Catholic Bishops’ Conference, Bishop Zhan Silu, it is likely that an official deal will be signed in September.

The upcoming agreement, he told the Chinese government paper Global Times, is “a key link that secures China-Vatican ties and could help push relations to the next step.”

The second-highest-ranking official at the Vatican, Italian Cardinal Pietro Parolin, is among the supporters of the deal. In an interview with Global Times, the prelate—who is considered a close papal ally—spoke of “an increased trust between the two sides.”

According to Parolin, the deal is “for the benefit of the entire Chinese Catholic community, which I embrace fraternally—above all those who have suffered most and continue to suffer.”

The head of the Pontifical Academy of Sciences, which promotes discourse between the Catholic Church and the scientific community, is also a proponent of the Chinese-Vatican deal. Speaking to local reporters, Bishop Marcelo Sánchez Sorondo upheld China as the country that is “best implementing the social doctrine of the church.”

In 2019, the head of the C.P.C.A. attended the Vatican summit of bishops on Young People, Faith and Vocation, which seemed to be yet another step toward the possibility that the pope might one day crown the aspiration of being the first pontiff to visit China.

While many have praised the possibility of a deal, it has also been the subject of severe criticism by Catholics both inside and outside China.

“The agreement which the Vatican made with the People’s Republic of China in 2018—of which there is still no public record—has been, in practice, a repudiation of the tremendous suffering of countless Chinese confessors of the faith and martyrs for the faith at the hands of the atheistic communist government and has only resulted in a greater ongoing persecution of faithful Chinese Catholics,” said Cardinal Raymond Burke in an interview with The Australian last April.

The cardinal said that something “is badly wrong” at the Vatican, which praised the medical assistance it received from China and not the one it had from Taiwan.

The Vatican was among the first countries to recognize Taiwan, the island nation that became the home of the losing Chinese democratic politicians after the rise of the Communist Party. The future of the relations between the Vatican and China are at stake, depending on the outcome of the deal.

But it’s not just Catholic conservatives who have objected to the Vatican’s supposed “blind eye” when it comes to calling out the Chinese government for its behavior.

Over 70 faith leaders from Jewish, Buddhist, Muslim and Christian denominations signed a statement on Aug. 8 condemning China’s treatment of the roughly 1 million Uighur Muslims in the country. The faith leaders likened the policy of mass sterilization, oppression, persecution and internment to “one of the most egregious human tragedies since the Holocaust.”

The statement accused China of perpetrating a “genocide” that “if allowed to continue with impunity, calls into question most seriously the willingness of the international community to defend universal human rights for everyone.”

Cardinal Charles Maung Bo, president of the Asian Bishops’ Conference, and Archbishop Ignatius Suharyo Hardjoatmodjo of Jakarta were among those who signed the document.

Pope Francis has remained quiet regarding the plight of the Uighur community in China and his critics believe his silence is because he doesn’t want to stir the waters before signing the deal.

Francis’ reticence in condemning China also emerged during his weekly blessing in St. Peter’s Square on July 5. His pre-written speech included a comment on the riots in Hong Kong due to China’s wish to impose national security laws in the independent region. The pope never delivered the words, sparking controversy.

The former bishop of Hong Kong, Cardinal Joseph Zen, is an outspoken critic of the Sino-Vatican deal and he has condemned China’s human rights violations, especially with regard to religious minorities. Cardinal Zen has also spoken on behalf of the underground Catholic Church in China.

A series of reports published by AsiaNews, the official media outlet of the Pontifical Institute for Foreign Missions, highlighted the limitations that continue to exist for Catholics wishing to live out their faith, from church closures to a prohibition on religious education before 18 years of age.

Further complicating things is the recent report that the Chinese hacked the Vatican’s computers ahead of the negotiations in May. The story, first published by The New York Times, revealed that Chinese government-backed hackers attempted to steal information from the Vatican’s mission to China.

The Catholic Church had reached a standstill in its relationship with China before the preliminary deal was signed in 2018, opening the door to the possibility of the Vatican having a say on the future of the many Catholics in the country.

[Read this next: The Extremely High Stakes of the China-Vatican Deal]