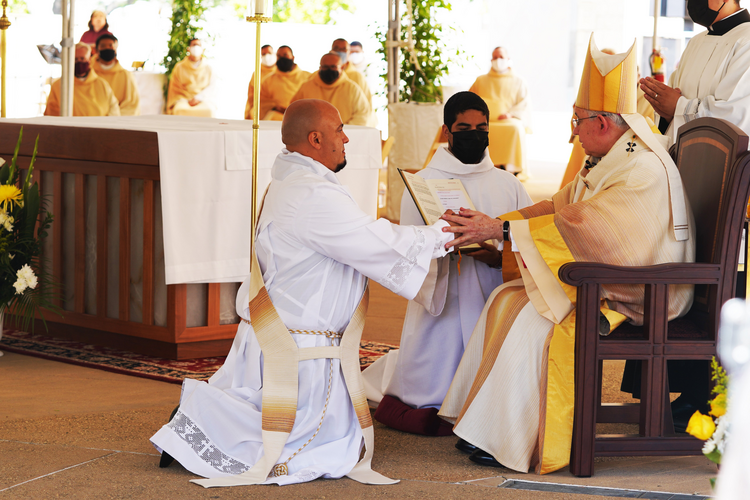 Los Angeles Archbishop Jose H. Gomez blesses Father Daniel Garcia as he ordains eight new priests Aug. 8, 2020, on the plaza of the Cathedral of Our Lady of the Angels in Los Angeles. (CNS photo/courtesy Archdiocese of Los Angeles)

LOS ANGELES (CNS) -- Archbishop Jose H. Gomez of Los Angeles greeted the relatively small, socially distanced gathering that had come to witness the ordination of eight men to the priesthood Aug. 8 at the Cathedral of Our Lady of the Angels.

In some ways, it was like any other ordination at the cathedral, with all the same prayers, blessings, and traditions common to the rite of ordination in the Catholic Church.

But of course, this would be an ordination unlike anything the Catholic Church in Los Angeles had ever seen. This was a moment that had been delayed more than two months due to the coronavirus pandemic. Attendance was limited to 100 people, and before the Mass began, there were instructions on what, and mostly what not to do, i.e., no shaking of hands during the sign of peace, no removal of your face mask, except when it's time to consume the body of Christ, for which there's an area designated with a yellow "X" to do that.

Archbishop Jose H. Gomez of Los Angeles greeted the relatively small, socially distanced gathering that had come to witness the ordination of eight men to the priesthood Aug. 8.

It was clear by the time Archbishop Gomez stood before what were mostly the families of the ordinandi, that the "here" he spoke of was not only the physical space -- outdoors in the cathedral's plaza -- but the particular moment in time. After all, there were an estimated 70,000 online users from all over the world following the liturgy via livestream.

Archbishop Gomez said the moment was "historic" since these would be the "first priests of the pandemic generation," a sentiment that elicited some uneasy chuckles.

New priests have always been sent out to meet the challenges of an uncertain world and this time, it seemed fitting they'd be sent out from a platform beset on all sides by freeway traffic, church bells and police helicopters, with those pandemic protocols thrown in. While it may have seemed chaotic at times, it also was reflective of the times, so much so that Samuel Mesa, father of new priest Michael Mesa, quipped, "The only thing missing was a protest march."

How they meet the challenge of the times will no doubt vary from priest to priest, with the eight, ranging in age from 31 to 58, bringing with them a diverse tangle of back stories.

Father Mesa came to the priesthood via science, Father Thomas Park is an immigrant who dreamed all of his life of becoming an engineer. Father Filberto Cortez searched the world over only to find what was intended for him, eventually finding it back home in Southern California, while Father Louie Reyes spoke of getting sucked into a culture of "party and craziness" before finding his way.

Father Jonathan Nestico's father, David, said he knew his son was destined for this before his son did: "I knew when he was 8 or 10. It took him a little longer; I just kind of let it happen," he told Angelus, the online news platform of the Los Angeles Archdiocese.

Archbishop Gomez said the moment was “historic” since these would be the “first priests of the pandemic generation.”

Likewise, people had told Father Danny Garcia, "I see Jesus in you," causing him to wonder why he didn't. Father Justin Oh admits to clearly hearing God's call, reacting with "some inappropriate words," before telling the Almighty, "I think you're just tripping."

And Father Manuel Ramos? He said he spent decades "running from my vocation," making up for it on ordination day by practically running to it as he bounded toward the altar during the opening procession.

Now, they stood before their archbishop, whose homily was less a sermon and more a practical discourse you'd expect from a man who's been on the job a while.

Archbishop Gomez, who was ordained a priest in 1978, assured them they would play an important role in the healing of those who are hopeless and ignored and living on the "existential peripheries." He said that humility is the secret strength of the priesthood because "every priest is a sinner called to service," and he urged them to "Live for the Mass; live from the Mass," and summed up by encouraging them to "always do holy things in a holy way."

The rite of ordination that followed featured some modifications as a result of the pandemic. The laying on of hands by Archbishop Gomez was followed by a shot of hand-sanitizer after each blessing. When the men prostrated themselves before their fellow priests, the congregation and God -- that most visually arresting moment of any ordination that speaks of supreme surrender -- they did so lying face down on the hard concrete of the cathedral plaza.

The laying on of hands by Archbishop Gomez was followed by a shot of hand-sanitizer after each blessing.

Then the men were sent into those assembled to give their families their first blessings as priests. Some, like Father Mesa's family, reacted with wide grins and joyful laughter. Others, like Father Nestico's family, were so overcome by emotion that they fell into one another with an intense embrace.

Asked what he was feeling during the embrace, David Nestico shook his head, "You mean, besides pride? The good kind of pride. I don't know, I can't explain it. That was emotion, and you're talking to an engineer."

As the Mass drew to its end, Archbishop Gomez again pronounced the day "just perfect," noting that it had been blessed. "We have bells ringing, we have helicopters and noise from the freeway."

He then sent them out to their parishes -- they'll take up their official duties at the beginning of September -- with the words of every CEO or parent: "I'm looking forward to you starting working!"

Afterward, meeting with his family, Father Mesa, whose first assignment will be Holy Family Church in Glendale, acknowledged the long struggle to make it to this day, the uncertainty, and many delays, so many unknowns.

He was happy with how things turned out -- that was clear in his beaming smile -- and believed that given the state of things, it was not only appropriate, but "right" that the ordination take place outside in the middle of it all, in the middle of everything they would be heading into.

"Everything about the world we're going (to serve) is a bit different and unique, so why not start off that way?"

And why not here?

Provide feedback on this article
Join the conversation: Login or create an account
Before you can comment, you need to update your profile to include your first and last name, as required in our comments policy. Then reload this page and you'll be set up for commenting. Update your profile
Advertisement
More: US Church / Sacraments