Lebanon’s Catholic leaders are asking for help. Here’s where you can donate. 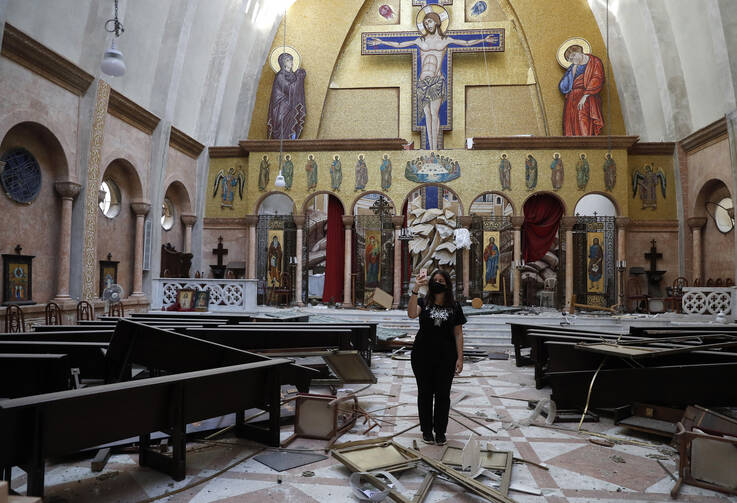 A woman takes pictures by her mobile phone for a damaged church, after an explosion hit the seaport of Beirut, Lebanon, Wednesday, Aug. 5, 2020. (AP Photo/Hussein Malla)

BEIRUT (CNS) -- As Lebanon's Catholic leaders appealed for help for their country, international and U.S. organizations appealed for donations for Beirut, capital of a country already suffering from a severe economic downturn.

"The church, which has set up a relief network throughout Lebanese territory, now finds itself faced with a new great duty, which it is incapable of assuming on its own," said Cardinal Bechara Rai, Maronite patriarch. He called for a U.N.-controlled fund to be set up to manage aid for the reconstruction of Beirut and other international assistance to aid the stricken country.

In Lebanon, Maronite Catholics are the largest Christian group. In the United States, two Maronite bishops noted that the explosions, which left more than 130 people dead and more than 300,000 homeless, "turned Beirut into an apocalyptic city. Hospitals, schools, houses, businesses, and much more (are) destroyed, leaving people feeling hopeless and helpless."

"We ask for your support for our brothers and sisters at this difficult time and in response to this catastrophe," said the statement, signed by Bishops Gregory Mansour of the Eparchy of St. Maron of Brooklyn and A. Elias Zaidan of the Eparchy of Our Lady of Lebanon of Los Angeles.

"We urge you to pray for Lebanon, and we ask for your support for our brothers and sisters at this difficult time and in response to this catastrophe. We appeal to all nations, all people of goodwill, to stand in solidarity with the Lebanese. We hope and pray Lebanon will regain stability and initiate a path of recovery toward peace and justice for all."

“We urge you to pray for Lebanon, and we ask for your support for our brothers and sisters at this difficult time and in response to this catastrophe.”

In Beirut, Syriac Catholic Patriarch Ignace Joseph III Younan appealed to all people of good will: "Here is Beirut, crying out for help!" He said all Syriac parishes would use everything at their disposal to help.

"We value all relief, aid and assistance provided to those affected, especially for Beirut residents and its suburbs," he said, also appealing for prayers and referring to the victims as martyrs.

In a statement from the Melkite Catholic Patriarchate in Damascus, Patriarch Joseph Absi also referred to those who died as martyrs.

"The time now is not for the sharing of responsibilities nor for disputes, but for the tireless work to reduce the repercussions of the national catastrophe and to ... reject differences and work together to avoid the worst," he said.

Here are some Catholic agencies where you can donate to help the citizens of Lebanon:

Aid to the Church in Need, a pontifical foundation: https://www.churchinneed.org/beirut-acn-offers-emergency-food-aid/