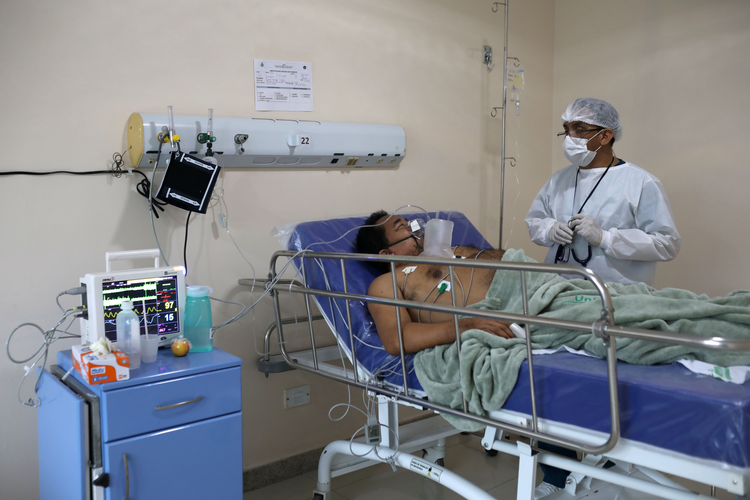 A doctor gives medical attention to an indigenous man in early June at Hospital Nilton Lins in Manaus, Brazil, which is exclusively for indigenous people being treated for COVID-19. Brazilian Bishop Vital Corbellini of Maraba expressed his gratitude to Pope Francis after receiving a much-needed respirator and temperature gauge at another hospital treating indigenous coronavirus patients. (CNS photo/Bruno Kelly, Reuters)

The diocese said the respirator, delivered to the Campanha de Maraba Hospital July 12 by the apostolic nunciature in Brazil, was one of four sent by the pope to Brazil, which has the second-highest number of coronavirus cases in the world.

"We thank the pope and the nuncio with all our hearts. We hope these supplies will help many people to save their lives," Bishop Corbellini said in a video posted July 13 on the diocesan website.

The supplies, he said in a statement released by the diocese, are greatly needed at the hospital, which has a separate wing that treats indigenous men, women and children.

"We know the affection that Pope Francis has for the Amazon, especially because -- in this pandemic -- the indigenous peoples are the most vulnerable," he said.

In an interview with Vatican News July 13, Bishop Corbellini said the donation "was a beautiful charitable action of Pope Francis through the apostolic nunciature."

"We ask that it be used especially for the indigenous peoples because they are the most in need," he said.

According to Worldometer, a statistical site monitoring the pandemic, as of July 15, there were an estimated 1.9 million people infected by COVID-19 in Brazil, resulting in the deaths of more than 74,000 people.

Despite the vulnerability indigenous communities face amid the pandemic, Brazilian President Jair Bolsonaro vetoed a law July 8 that would have provided them with supplies and hospital beds.

However, following a petition filed with the Brazilian Supreme Court by an indigenous rights group, a judge ruled that the government "must adopt a series of measures to contain the contagion and mortality of COVID-19 among the indigenous population."