A world united by economic devastation: The view from 1931 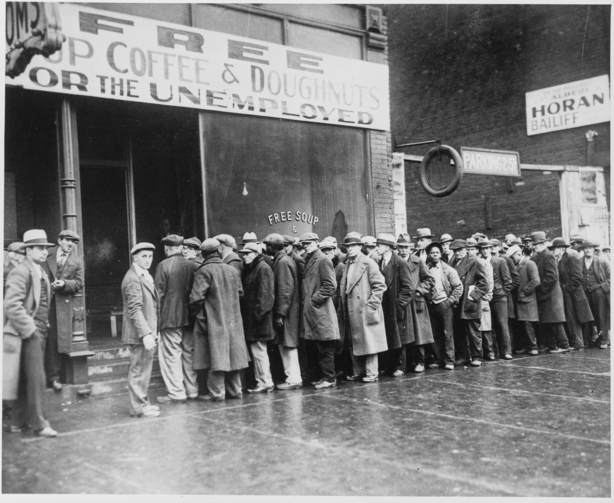 Editors' Note: In this article from the Dec. 5, 1931, issue of America, J. Desmond Gleeson laments the economic devastation of the Great Depression, noting that it came about without warning and destroyed what should have been an era of peace, prosperity and tranquillity.

The world has been struck by an economic blizzard. That, at least, is as near as I can get to an explanation of the present commercial chaos, and when the experts and economists try to explain it, they say approximately the same thing, only they do not put it so clearly. As to where the blizzard came from, why it arrived at the time it did and in all countries at the same time, when it is likely to be over, if ever it is over—these, and the like questions, are without adequate answers.

That the blizzard was unexpected goes without saying. If it had been expected, some preparation would have been made to meet it. No such preparation was, in fact, made. Having arrived, therefore, we none of us know what to do with it, or for how long we must treat it as a guest. It is certainly strange to find it so impartial and to fall on all nations equally and for (apparently) contradictory reasons. It is no respecter of tariffs and makes nothing of Free Trade. It blows with the same hostility upon England that was in the War, and Spain that was able to keep outside it. It is equally ruthless with America that won the War and with Germany that lost it.

The sudden change that came over the world hurt very badly, for it hit in the weakest place. It hit in the pocket.

The world that this blizzard struck was undoubtedly a happy world. Maybe, before its coming, everybody did not know he was happy, but that was merely because he was too happy to stop to think about it. There is not a depressed being today who would not dive straight back to those prosperous and secure “pre-depression days,” if he had the chance. Those were indeed the days. Production was speeding up beyond the dreams of avarice, wages were not only rising, but were actually being paid, and (mirabile dictu) consumers were actually consuming—or so it seemed. The world, in fact, after its long, involved story of wars and religions, party disputes and petty squabbles, microscopic efforts and colossal failures, was at last settling down to an era of financial prosperity and industrial, or commercial, greatness.

The sudden change that came over the world hurt very badly, for it hit in the weakest place. It hit in the pocket, and we had been rather cultivating pockets before that date. But quite apart from the economic aspect of the case, there are a number of other ways in which this depression is deeply annoying. It is a serious blow to our pride, for instance. We really were rather proud of ourselves—up to a point. We thought we had started something good when we started our big machines going. We had got something there which our ancestors did not possess, did not know about, in fact, except in so far as they could foresee a mechanized future. And just as we were getting into our stride, just as we were beginning to do something big and make our presence felt in the world, the machine jammed.

The big business men, who were nominally in charge of affairs, could see no more clearly what was happening. I say “who were nominally in charge of affairs,” for today it is by no means certain at which point they were in charge of affairs and at which point affairs took charge of them. At any rate, in their own sphere they were planning the limits of production on the assumption that there were no limits to the possibility of production. They were entirely carried away with the idea of expansion, of making more and more, of turning out articles in greater and greater abundance. That was their key move: quantity. Now, if one had a clear idea as to what were the limits of the potentiality of mere quantity, one could, perhaps, roughly calculate what quantity would be required. But the master minds had no such idea. They built their industries as if they were called upon to stock, not the world, but the starry universe; as if they could place successful salesmen on the Milky Way, and dump their mass-produced articles inside the rim of the Moon.

But the second part of the problem was left untouched, or, at least, was very inadequately considered. Supply was O.K. Never in the history of the world was supply so rich, so full, so sure, or so ready. All things came to those who waited, and they did not have to wait long before the salesman came upon them. They could have everything they desired. Indeed, even their desires were formulated for them in advance, and before they could desire what it was they were expected to desire.

At the same time that manufacturers were increasing the output of goods, human families were being restricted.

But there was no adequate machinery for making people want what the makers of goods wanted them to want.

At the same time that manufacturers were increasing the output of goods, human families were being restricted. Manufacture was uncontrolled, while families were birth-controlled. While they were increasing the quantity of goods, they were decreasing the number of persons who were likely to buy those goods. Production was to go up, while population was to go down. There was something quaint about all this, though no one seemed to find it strange at the time. Many were called when, within the limits of reason, only a few would be in the least likely to choose.

Since there is a depression in all places at the same time, it is possible that it will exhaust itself the more quickly than if it had been only in one place at one time and in another at the next.

Since there is a depression in all places at the same time, it is possible that it will exhaust itself the more quickly than if it had been only in one place at one time and in another at the next. Meanwhile, the best we can do is to get a kick out of depression and be proud of its size. Never in the world’s history has depression been on this vast scale. Let us boast of our losses as we once boasted of our gains. Let us brag about the number of cars we have not made today, of the dollars that have not gone our way, of the shares we have sold. In this way depression may grow suddenly sick of us and fly away to another planet.

An economic blizzard, as I say, caught the world and knocked it sideways. There were no hints as to its coming, or at least, no hints were taken. The wise men missed the signs, but I think nevertheless that there were a few signs to be seen. From the “Rerum Novarum,” for example, a document unknown to economists and big business men, might have been glimpsed a suggestion of the calamity likely to befall a world where fundamentals were largely forgotten and where primary and secondary things were cheerfully mixed up by people who were unable to distinguish between them. Meanwhile, something has been attempted and someone—that is, all of us—has been done.

J. Desmond Gleeson was a frequent contributor to America in the 1930s.