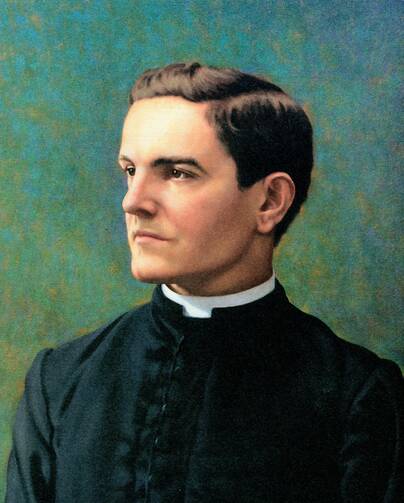 Father Michael McGivney, founder of the Knights of Columbus and a native of Waterbury, Conn., in an undated photo. (CNS file photo)

Pope Francis opened the way to the beatification of the Venerable Michael McGivney, an American diocesan priest and founder of the Knights of Columbus, by recognizing a miracle due to his intercession. Father McGivney was one of the 12 holy men and women named in the decrees for beatification or canonization that Pope Francis authorized to be promulgated at a meeting with the prefect of the Congregation for Saints, Cardinal Angelo Becciu, on May 26.

During the Covid-19 pandemic, previously scheduled beatification Masses have been postponed. For beatification, the Vatican requires proof of a miracle attributed to the candidate's intercession, unless the candidate was martyred for his or her faith.

“Father McGivney has inspired generations of Catholic men to roll up their sleeves and put their faith into action,” said Supreme Knight Carl A. Anderson. “He was decades ahead of his time in giving the laity an important role within the church. Today, his spirit continues to shape the extraordinary charitable work of Knights as they continue to serve those on the margins of society as he served widows and orphans in the 1880s.”

According to a statement released by the Knights of Columbus, “The miracle recognized as coming through Father McGivney’s intercession involved an unborn child in the United States who in 2015 was healed in utero of a life-threatening condition after prayers by his family to Father McGivney.”

“Father McGivney has inspired generations of Catholic men to roll up their sleeves and put their faith into action,” said Supreme Knight Carl A. Anderson.

Meeting with the board of directors of the Knights of Columbus in early February, the statement noted, Pope Francis said the organization has been faithful “to the vision of your founder, Venerable Michael McGivney, who was inspired by the principles of Christian charity and fraternity to assist those most in need.”

Three of those named will be canonized by the pope later this year if conditions created by the coronavirus pandemic permit it; the other nine, including seven whose martyrdoms were recognized, will be declared blessed, almost certainly in their home dioceses.

The three who will now be canonized are:

The nine who will be beatified include seven martyrs, six of them Cistercian monks and one Franciscan friar:

Declared blessed with Father McGivney was a French woman, the Venerable Pauline Maria Jaricot, who was born in Lyon in 1799. She devoted her life to assisting the work of missionaries and encouraging Catholics to involve themselves in the work of spreading the Gospel. With this goal in mind, she founded the Society for the Propagation of the Faith, dedicated to helping missionary efforts worldwide, and the Living Rosary Association, whose associates are committed to saying a decade of the Rosary each day. In 1835 she was healed of a serious illness after visiting the shrine of St. Philomena in Italy. She died in France in 1862.

Pope Francis recalled her work in his recent message to the Pontifical Mission Societies.

Father McGivney was born Aug. 12, 1852, the eldest of 13 children born to Patrick and Mary Lynch McGivney in Waterbury, Conn. Emigrating from separate towns in Ireland’s County Cavan, the couple met and married in the United States. Only seven of their children lived past childhood.

Young Michael attended school in Waterbury’s working-class neighborhood, but he left school at 13 to work in the spoon-making department of a brass factory.

Pope Francis: ‘I share the impatience’ to bring about Christian unity
Gerard O’Connell

At 16, he left the factory to begin seminary studies at the French-run College of St. Hyacinthe in Quebec. He also studied at Our Lady of Angels Seminary, attached to Niagara University in Niagara Falls, N.Y., and at the Jesuit-run St. Mary’s College in Montreal.

He went home to Waterbury when his father died in 1873 and stayed there for a time out of concern for his family and because he lacked funds. At the request of Hartford’s bishop, he enrolled in St. Mary's Seminary in Baltimore, where he completed his priestly studies.

In 1877, he was ordained in Baltimore by Archbishop James Gibbons for the then-diocese of Hartford. A few days after his ordination, he said his first Mass in the presence of his widowed mother at Immaculate Conception Church in Waterbury.

Father McGivney served as an assistant pastor at St. Mary’s Parish in New Haven, from 1877 to 1884. He founded the Knights of Columbus with a small group of Catholic laymen in order to strengthen religious faith and to help families overwhelmed by the illness or death of their breadwinners.

In 1884, he was named pastor of St. Thomas Church in Thomaston, a factory town about 10 miles from Waterbury. He fell ill during an influenza epidemic and died on Aug. 14, 1890, probably from complications of pneumonia and tuberculosis.

With reporting from the Catholic News Service