Pope Francis: ‘I share the impatience’ to bring about Christian unity 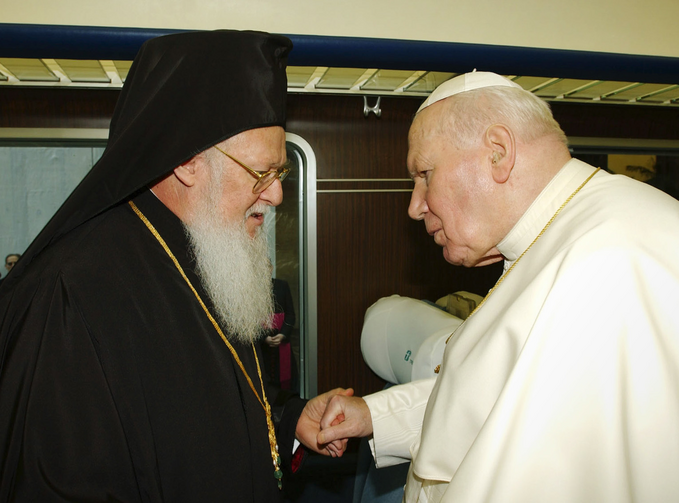 St. John Paul II greets Ecumenical Patriarch Bartholomew in 2002. Marking the 25th anniversary of St. John Paul II's encyclical on Christian unity, Pope Francis said he shares "the healthy impatience" of those who think more can and should be done, but he also insisted that Christians must be grateful for the progress made. (CNS photo/Reuters)

Pope Francis marked the 25th anniversary of St. John Paul II’s encyclical on Christian unity—“Ut Unum Sint” (“That all may be one”)—by reaffirming the church’s “irrevocable” commitment to work for unity among the world’s roughly 2.3 billion Christians. “I too share the healthy impatience of those who sometimes think that we can and should do more,” he said.

“On the path that leads to full communion, it is important to keep in mind the progress already made, but equally important to scan the horizon and ask, with the Encyclical Ut Unum Sint, ‘How much further do we have to travel’ (no. 77),” he said in a letter to the president of the Pontifical Council for Promoting Christian Unity, the Swiss cardinal Kurt Koch.

“One thing is certain,” the pope wrote. “Unity is not chiefly the result of our activity, but a gift of the Holy Spirit. Yet, unity will not come about as a miracle at the very end. Rather, unity comes about in journeying; the Holy Spirit does this on the journey.”

“One thing is certain,” Pope Francis writes. “Unity is not chiefly the result of our activity, but a gift of the Holy Spirit. Yet, unity will not come about as a miracle at the very end. Rather, unity comes about in journeying.”

He recalled that John Paul II wrote the encyclical with a view to the third millennium and mindful of the prayer of Jesus at the Last Supper “that all may be one.” In it, he confirmed the “irrevocable” commitment made by the Catholic Church at the Second Vatican Council (1962-65) in the groundbreaking document on “The Restoration of Unity” (“Unitatis Redintegratio”), which the council fathers endorsed with a vote of 2,137 in favor, 11 against. It was subsequently promulgated by Pope Paul VI on Nov. 21, 1964.

Francis recalled that the Second Vatican Council “recognized that the movement for the restoration of unity among all Christians arose by the grace of the Holy Spirit,” and it taught that the Spirit, while “distributing various kinds of spiritual gifts and ministries,” is “the principle of the Church’s unity.” He said the encyclical reaffirmed that “legitimate diversity is in no way opposed to the Church’s unity, but rather enhances her splendour and contributes greatly to the fulfilment of her mission.”

In his letter, Pope Francis did not mention a key passage in that encyclical that at the time of its publication drew much attention—the Polish pope’s invitation to other church leaders and theologians to engage with him in a patient and fraternal dialogue “to find a way of exercising the primacy which, while in no way renouncing what is essential to its mission, is nonetheless open to a new situation.”

One of the very few to respond to that invitation was John Raphael Quinn, the emeritus archbishop of San Francisco and former president of the U.S. bishops’ conference, who wrote a book based on a lecture he gave at Campion Hall, Oxford, titled The Reform of the Papacy: The Costly Call to Christian Unity in 1999. He gave a copy to John Paul II and Cardinal Joseph Ratzinger, and when he was archbishop of Buenos Aires, Jorge Mario Bergoglio, the future pope, also read this book.

In his programmatic document “The Joy of the Gospel,” released not long after becoming pope, Francis emphasized the need for a conversion of the papacy. And in his exercise of the Petrine ministry over the past seven years he has gone a long way to reshaping the papacy through a more collegial and synodal style that has been well received by the other Christian church leaders as a further step on the road to unity.

In his letter for the anniversary of the encyclical, Pope Francis urged all believers to “give thanks to the Lord for the journey he has allowed us to travel as Christians in quest of full communion.”

Aware that many had hoped for more progress on unity, he reminded them: “We should not be lacking in faith and gratitude: many steps have been taken in these decades to heal the wounds of centuries and millennia. Mutual knowledge and esteem have grown and helped to overcome deeply rooted prejudices. Theological dialogue and the dialogue of charity have developed, as well as various forms of cooperation in the dialogue of life, at both the pastoral and cultural level.”

He prayed that, together with the heads of the different churches and Christian communities, “may we, like the disciples of Emmaus, experience the presence of the risen Christ who walks at our side and explains the Scriptures to us. May we recognize him in the breaking of the bread, as we await the day when we shall share the Eucharistic table together.”

Pope Francis thanked the pontifical council for its effort over more than half a century to foster this quest for unity, and he welcomed, in particular, two of its recent initiatives: to publish in the fall an Ecumenical Vademecum for Bishops “as an encouragement and guide for the exercise of their ecumenical responsibilities,” and to launch the journal Acta Œcumenica, “which, by renewing the Dicastery’s Information Service, is meant to assist all who work in the service of unity.”

He encouraged all Christians “to ask the Holy Spirit to guide our steps and to enable everyone to hear the call to work for the cause of ecumenism with renewed vigor,” and he prayed “may the Spirit inspire new prophetic gestures and strengthen fraternal charity among all Christ’s disciples” so “that the world may believe.”