Dr. Anthony Fauci to Jesuit grads: ‘Now is the time for us to care selflessly about one another’ 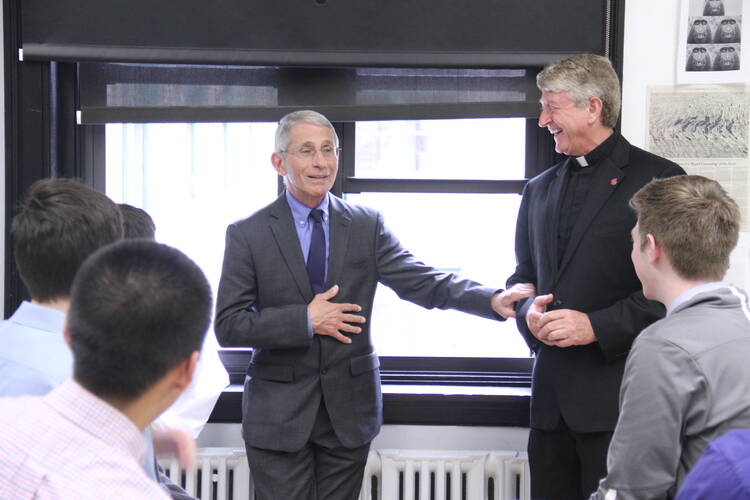 In a pre-recorded video message distributed earlier this week, Dr. Anthony Fauci, M.D., the director of the National Institute of Allergy and Infectious Diseases at the National Institutes of Health and a leading figure in the struggle to contain the coronavirus pandemic, addressed the graduating classes of 2020 at Jesuit secondary schools around the country.

Dr. Fauci testified via video before the Senate Committee on Health, Education, Labor and Pensionson Tuesday. He is observing a “modified quarantine” after coming into contact with a White House staffer who tested positive for the coronavirus.

“Currently our lives have been upended by a truly historic global pandemic. I am profoundly aware that graduating during this time—and virtually, without your friends, classmates and teachers close by—is extremely difficult,” Dr. Fauci said. “However, please hang in there. We need you to be smart, strong and resilient. With discipline and empathy, we will all get through this together.”

"With discipline and empathy, we will all get through this together.”

The video originated with a request from Daniel Lahart, S.J., president of Regis High School in New York, Dr. Fauci’s alma mater, that Dr. Fauci record a short address to the school’s graduating class. “Like most schools, we won’t be gathering in June for our usual graduation exercises,” Father Lahart told America. “As a staff, we have talked a great deal about how to mark our graduation day as special. Another Zoom just doesn’t do it.”

After another Jesuit, Jeff Johnson, S.J., president of Strake Jesuit College Preparatory in Houston (where Father Lahart was previously president), mentioned that he had a similar idea, Father Lahart contacted Dr. Fauci’s office and asked if he could do a second video that was not specific to Regis, and that could be shared with other Jesuit high schools. “It was an audacious ask of someone who is incredibly busy, and concerned with worldwide health,” Father Lahart commented. “But he speaks so easily about what his Jesuit education means to him, so I presumed it wouldn’t take him long to film either one.”

“Every Jesuit graduate can take pride in knowing that they are part of an educational system that is nearly five centuries old, and has impacted the lives or so many people around the world,” Father Lahart continued. “Today, we also can all take pride that the man who is probably the most trusted person in the United States is a graduate of a Jesuit high school and a Jesuit college. He takes great pride in his Jesuit education, and as he proudly professes, it has formed his life and his career.”

Daniel Lahart, S.J.: "We can all take pride that the man who is probably the most trusted person in the United States is a graduate of a Jesuit high school and a Jesuit college."

Dr. Fauci was born in the Bensonhurst section of Brooklyn in 1940 and graduated from Regis High School in 1958. Applicants to the all-male Jesuit school were expected to be among the top students in their graduating class and took a rigorous entrance exam. Enrollment was kept at 140 students per class year. The school was founded in 1914 with a substantial financial gift from Julia M. Grant, the widow of New York City Mayor Hugh J. Grant. Terms of the endowment included that the school charge its students no tuition, a policy still in place today.

“I often say it was the best educational experience I could have imagined,” Dr. Fauci noted in his speech. “I became immersed in the intellectual rigor of a Jesuit education.”

Tom McCorry, a classmate of Dr. Fauci who also played with him on the Regis basketball team (Dr. Fauci was team captain in 1958) and later went on to become a college basketball coach, told America that Regis “was a very high-end academic school, just as Jesuit education in general is very high-end. We took four years of Latin, four years of Greek and a couple of years or French or German. It was quite a school, but Tony [Fauci] stood out in a number of ways.”

“He was very astute, quiet but a leader,” Mr. McCorry remembered. “He still shows it now. When all these things get thrown at him [during White House press briefings], you don’t see him losing his temper. You see him give measured answers based on the facts.”

Dr. Fauci credited his education at Regis High School with teaching him both “precision of thought and economy of expression.”

Dr. Fauci graduated from The College of the Holy Cross in 1962, and received his medical doctorate from the Weill Medical College of Cornell University in 1966. He has served under six U.S. presidents, starting with Ronald Reagan in 1984. He noted in a 2019 visit to Regis that he was able to work under different presidential administrations because “I am almost completely apolitical.” Widely considered the top infectious disease expert in the United States, Dr. Fauci has worked on the federal response to AIDS, Zika, anthrax and Ebola, and is currently a member of the White House coronavirus task force. In 2008, Dr. Fauci was awarded the Presidential Medal of Freedom.

Dr. Fauci credited his education at Regis with teaching him both “precision of thought and economy of expression,” commenting that those two habits “inform how I think, how I write and how I communicate with the public every day, especially during the present unsettling times. Just as important, however, is the Jesuit emphasis on social justice and service to others. And now is the time, if ever there was one, for us to care selflessly about one another.”