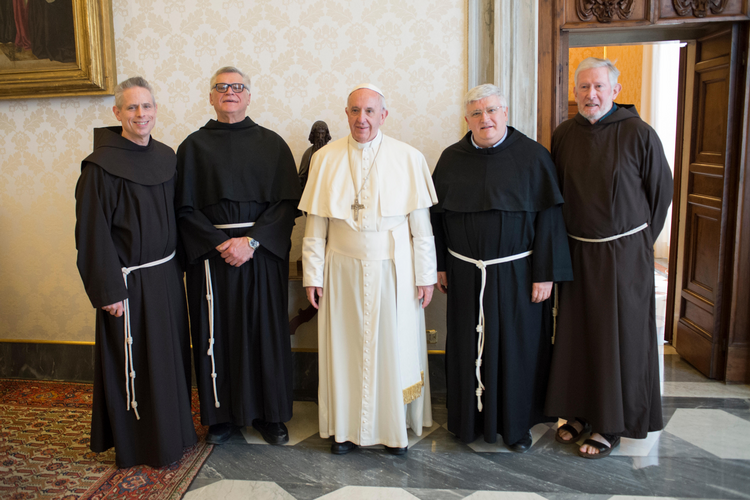 Pope Francis poses with the superiors of the four main men’s branches of the Franciscan family during a meeting at the Vatican in April 2017. The Rev. Marco Tasca, who was just appointed archbishop of Genoa on May 8, is second from the right. (CNS photo/L'Osservatore Romano)

In yet another surprise appointment, Pope Francis has appointed the Rev. Marco Tasca, 62, a member of the Franciscan Order of Friars Minor Conventual and former minister general of that order for 12 years, as the new archbishop of Genoa, in northwest Italy.

The Vatican announced the appointment on May 8. He succeeds Cardinal Angelo Bagnasco, 77, former president of the Italian Bishops Conference (2007-2017), whose resignation the pope accepted today. The cardinal has been president of the Council of Bishops’ Conferences of Europe since 2016 and will continue in that role.

The Rev. Marco Tasca, 62, a member of the Franciscan Order of Friars Minor Conventual, was minister general of that order for 12 years.

“I am a friar and I remain a friar,” the new archbishop elect told his fellow Franciscans when his appointment was announced at the friary in Padova yesterday. His fellow Franciscans responded with prolonged applause. He is the second Franciscan to become archbishop of Genoa; the first was 700 years ago when Porchetto Spinola served as head of the diocese from 1299-1321.

The archbishop-elect greeted his new diocese, which includes 674,000 faithful and 278 priests, with the words of St. Francis of Assisi: “May the Lord give you peace.” He promised to be “a father and a brother” to the people of Genoa, and said he comes to his new diocese “with a heart always open to listening and to welcoming all those who knock at my door, including—and I wish to say, especially—those who, for whatever reason, have found themselves or feel far from our ecclesial community.”

Born in Sant’Angelo di Piove di Sacco, a comune in the Province of Padua in the Italian region Veneto, on June 6, 1957, Father Tasca entered the order of Friar Minors Conventuals at the age of 11 and, after completing his studies and novitiate, he took his final vows in the Basilica of St. Anthony of Padua in 1981. After studying philosophy and theology, he was ordained priest in 1983, and then went on to study and gain a degree in psychology and pastoral ministry at the Pontifical Salesian University in Rome in 1988.

“I am a friar and I remain a friar,” the new archbishop elect told his fellow Franciscans.

In the following years he worked in a parish and then served as rector of the Franciscan minor and later junior seminaries in Padua, where he also taught. After serving as minister provincial of the province of St. Anthony of Padua from 2005-2007, he was elected as minister general of the order and 119th successor of St. Francis of Assisi in May 2007 and re-elected for a second six-year term in January 2013.

He was elected as one of ten members of the Union of Superiors General to participate in three different synods of bishops: on the new Evangelization (2012), on the family (2015) and on youth (2018)

Pope Francis got to know him during those last two synods, and also as minister general of his order, but his decision to appoint him to the important see of Genoa surprised many in the Italian church. “No one would have imagined this choice,” a close observer of the Italian church, who welcomed the nomination but requested anonymity because of the role he holds, told America.

At the same time, it is worth recalling that the first Latin-American pope has a personal attachment to Genoa and knows the archdiocese. He visited the city in May 2017 and, speaking to the workers, recalled “with emotion” that his father had departed from this seaport for Buenos Aires in the early 1900s.

Genoa is one of the more than 220 dioceses in Italy, and since his election as pope in 2013 Francis has appointed more than half of the bishops to these sees. In the cases of Bologna, Palermo, Rome, Milan and now Genoa, he has gone out of his way to choose men of prayer, men of dialogue and openness to people, not princes, culture warriors or ideologues.

Significantly, the pope has broken with the tradition that the appointment of a person to be bishop in some dioceses (including Genoa and Venice, for example) automatically meant he would become a cardinal. This no longer holds. Indeed, he has sought to reduce the number of Italian cardinals because they were over-represented in past conclaves.

So it is by no means automatic that the new-archbishop elect will be made cardinal. If Francis were to give the archbishop a red hat, it would be because he considers the man is particularly worthy, and not because of the see over which he presides, as was the case at the last consistory when he made Cardinal Matteo Zuppi of Bologna a cardinal.

Correction, May 9: The Rev. Marco Tasca was minister general of the Franciscan Order of Friars Minor Conventual, not the master general.

Provide feedback on this article
Join the conversation: Login or create an account
Before you can comment, you need to update your profile to include your first and last name, as required in our comments policy. Then reload this page and you'll be set up for commenting. Update your profile
Advertisement
More: Vatican / Europe