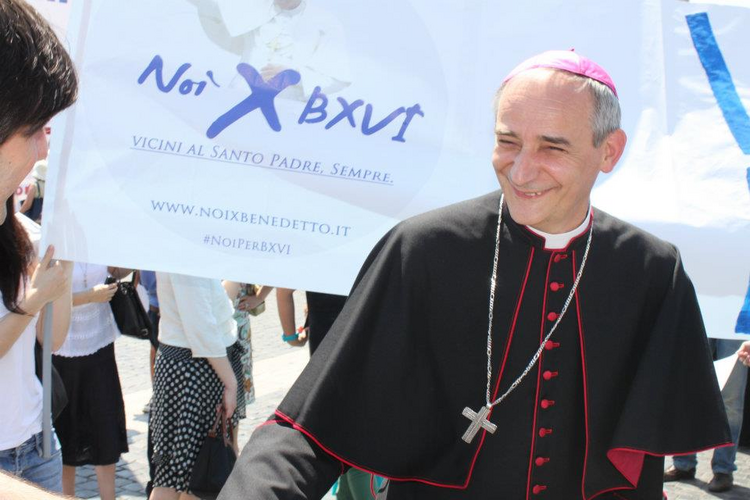 Pope Francis has again surprised and shaken up the Italian church by appointing as archbishops of Bologna and Palermo two pastors that have “the smell of the sheep.”

The two new archbishops are humble, prayerful men, known respectively for their work for the poor, the outcast and those in difficulty (Zuppi) and those trapped in prostitution and migrants (Lorefice). They are not careerists, and are known to be ever open to those in need.

Archbishop-elect Zuppi, 59, popularly known is Rome as “Don Matteo,” was the first priest to be ordained from the Sant’ Egidio community which he joined as a high school student. A very friendly and kind man, he is known and loved by the poor, the outcasts, the gypsies, the abandoned old people and young people across Rome; he has spent his life serving them. He holds degrees in theology from the Lateran University in Rome and in Philosophy and Letters from Rome University.

He served in Roman parishes for 29 years, and as assistant and then parish priest (2000-2010) at the church of Santa Maria in Trastevere (the first church to Mary in the Western world). During that time he played a key role in helping broker peace to end the civil war in Mozambique and he also worked to end conflicts in Burundi and other places. In 2010 he was assigned to a parish on the periphery of Rome marked by poverty, crime and drug abuse, and served there until 2012 when Pope Benedict XVI nominated him as one of the auxiliary bishops of Rome. Archbishop-elect Zuppi has always been close to the priests of the diocese, first as a priest and then during his three years ministry as bishop. He’s often seen riding a bike through the sometimes chaotic Roman traffic, and now he’s sure to find it easier to do that in Bologna.

The new archbishop of Palermo, Father Corrado Lorefice, 52, on the other hand, is not well known in Italy, though he has spent 25 years on the frontline in the fight against human trafficking, and in particular against prostitution in Sicily. He has also given much help and support to the migrants, many of whom are exploited, too, and will now be in a better position to do more on both fronts.

Ordained at the age of 24, he holds a doctorate in theology and taught moral theology for several years on the island, while also doing parochial work. Since 2010 he has served as parish priest until his appointment today.

Over the years Lorefice has written several books, included ones on Don Pino Pugliese, the priest assassinated by the Mafia in Palermo, and on the Second Vatican Council. Much loved by the priests and young people in the diocese of Noto, he now enters the archdiocese where Don Pugliese once worked and where the challenges are not lacking.

These latest two appointments are part of Pope Francis’ ongoing effort to reform the Italian church. Not long ago, in another surprise move, he chose a parish priest from Mantova, Father Claudio Cipolla, and appointed him to the diocese of Padova—the fourth largest in Italy. He began the reform at the end of 2013 by appointing a new Secretary General of the Italian Bishops Conference, Bishop Galantino. Then breaking with tradition and the career path in his first two consistories, Francis gave red hats to three bishops not in traditional cardinalatial sees, bypassing those expecting it in Venice and Turin. This reform is ongoing, like that in the Roman Curia.

Show Comments (
4
)
Comments are automatically closed two weeks after an article's initial publication. See our comments policy for more.
Brian McDonough
4 years 9 months ago
Regarding those Bishops who opposed Francis at the Synod, he has the numbers in his favor. Francis not only "holds the cards," he is the "House." Francis has appointed 32 Cardinals since February 22, 2014 or about 16 Cardinals a year. 18 of them are younger than 70, and 26 are younger than 80. Francis need only appoint 35 more Cardinals younger than 80 to have appointed 61 Cardinals younger than 80, and he will have appointed a majority of the 120 Cardinals younger than 80 who shall elect his successor. It is probable that Francis will reach that number over the next 3 years because 46 current Cardinals are over 85, and 22 of those are over 90. The probability that some of these Cardinals sadly may die over the next few years is relatively high, and Francis shall appoint their successors. Francis may also create new Cardinals in places where none existed because he already has done this 5 times. This Bishop of Rome also has been and shall continue to appoint Progressive Bishops and Archbishops [as the above article states that he just did with Fr. Zuppi in Bologna and Fr. Lorefice in Palermo], some of whom he shall elevate to Cardinals. Finally, if Francis is Pope another 5 years, then 46 of the current Cardinals, who were NOT appointed by Francis, shall be over 80 and unable to vote for a new Pope in 5 years. In 5 years, only 44 of the current Cardinals, who were NOT appointed by Francis, shall be younger than 80 and still be able to vote for Francis' successor; and many of them are Progressive because they voted for Francis as Pope. Therefore, Francis' successor shall be as Progressive as, or more Progressive than, Francis. It is written in the numbers. Francis not only "playa the game," he decides who "playa the game" that chooses his successor.
Ben Maddux
4 years 9 months ago
For the sake of a healthy balance, I hope that Pope Francis appoints not only progressives. I do not know for sure what Pope Francis personal thoughts are, but 'America Magazine' seems to imply that Francis views traditionalists as being intellectually closed to present-day realities. Truth as Jesus gave us witness to, was not just about Love and Mercy but was also about picking up your cross and warning us about the erroneous ways of the world which can lead to Hell. Certainly Hell is not a popular topic, yet I wonder if all the talk of Mercy and Love are glossing over the reality of Hell.
Bruce Snowden
4 years 9 months ago
Ben Maddux feels that perhaps Holy Father Francis’ accentuation of Mercy which is another word for Love, because God loves all that he creates, may lead to a “glossing over of the reality of Hell.” Ben, let me try to explain why your should not worry about that. Scripture assures that God’s Mercy “is above all his works” and Franciscan Speculative Theology if memory serves me right, applies the preeminence of Mercy even to the creation of Hell! Perhaps Bonaventure, maybe Scotus, or some great Franciscan theologian long past, held that after the Angelic rebellion caused by Divine revelation to the angelic choirs that the Second Person would become Man, assuming animal nature, far beneath angelic nature, a certain number of angels led by their greatest, named Lucifer meaning “bearer of light,” refused to bow down to a creature of a lower nature than theirs. Hatred of God consumed them and detestation of God was so gripping that God as an act of Mercy created Hell for them, because to remain in the presence of God after their rebellion would have been a profoundly more painful “Hell” for them than to be “cast out.” Humans have a way of expressing utter dislike for someone by saying, “I can’t stand the sight (or be in the presence of) that person!” When God said to the Fallen Angels, “Go to Hell!” He was, true to His Nature, being Mercifull! That out of mercy, God created Hell, makes perfect sense if it is true, that, “God’s Mercy is above all His works.” Thus it seems to me, rather than Pope Francis accenting God’s Mercy being a glossing over of the reality of Hell, it actually acknowledges the reality of Hell. Ben that's why you shouldn't worry about Hell's negation by Holy Father Francis' ministry of God's Mercy.
B Hagel
4 years 9 months ago
Yours is one of the best (and most simple) explanations I have yet heard. Thank you. I am a Scotus fan and was on my tip toes, breathless, when the Holy Father chose the name Pope Francis!
Advertisement