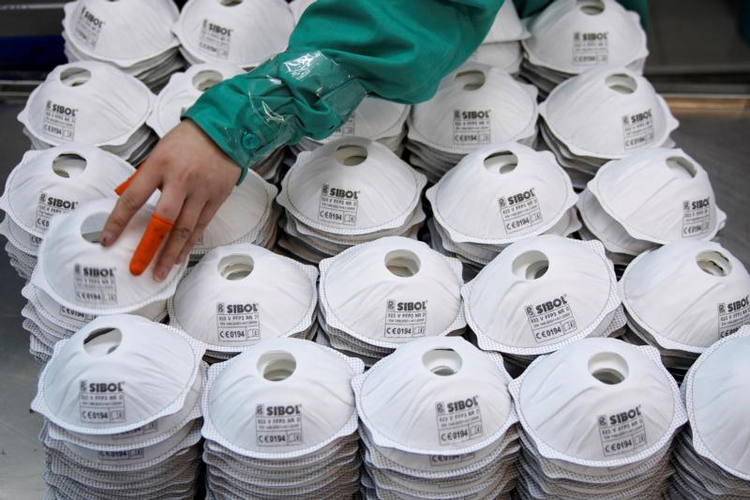 Protective masks on a production line at a factory in Shanghai. (CNS photo/Aly Song, Reuters)

The Holy See expressed its appreciation and gratitude to the Chinese Catholic bishops and faithful, as well as other Chinese institutions and citizens, on Holy Thursday for their “generous gesture” in sending medical supplies to the Vatican to assist in its effort to combat the Covid-19 pandemic.

The director of the Vatican press office, Matteo Bruni, told journalists on April 9 that the gifts should be seen “as an expression of the solidarity of the Chinese people and the Catholic communities [in the mainland] to all those who are committed in assisting people struck by the Covid-19 and in the prevention of the coronavirus epidemic that is underway.” The supplies were sent to the Vatican through the Red Cross Society of China and the Hebei Jinde Charities Foundation, a Chinese Catholic charity.

Matteo Bruni: “The Holy See appreciates this generous gesture and expresses its gratitude to the Catholic bishops and faithful.”

“The Holy See appreciates this generous gesture and expresses its gratitude to the Catholic bishops and faithful,” he wrote, “as well as to the Chinese institutions and all the other Chinese citizens for this humanitarian initiative, and it assured them of the esteem and prayers of the Holy Father.”

The Chinese gesture is seen as reciprocating the early donation by the Vatican at the end of January and early February, when it sent around 700,000 masks to aid the Chinese people suffering from Covid-19 in Wuhan in Hubei province, the early epicenter of the epidemic, and in East China’s provinces of Zhejiang and Fujian. It did so after Pope Francis on Jan. 26 expressed his closeness, concern and prayers for the Chinese victims of the virus.

The Chinese gesture is seen as reciprocating the early donation by the Vatican at the end of January and early February, when it sent around 700,000 masks to aid the Chinese people.

Since the signing of the landmark “provisional agreement” in Bejing on Sept. 22, 2018, regarding the nomination of Chinese bishops on the mainland, as well as the more recent meeting in Munich last February between China’s foreign minister and the Vatican’s Secretary for Relations with States, both the Vatican and the Chinese Catholic church have sought closer ties.

America has also learned that a group of Catholic laity in Shanghai raised money to support the Gemelli Hospital and different Catholic communities in Rome. Over a thousand Chinese contributed to the solidarity project, which provided approximately 50,000 sterile surgical masks, 25,000 gloves and 600 pairs of protective glasses for hospital staff at the Gemelli Hospital. They also sent more than 40,000 disposable masks to communities in different parts of the city.

A group of Catholics in Hong Kong also sent gifts of masks to the Pontifical Italian Foreign Missionaries (PIME) seminary in Monza, near Milan, where 57 students from a dozen countries have been living in isolation since the lockdown in Lombardy—the worst hit region of the country—more than a month ago. “We received many, many masks from generous friends in Hong Kong, and we are wearing them,” the dean of studies, the Rev. Gianni Criviller, who is living with the students, told America.