Praise, reverence and serve the God of coronavirus 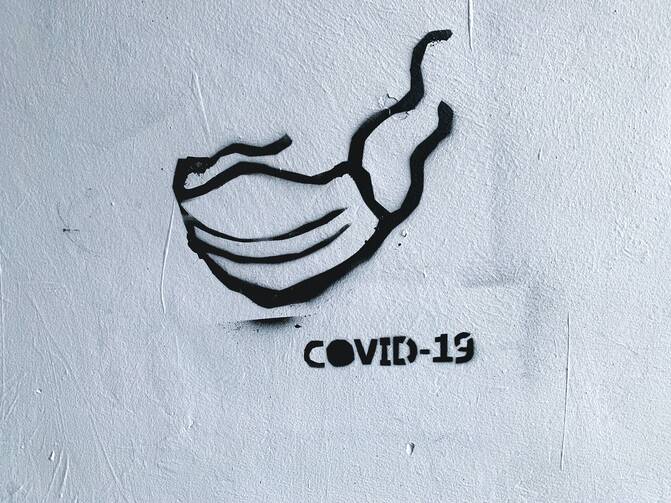 Photo by Adam Nieścioruk on Unsplash

If you are a kind and compulsively helpful Christian soul, it may be vexing not to be able to get out there and do something: visit the sick, feed the hungry, comfort the lonely. Even if you would gladly catch a disease so long as you can aid others, you are exhorted to keep the pandemic from spreading by staying indoors and leaving people be. It is like being told that to achieve eternal salvation, you must go rob a liquor store.

A Christian deemed “nonessential” has to hand things over to others—even secularists—to do the work of feeding, protecting, consoling, caring for. The police, the E.M.T.s, the doctors, the nurses, the outreach workers, whatever their religio-ethical framework for life, they are on the front lines of this crisis, not you. Men and women who may not even be aware of the radical personalism of Dorothy Day or the seamless garment of life are out there doing the work you want to be doing.

And you are left with the intense washing of your hands—17, 18, 19 seconds—as your most profound act of personal martyrdom. You are called to aid humanity not by trekking through the snowy Pyrenees to save a clutch of infected travelers but by moving through the world without letting your shadow fall upon another soul. Your great gift to the teeming masses is to wake up one morning and want to play volleyball and then not play volleyball.

Men and women who may not even be aware of the radical personalism of Dorothy Day or the seamless garment of life are out there doing the work you want to be doing.

For one who is absolutely sure of what God wants of you, this may be a time of exploding such certainty and rerouting yourself to where God is actually calling you.

When I was a novice in St. Paul, Minn., we were told about a Jesuit philosophy professor who, after taking time away to work with the Missionaries of Charity in Calcutta, told Mother Teresa that he wanted to stay there. How could he abandon the urgent work right in front of him with the poorest of the poor?

I don’t entirely know if this next part is true or if our novice master made it up so we wouldn’t feel guilty about growing up to become thin-bearded college professors secreted away from the world behind Socrates and Hans-Georg Gadamer. Either way, the story goes, Teresa told this Jesuit to go back to his university and instruct high-born Midwestern American children. Instead of picking up babies and spooning broth to the lonely dying, teach those undergrads to be compassionate and basically better human beings.

And so back he went. He thought his life was taking him one rather obvious way. But God led him to a surprisingly different way.

The heart of Jesuit spirituality, very condensed, is this: Our purpose in life is to praise, reverence and serve God and in this way save our souls. Engage with whatever helps you to worship and serve and save your soul. Detach from whatever takes you from worshiping and serving God and saving your soul.

The heart of Jesuit spirituality, very condensed, is this: Our purpose in life is to praise, reverence and serve God and in this way save our souls.

We hold ourselves at balance and live somewhere in between engaging and detaching. St. Ignatius Loyola calls this posture “indifference,” or not preferring one way over the other.

As he puts it, in syntax like a chemistry formula: “We ought not to seek health rather than sickness, wealth rather than poverty, honor rather than dishonor, a long life rather than a short one, and so on in all other matters. Rather, we ought to desire and choose only that which is more conducive to the end for which we are created.”

Figuring out what we desire and ought to choose is called discernment. We move to become indifferent enough in spirit and will both toward picking up babies in Calcutta and teaching the Phaedo in the United States. And then listen for which way God is calling us.

In these days, to defeat the coronavirus, our duty apparently is to become indifferent enough to follow the Lord’s call even in the most startling of places. Through the voice, for instance, of the nation’s vibrant new chastity speaker, New York Governor Andrew Cuomo. If you truly love someone, keep your hands off them, he tells us. It may go against all your instincts, but show your respect to your beloved by staying away. Wait, wait, wait.

You are called to become obedient enough to praise, reverence and serve the God who invites you to do seemingly very little. The God who himself apparently does nothing as the disease spreads.

You may feel compelled to travel around the city handing out food to men and women sleeping under bridges, but the best you can do may be to pledge donations, pray or improvise a creative, remote way to serve.

If that kind of utilitarian philosophy is your own, it might be worth considering the life of Christ. He did not spend his time on earth doing as much good as he could for as many people as he could for as long as he could. At times he stayed hidden, stole away into the crowd, went off to pray on the mountainside, celebrated with his friends. He blew apart common notions of what it is to be a prophet, a good man, a messiah. Instead of a long and full life dashing around helping people, fixing all problems hither and yon, he let himself be taken down at age 33. Jesus scorned being effective for being obedient.

Again, as Ignatius might put it, you are called to become obedient enough to praise, reverence and serve God anywhere, at any time. To praise even the God who invites you to do seemingly very little. The God who himself apparently does nothing as the disease spreads, who lets the nonnas die alone all throughout Bergamo, Fibbio, Naples, Codogno, their bodies spilled into the hallways, piled up in the morgues, and the same beginning in the United States. You are called to find even that God and to worship that God.

If that makes no sense, perhaps all the better. When everything is stripped away, the world is coming apart, all sense has fallen like ash from a fire and you cannot hide even behind your usual veil of charity and goodness, you have to confront yourself as you really are—powerless. And so, maybe for the first time, rely on God and God alone. So begins a truer service and begins the saving of your soul.