Pope Francis does not have Covid-19 but a sixth Vatican employee has tested positive, spokesman says 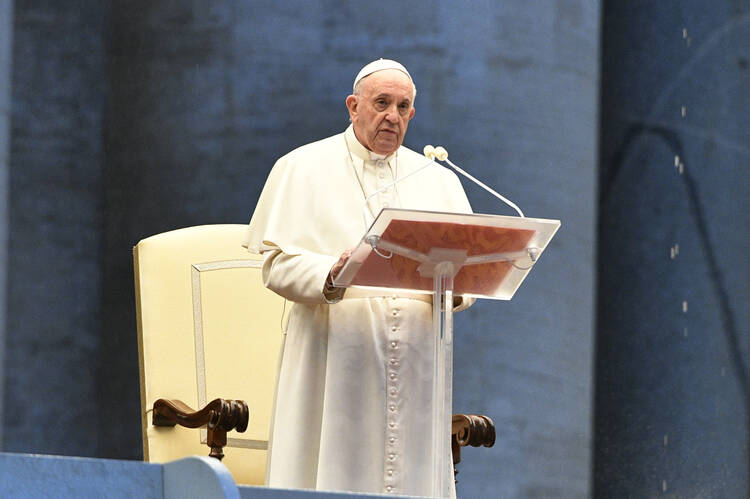 The Vatican spokesman today confirmed that Pope Francis and his closest collaborators do not have Covid-19, but a sixth employee in the city-state has tested positive, following tests carried out “on more than 170 employees of the Holy See and residents at the Santa Marta guesthouse,” where Pope Francis lives.

The news came in a statement from the director of the Holy See Press Office, Matteo Bruni, sent to journalists accredited to the Holy See just before 5 p.m. (Rome time) on March 28.

The Vatican spokesman also confirmed the news, published by America and some Italian media on March 25, that “an official of the Secretariat of State” who lives in Santa Marta had tested positive for the virus “in the past days” and is following protocols issued by the Health and Hygiene directorate of the city-state in relation to the coronavirus emergency. He said the official “presented some symptoms and was put in ‘isolation.’” According to the statement, the official is not in critical condition at present.

Pope Francis and his closest collaborators do not have Covid-19, but a sixth employee has tested positive, following tests carried out “on more than 170 employees of the Holy See.”

“Nevertheless as a precautionary measure,” the spokesman said, “he was hospitalized in a Roman hospital and is under observation and in close contact with the Health and Hygiene directorate.”

Mr. Bruni revealed that following this positive test—the fifth confirmed case of Covid-19 at the Vatican this month—“the measures envisaged by the health protocols” of the Vatican City State “were taken, regarding the disinfecting of the areas at the place of work and residence of the person in question, as well as the reconstructing of the contacts he had in the days prior to the test.”

Consequently, he said, the Vatican health authorities “carried out tests on the persons closest to the one identified as positive.” The results of those new tests “confirmed the absence of other positive cases among those who reside at the Santa Marta guesthouse,” but they confirmed “one other positive case among the employees of the Holy See that were in close contact with the official.”

Facing the Covid-19 storm, put your faith in the Lord, Pope Francis tells Rome and the world
Gerard O’Connell

As a result of this new positive case, the Vatican spokesman said that “as a precautionary measure...the opportune measures of disinfecting” were carried out, “and new tests were conducted.” This means that “in addition to the earlier tests, a total of more than 170 tests were carried out on employees of the Holy See and on the residents at Santa Marta guesthouse.”

Mr. Bruni confirmed that “these last tests have all given a negative result” and added that “the persons affected by Covid-19 among the employees of the Holy See and the citizens of the Vatican City State are currently six.”

The Vatican spokesman concluded his statement saying, “I can confirm that neither the Holy Father, nor any of his closest collaborators are involved.”

Mr. Bruni did not state specifically that the pope and his closest collaborators had been tested and the result was negative, but sources (who wished to remain anonymous because they were not authorized to speak publicly on the matter) told America it would be reasonable to conclude that they had.