Jesus is resolute in the face of death. Are we? 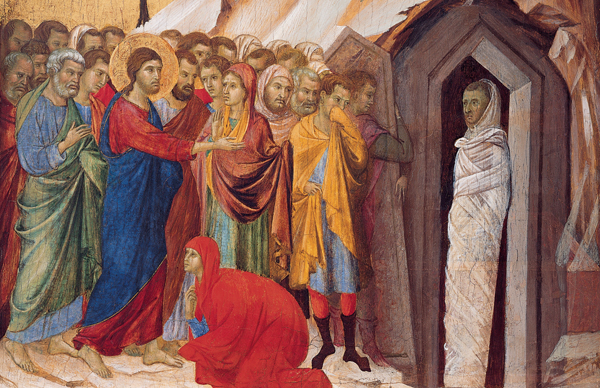 We say odd, even senseless things in the face of death. We talk of “heaven needing another angel.” We wonder why God did not take someone else, someone older, more ready. We even say, “Lord, if you had been here, my brother would not have died” (Jn 11:21).

Nothing is more certain than death. Yet normally, nothing is more hidden from our view. We do most everything that we can to not look death in the face. Death riles us, but our Lord remains serene when told that his dear friend Lazarus is sick unto death:

“This illness is not to end in death,
but is for the glory of God,
that the Son of God may be glorified through it” (Jn 11:14).

Christ is calm, yet quite committed. Jesus decides to return to Judea, the place where, not long ago, he was almost killed:

In John’s Gospel, Jesus is always resolute. He looks darkness and sin—and now even death itself—in the face. He stays staunch. The Christ knows who he is, who he came among us to be:

“Are there not twelve hours in a day?
If one walks during the day, he does not stumble,
because he sees the light of this world.
But if one walks at night, he stumbles,
because the light is not in him” (Jn 11:9-10).

What does it mean to live in the light amid coronavirus fears?
Terrance Klein

Revealing his mission, asking for belief in his own self, Jesus then assails the tomb, much like a lone knight calling up to the barricades of a fortified castle, one bristling with armaments. He tells the evil lord who holds his captives that his end has come. Jesus raises Lazarus from the dead but at a cost most dear. Having given such witness, having revealed himself so fully, the desire for his death redoubles in the gathering darkness:

And the chief priests plotted to kill Lazarus too,
because many of the Jews were turning away
and believing in Jesus because of him (Jn 12:10-11).

The beloved disciple records all of this,

that you may [come to] believe
that Jesus is the Messiah, the Son of God,
and that through this belief
you may have life in his name (Jn 20:31).

Christ himself addresses us in the words and grace of the Gospel. Are we resolute in the face of death?

“I am the resurrection and the life;
whoever believes in me, even if he dies, will live,
and everyone who lives and believes in me will never die.
Do you believe this?” (Jn 11:25-26).