What does it mean to live in the light amid coronavirus fears? 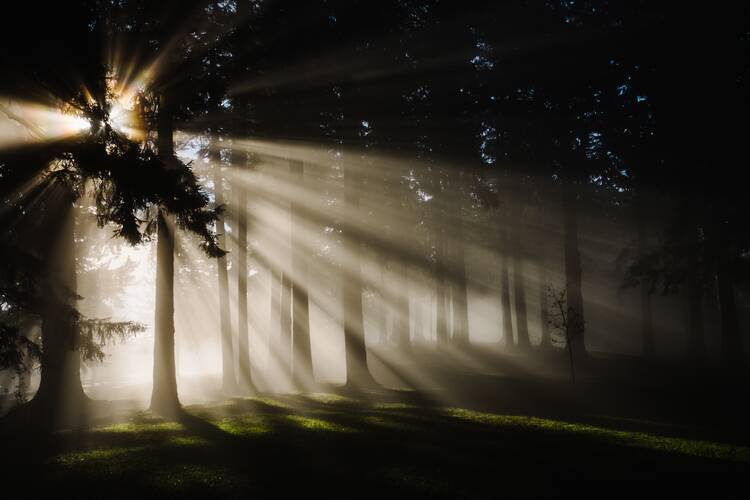 Photo by Kristine Weilert on Unsplash

A Greek word occurs in the Story of the Man Born Blind, one not used in the other Gospels. Indeed, nowhere else in the New Testament or the entirety of early Christian literature. The word is aposynagōgos. It means “expelled from the synagogue.” Of course, our word “synagogue” is itself Greek for “gathering” or “community.”  Here is the verse:

His parents said this because they were afraid
of the Jews, for the Jews had already agreed
that if anyone acknowledged him as the Christ,
he would be expelled from the synagogue (Jn 9:22).

The fourth Gospel teaches by way of strong, even extreme contrasts: life and death, sight and blindness, light and darkness. For this evangelist, Jesus is the light, who comes into this world. All men and women will divide on one side or the other of this flaming torch.

For St. John, it matters greatly that this man has been blind from birth. When he encounters Jesus, he is healed. He is given a sight he never had. As the evangelist sees it, we are all born blind. When we encounter and accept Christ, we finally truly see.

Distancing ourselves physically from each other does not mean that we scatter into the darkness of sin and selfishness.

In the same story, those who resist the light of Christ are scattering, dividing even in their own darkness. His parents are afraid to witness to the truth, lest they be expelled from the synagogue, the community. Yet the Jews, who first summon his parents and then the healed man, fall into division among themselves. Is this man a sinner? Is this truly a sign?

Having been given his sight, the Man Born Blind moves in stages to separate himself from the darkened community that cannot give light or life. He finally gives testimony to Christ. This leads to his expulsion from darkness and his entrance into life.

When Jesus heard that they had thrown him out,
he found him and said, “Do you believe in the Son of Man?”
He answered and said,
“Who is he, sir, that I may believe in him?”
Jesus said to him,
“You have seen him,
the one speaking with you is he.”
He said,
“I do believe, Lord,” and he worshiped him.
Then Jesus said,
“I came into this world for judgment,
so that those who do not see might see,
and those who do see might become blind” (Jn 9:35-39).

What is the deep spiritual truth revealed in this time of the coronavirus? God does not create evil. God never wills evil. If God permits some evil, it is only that a greater good may be accomplished, says St. Thomas Aquinas. Or as the evangelist puts it, “so that the works of God might be made visible” (Jn 9:3).

How should we carry the weight and worry that come with life?
Terrance Klein

How can you let Christ open your eyes?
Jaime L. Waters

Just now, we are told to scatter for our own safety. It is wise advice, and it should be followed. But distancing ourselves physically from each other does not mean that we scatter into the darkness of sin and selfishness.

If we choose to live in the light that has come into the world, we will give testimony to it by showing consideration for others, by trusting those in authority over us, by doing whatever acts of love and kindness the Spirit reveals to us. St. Paul told the Ephesians:

You were once darkness,
but now you are light in the Lord.
Live as children of light,
for light produces every kind of goodness
and righteousness and truth (5:8-9).

Aposynagōgos was a terrifying word in the world of the early church. Scholars believe that John’s Gospel was first addressed to those who had been expelled from their homes, their communities, because of their belief in Christ. In this Gospel, Jesus tells them and us that this will be the fate of his disciples. Living in the light separates us from darkness.

They will expel you from the synagogues;
in fact, the hour is coming
when everyone who kills you
will think he is offering worship to God (Jn 16:2).

Horrible things happen in the dark when people are afraid. We must now give witness. If we live in the light, it should be evident. Even in a time of virus.