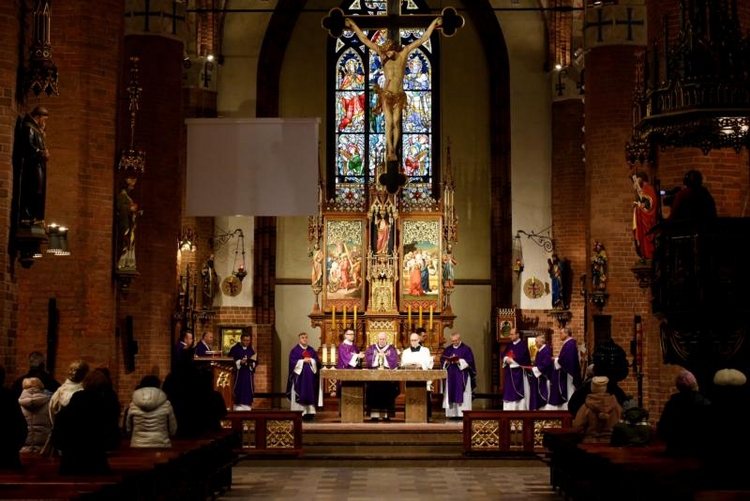 People attend a Mass for the cessation of the coronavirus epidemic at St. James Cathedral in Olsztyn, Poland, March 14, 2020. (CNS photo/Robert Robaszewski, Agencja Gazeta via Reuters)

OXFORD, England (CNS) -- Europe's Catholic shrines have followed directives for combating the coronavirus by tightly restricting organized events, although some pledged to stay open for Masses and pastoral care.

"Administering sacraments is the most important for us; as long as this remains possible, despite difficulties, we'll continue our pastoral service," said Pauline Father Waldemar Pastusiak, custodian of Poland's Jasna Gora national sanctuary.

"At this particular time, Jasna Gora provides a refuge and hope for millions of Poles. People are constantly calling us, requesting prayers and intercessions, assuring us they'll be with us spiritually, though they may not be present at a designated Mass."

He added that 100,000 people were tuning in daily to the shrine's YouTube channel for its evening Lady Chapel Mass.

In France, the northern sanctuary of Lisieux, burial place of the St. Therese and her parents, Sts. Louis and Zelie Martin, closed its doors to pilgrims March 17, complying with a 14-day government curfew on all nonessential movement.

In Lourdes, France, baths at the Marian sanctuary, which normally attracts around 5 million visitors annually, were locked in early March, and the whole complex closed March 17, for the first time since St. Bernadette Soubirous experienced visions of the Virgin Mary in 1858.

A website statement said 30 priests would continue praying at the shrine's grotto and invited Catholics worldwide to join an internet prayer novena in multiple languages until the March 25 feast of the Annunciation.

In neighboring Spain, pilgrims to Santiago de Compostela were barred from embracing a statue of St James in the Catholic cathedral, which finally closed its doors until further notice March 13.

The shrine, which attracted 350,000 visitors from 160 countries in 2019, posted a prayer on its website requesting help for COVID-19 victims, as well as "strength and wisdom for health care personnel, illumination and success for decision-makers, and generous closeness from those offering help."

At Fatima in Portugal, four Masses and rosary services were to be livestreamed each day by sanctuary staff, after all but two basement chapels of the Holy Trinity basilica were closed to visitors. All cultural and pastoral activities were suspended until Easter.

"We are living in unprecedented times of trial, experiencing a complete change to our lives' usual rhythm," Father Carlos Cabecinhas, sanctuary rector, said in a website message. "Yet this mandatory halt may offer an opportunity to evaluate life, look at what is fundamental and understand what really matters -- how we value our family life and Christian experience of prayer."

At least three European countries -- France, Italy and Spain -- had declared nationwide lockdowns by March 18. The European Union imposed an initial 30-day ban on all incoming travel March 17 to hold back the coronavirus, while several countries unilaterally closed their borders.

The shrine of Medjugorje in Bosnia-Herzegovina, where six teens said they first saw the Virgin Mary in 1981 while herding sheep, continued welcoming pilgrims March 19.

However, the pope's apostolic visitor, Polish Archbishop Henryk Hoser, told KAI all hotels and restaurants were closed, with foreign visitors unable to enter the country. Many were participating via the internet in "prayers for the world" at the shrine, the archbishop said.

At Mariazell in Austria, all Masses and religious events were suspended, although the Marian sanctuary remained open for private prayer and some confessions.

In a message, Bishop Wilhelm Krautwaschl of Graz-Seckau said the "painful but necessary regulations" had been adopted out of "responsibility and solidarity for the good of society."

The Passau Diocese in Germany said an annual April youth pilgrimage to Altotting, a Marian shrine for five centuries, had been canceled, while at Walsingham in England, shrine administrators said Masses, prayers and confessions were continuing, but asked pilgrims to refrain from touching statues and reliquaries.

Provide feedback on this article
Join the conversation: Login or create an account
Before you can comment, you need to update your profile to include your first and last name, as required in our comments policy. Then reload this page and you'll be set up for commenting. Update your profile
Advertisement
More: Coronavirus / Europe